Ransom notes have been used, throughout true crime history, to extort cash. Often related to kidnapping incidents, ransom notes are usually just the beginning of a series of events that would usually lead to the slaying of the abductee, and in some cases, the execution of the abductor.

What comes below is an overview of Top 11 such notes and the crimes surrounding them:

Robert Wiles was employed by the family owned business, Toledo-based National Flight Services, an aircraft maintenance company. Wiles was a business development manager at the company’s branch in Lakeland, Florida. Wiles was a pilot, diver, fisherman, and an athlete.

Robert Arthur Wiles disappeared from Lakeland-Linder Regional Airport in Florida, where he worked. He was last seen at work at approximately 6:30 p.m. on April 1, 2008. A few days later, his parents received a ransom note, but no further demands were made.

On January 31, 2012, Toby Holt was found guilty of manslaughter, extortion, and writing a threatening letter in connection with Wiles’ disappearance. However, Wiles has not been found. 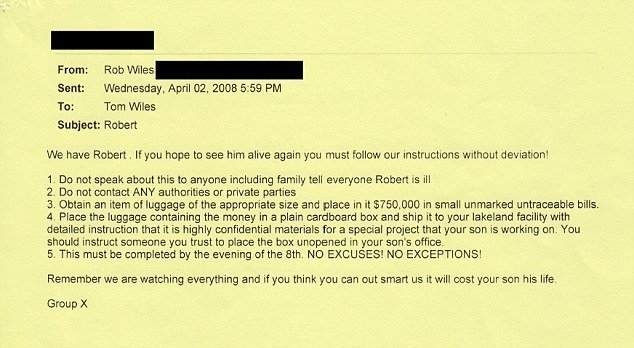 Dorothy Ann Distelhurst (January 13, 1928-September/November 1934) was a young girl living in East Nashville, Tennessee home. On September 19, 1934 she was kidnapped and her body was found less than a month later on November 13.

Dorothy Distelhurst was kidnapped on September 19, 1934, when she was walking home from kindergarten which was three blocks to her East Nashville Tennessee home, and was last seen wearing a blue/white plaid dress and carrying a pink lunch pail. How exactly she got kidnapped is unknown however parents soon alerted the police and an investigation was launched. 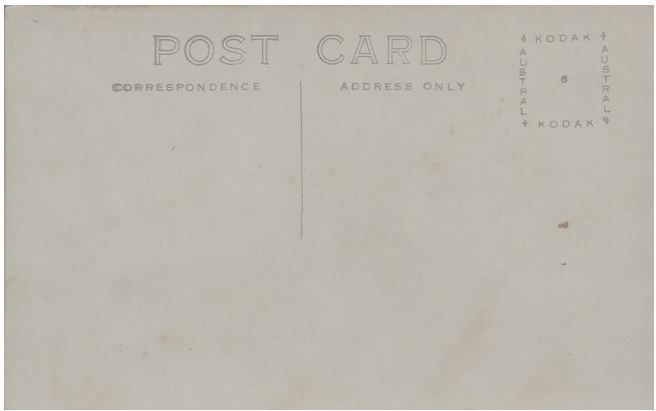 When the disappearance hit the news Dorothy’s parents was flooded with a large number of ransom notes, meaning they didn’t know which one to believe. However one ransom stuck out, it stated that if they didn’t pay the kidnapper(s) US$5,000 (US$130,000 in 2020), then Dorothy would have her eyes burned out with acid.

Unfortunately Dorothy would not be found alive. On November 13, 1934, Dorothy’s lifeless body was found underground in a casket by hospital workers. Her clothes and lunch box was found twenty feet away.

An autopsy report concluded that Dorothy had been dead for weeks, her skull was fractured most likely by a hammer.

Seventy-two-year-old Annie Laurie Hearin was the wife of wealthy businessman Robert Hearin Sr.; the two had been married for forty-eight years. She was abducted on the afternoon of July 26, 1988. Earlier that day, she had several friends over. Robert came home in the afternoon to find her not home. After calling several friends and family, he called the police to report her missing.

Investigators discovered drops of blood on the carpet and blood smears on the front door of the residence. Neighbors also reported seeing a suspicious pickup truck and a white van with Florida plates driving by her home. Analysts determined that the blood matched Annie Laurie’s type. Authorities believe that she may have been struck on the head by an intruder, as indicated by blood smears on the door. A ransom note was also found near the door, which was typewritten and contained numerous grammatical and spelling errors. The note stated, in part:

Mr. Robert Herrin, Put these people back in the shape they was in before they got mixed up with School Pictures. Pay them whatever damages they want and tell them all this so then can no what you are doing but dont tell them why you are doing it. Do this before ten days pass. Don’t call police.

Rather than pay the ransom, Robert made a public appeal for his wife’s return. Then he received a second note, this time allegedly from Annie:

Bob, If you don’t do what these people want you to do, they are going to seal me up in the cellar of this house with only a few jugs of water. Please save me, Annie Laurie.

Even after paying out the ransom, he never saw his wife again. In 1990, law enforcement apprehended Newton A. Winn and convicted him of conspiracy in relation to Hearin’s disappearance. The courts never filed charges, and investigators never recovered Hearin’s body, as she was declared dead in 1991.

On August 3rd, 1961 the National Gallery in London’s Trafalgar Square proudly unveiled its latest acquisition: what is known as the bust portrait of the Duke of Wellington by the Spanish master Francisco de Goya (1746-1828), painted during the Peninsular War and completed in 1814.

Eighteen days later the duke went absent without leave from the gallery. His unauthorized removal made headline news, stumped all attempts by Scotland Yard to solve the crime and, in 1968, prompted the Government to introduce a new criminal offence.

JonBenét was only 6 years old when she was found dead in the basement of her parent’s home on Dec. 26, 1996. The case was widely televised and suspicion fell on her parents, John and Patsy Ramsey, who denied having anything to do with JonBenét’s death and insisted an intruder was to blame.

June Cecilia Robles was a notable kidnapping victim from Tucson, Arizona. Though she survived her ordeal, the person or persons responsible for her abduction were never apprehended.

In 1934, an unknown man abducted 6-year-old June Robles – daughter of Fernando Robles, the owner of the Robles Electric Company – outside of her school in Tucson. After the kidnapping, the man paid a young boy 25 cents to deliver a note to Fernando demanding $15,000 for June’s safe return. The mystery man only referred to himself as “Z” and instructed Fernando not to speak with the police.

After a lot of back and forth, “Z” cut contact with Fernando. Then the Governor of Arizona received a postcard mailed from Chicago that gave him instructions as to where June was being kept in the desert. It took highway patrolmen two hours to find June, who was locked in a small metal cage and buried under some shrubbery. She was alive and unharmed.

Charles Brewster “Charley” Ross was the primary victim of the first American kidnapping for ransom to receive widespread media coverage. His fate remains unknown, and his case is one of the most famous disappearances in US history.

On July 1, 1874, four-year-old Ross and his five-year-old brother Walter Lewis were playing in the front yard of their family’s home in Germantown, a well-to-do section of Philadelphia, Pennsylvania. A horse-drawn carriage pulled up and they were approached by two men who offered the boys candy and fireworks if they would take a ride with them. The boys agreed and they all proceeded through Philadelphia to a store where Walter was directed to buy fireworks inside with 25 cents given to him. Walter did so, but the carriage left without him. Charley Ross was never seen again.

On July 4, 1956, 20-month-old Peter Weinberger was kidnapped from the front patio of his parents’ home in Westbury, Long Island.

Certainly the fallout from the incident reached national proportions. This child was not from a well-to-do family, like the Lindberghs. This child came from a middle class family in suburbia—where people weren’t afraid of being targeted by extortionists. The Weinberger kidnapping struck fear in the hearts of average Americans. People started locking their doors. Almost overnight, an entire country lost its sense of security. 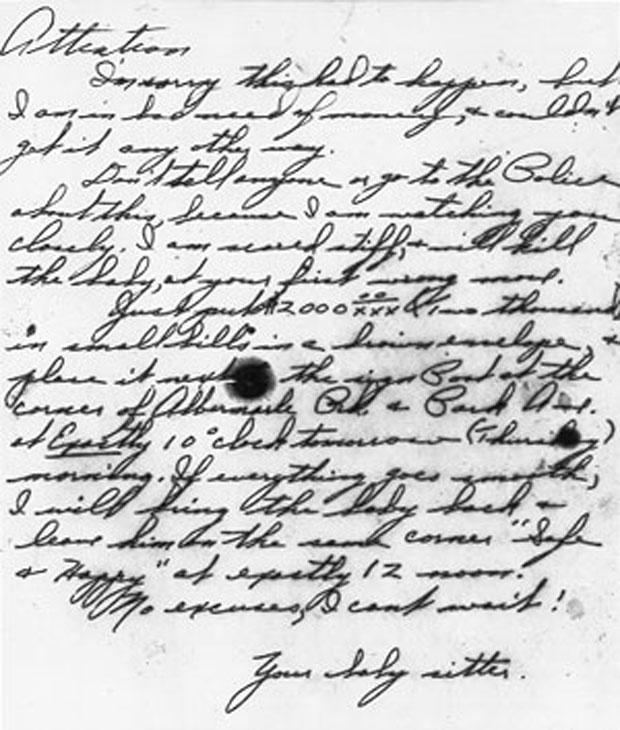 John Paul Getty III was the grandson of American oil tycoon J. Paul Getty, who was once the richest man in the world. While living in Rome in 1973, he was kidnapped by the ‘Ndrangheta and held for a $17 million ransom.

Getty’s grandfather refused to pay the ransom, so the next letter they received came with one of Getty’s ears and the threat:

This is Paul’s ear. If we don’t get some money within 10 days, then the other ear will arrive. In other words, he will arrive in little bits.

Getty’s family reluctantly paid the decreased ransom, and their son was safely returned. Italian authorities convicted two of the kidnappers, but the rest of the men involved were acquitted.

Marion Parker (October 11, 1915 – December 17, 1927) was an American child who was abducted and murdered in Los Angeles, California. Her murder was deemed by the Los Angeles Times “the most horrible crime of the 1920s,” and at the time was considered the most horrific crime in California history.

Parker went missing from Mount Vernon Junior High School in the Lafayette Square section of Los Angeles on December 15, 1927. She was excused from class by the registrar, Mary Holt, after a man—presenting himself as an employee of the bank where Perry Parker worked—claimed that Perry had suffered an automobile accident and wished to see his daughter; the man, apparently unaware of Marion’s twin sister, Marjorie, was given possession of Marion.

Holt later claimed that she “never would have let Marion go but for the apparent sincerity and disarming manner of the man.” Parker was reported missing later that day.

William George Heirens was an American convicted of murder who confessed to three murders in 1946. Heirens was called the Lipstick Killer after a notorious message scrawled in lipstick at a crime scene. At the time of his death, Heirens was reputedly Chicago’s longest-serving prisoner, having spent 65 years in prison.

In late 1945, the Lipstick Killer left a note for police scrawled in lipstick on the wall of the second victim’s Chicago-area apartment after slaying two women: “For heavens Sake catch me Before I kill more I cannot control myself.”