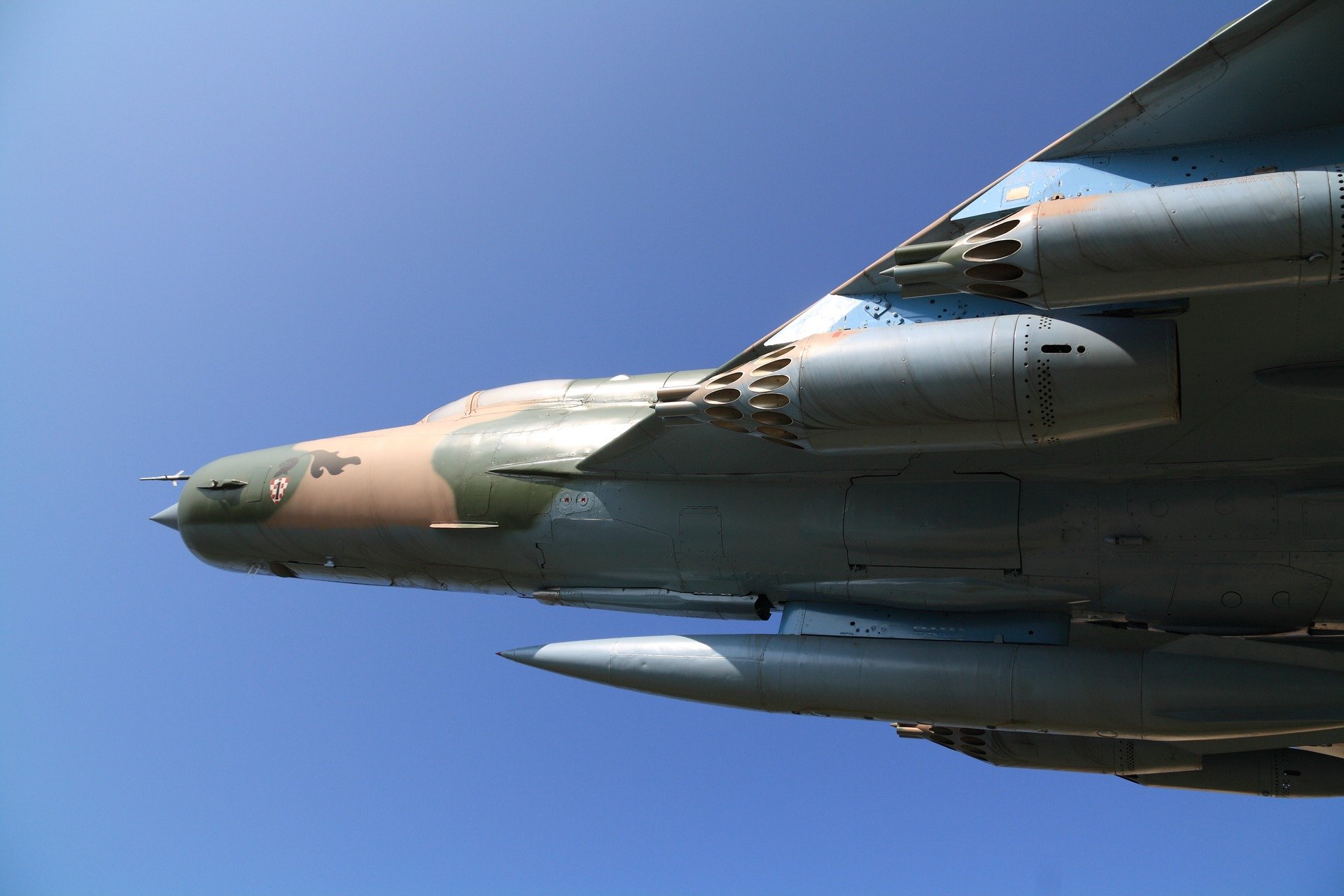 Red Metal is the first standalone novel by #1 New York Times bestselling author Mark Greaney and USMC Lt. Col. Hunter Ripley Rawlings IV and one of the best espionage thrillers of this year so far.

In Red Metal, a desperate Kremlin takes advantage of a military crisis in Asia to simultaneously strike into Western Europe and invade east Africa in a bid to occupy three Rare Earth mineral mines that will give Russia unprecedented control for generations over the world’s hi-tech sector.

Pitted against the Russians are a Marine lieutenant colonel pulled out of a cushy job at the Pentagon and thrown into the fray in Africa, a French Special Forces captain and his intelligence operative father, a young Polish female partisan fighter, an A-10 Warthog pilot, and the commander of an American tank platoon who, along with his German counterpart, fight from behind enemy lines in Germany all the way into Russia.

From a daring MiG attack on American satellites, through land and air battles in all theaters, naval battles in the Arabian sea, and small unit fighting down to the hand-to-hand level in the jungle, Russia’s forces battle to either take the mines or detonate a nuclear device to prevent the West from exploiting them.

What follows is an excerpt from Red Metal, provided to Mystery Tribune by Berkley Publishing.

Major Yuri Vladimirovich Borbikov hated this hot, filthy, nothing part of Africa, but he was ready to die for it.

And as he looked out over the jungle and down the hill to the flatlands below, he thought the odds were stacked in favor of his doing just that today.

The forces arrayed against him were preparing to attack this very morning, and all intelligence reports indicated they would advance up the hill, destroy everything in their path, and take this position. Borbikov and his men could slow them and bloody them, but ultimately could not stop them.

Nine kilometers distant, hidden from his view by a thick jungle wood line, a coalition of French, Kenyan, and Canadian soldiers waited with helicopters and armored personnel carriers.

Their artillery was in place and their multiple‑ launch rocket systems were ranged on Borbikov’s position. The Russian didn’t know the enemy’s total strength exactly, but his intelligence reports indicated his small force might be outnumbered seven to one.

Borbikov’s communications officer and a dozen troops stood or knelt with him on the roof of this two‑story cinder‑block building and peered out through narrow partitions in the wall of sandbags erected to protect a pair of 82mm mortars set up behind them.

This fighting position wouldn’t survive twenty seconds of concentrated shelling, but Borbikov chanced coming up here because he wanted to look out over the battlefield himself: an officer’s wish for any last bit of intelligence before the commencement of hostilities.

Yuri Borbikov was in command of a company of specially trained troops, members of the 3rd Guard Separate Spetsnaz Brigade of the Armed Forces of the Russian Federation.  Eighty‑ eight men in all, they were dispersed now in their defensive positions, manning machine guns, mortars,  shoulder‑ fired rockets, and air defense weapons.

Yuri Borbikov was in command of a company of specially trained troops, members of the 3rd Guard Separate Spetsnaz Brigade of the Armed Forces of the Russian Federation.

There was a larger contingent of Russian paratroopers here as well: two companies from the 51st Guards Airborne Regiment, five hundred men strong, and while they weren’t as well trained as the Spetsnaz unit, they had spent the last five weeks digging in and preparing for the attack that had seemed more inevitable by the day, and Borbikov fully expected the boys from the 51st Guard to fight valiantly.

But he knew it would not be enough. The major was a highly trained infantry officer; he’d graduated at the top of his class from the coveted Combined Arms Academy of the Armed Forces of the Russian Federation in Moscow, and he had been here in‑country long enough to have an al‑most perfect tactical picture of the battlefield.

And all his knowledge told him there was little chance he could defend this hill for more than a couple of hours.

The Russians had been cut off for the past three weeks and were low on food, water, and other provisions, and there was no way they could be re‑supplied from home, because the French had brought in significant numbers of Mistral surface‑to‑air missiles to prevent just such an attempt.

Borbikov knew defending this location might mean death for himself and his men, but he strongly preferred death to dishonor. He was a true believer in the Russian Federation; he’d long ago bought into the notion that the West was continuously plotting against the interests of his motherland, and he felt surrender here today would bring disgrace on himself and his troops.

Experts said the concentration of highly valuable rare‑earth minerals here was like nowhere else on earth.

Russia had sent troops to defend a few square miles of rocky scrubland and jungle in a remote part of Africa because something had been found under the dirt here in southeastern Kenya, and that something had been determined to be necessary for the survival of the Russian government, economy, and military.

Experts said the concentration of highly valuable rare‑earth minerals here was like nowhere else on earth. Fully 60 percent of the world’s known supply of eleven of the seventeen essential minerals was thought to be un‑der the soil and rock just behind the Russian lines.

Russia now held this ground because the country had discovered, purchased, and developed the mine, and even though the Kenyan government had invalidated the contract after accusations of corruption surfaced and ordered the Russians to vacate, Borbikov knew Russia would be crazy to relinquish it without one hell of a fight.

The Kenyans and the French soon notified the defenders of Mrima Hill that the sovereign territory of the Republic of Kenya would be retaken by force without delay.

That call had come five hours earlier, just after midnight, and despite the fact he and his men were seriously outnumbered, Yuri Borbikov was ready to get to it. Five weeks of waiting and talking were over. He was a man of action; at this point he considered fighting a welcome diversion from the boredom of the siege.

Borbikov caught his acid tongue before it let loose something he would regret, and instead said, “I’m sorry, Colonel, but this position is not safe.

In the distance now he heard engines, and his ears were tuned to listen for the sound of the inevitable firing of artillery as the softening‑ up stage of the attack began.

But it was a different sound altogether that he heard: the metallic creak of the stairwell door as it opened behind him. Borbikov turned around, ready to scream at one of his men for leaving his defensive position.

But it wasn’t one of his men. It was Lieutenant Colonel Yelchin of the 51st Guards Airborne Regiment. While Major Borbikov was in charge of the Spetsnaz force here, Yelchin had command authority over the entire mine and all the troops.

Borbikov caught his acid tongue before it let loose something he would regret, and instead said, “I’m sorry, Colonel, but this position is not safe. The artillery could begin at any time.” Yelchin stepped up to Borbikov’s sandbagged overwatch. “Good news, Yuri. There will be no attack. We have been ordered to lower our weapons and go to Mombasa to await transport back to Russia.” He grinned. “It’s over.”

Borbikov leaned back against the sandbags, utterly stunned. “Chto?” (“What?”)

“Da. Moscow has worked it out with the Kenyans. We have four hours to pack and vacate. We’ll obviously have to leave some of— ”

“Sir, did you explain to Moscow that we can repel the coalition attack? At least the first wave. We can hold them off, target their antiair missiles, and if we get lucky, take them out. Once we get resupply from our aircraft, additional Spetsnaz, and airborne troops, we can—  ”

The colonel interrupted the major. “I did not explain any of that, be‑cause this is a political decision, Yuri. The tactics weren’t discussed.”

“Sir, you know the Kenya Defence Forces. Even with help from the French, they aren’t ready for a fight. Their tanks are from the 1960s, their artillery is unreliable shit from Serbia, and they won’t expect the fury they’ll face when they come up this hill.”

“They aren’t coming up this hill. We are going down it. Four hours.”

Borbikov muttered to himself. “Unbelievable.”

Yelchin regarded the special forces major now. “I get it, Yuri. You actually want to fight.”

“What I want is to get the hell out of this shithole and back home to my family. I want to eat real food and drink clean water.” He pointed to the blazing morning sun. “I want motherfucking air‑ conditioning!”

Borbikov did not hide his disdain now. “Air‑ conditioning, sir?”

The lieutenant colonel softened a little. “Look, Yuri. Your passion is admirable, as is your bravery. But we do what we’re told.”

Colonel Yelchin turned and left the roof without another word.

For an excerpt of Mission Critical, another thriller novel by Mark Greaney, see here.