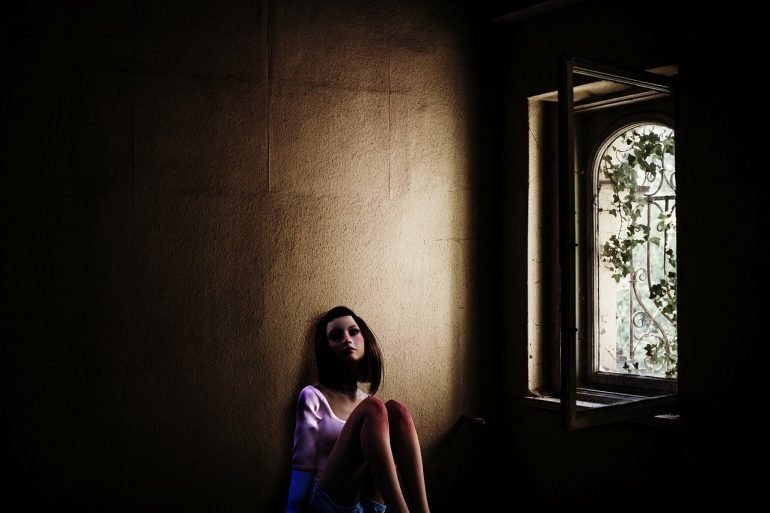 M. H. Perry, author of The One Bad Thing, has recently published the essay “Farewell to Agro” (Boulevard, 2020) and a poetry chapbook called The Country We Live In (The Heartland Review Press, 2019). Her poem “Fragile Animals” was nominated for a Pushcart Prize in 2019.

He looked younger when he slept, his hair pale rather than gray in the dim light, his left arm thrown across his eyes in case this was a dream and he needed to preserve the illusion when he woke. It was their first night together. There was a conference at the Hyatt, Maury had told his wife, which was true.

If she checked the credit card bill, he would tell her the rooms were sold out and he’d had to stay at the Swiss, which was not true, just insurance against him running into anyone he knew. He had checked in alone, had one drink at the bar to leave an appropriate paper trail, and then joined Sylvie in the elevator with a bottle of champagne he’d paid the bartender cash and a little extra for. They barely made it to the bed: Being bad may be an aphrodisiac, but being bad with no chance of being caught was pure GHB.

Sylvie could name the exact date she met Maury because it also was the day her parents squealed out of the VFW parking lot and crashed through the railing on the overhead bridge, landing upside down across the railroad tracks below. Neither one of them was hurt—excess alcohol apparently turned their bones to rubber.

If she checked the credit card bill, he would tell her the rooms were sold out and he’d had to stay at the Swiss, which was not true…

And while public intoxication is not a crime in Illinois, driving while drunk and destroying public property are punishable offenses. Both of her parents would have had to pay a hefty fine and do some jail time if Maury, who needed a few more pro bono hours for the quarter, hadn’t gotten them off with revoked licenses and community service on account of Sylvie, the minor child for whom they were responsible.

“Are you going to use air quotes when you say that to the judge?” Sylvie had asked Maury a few days before her parents’ sentencing.

When Maury was nervous, he looked away and began to whistle softly. He turned back to the teenager whose long, dark hair spilled over breasts that were themselves spilling out of the bra she wore under her pink tee shirt. “Are you telling me your parents are not responsible?”

She laughed. “I’m telling you I’ve been disengaging them from their own vomit since I was twelve and my only brother left me to join the army.”

“I take it you don’t care for them.” He’d waited for her to say “duh,” as his own children would, their one-syllable rebuke for his habitually stupid questions. When she said nothing, he gave her some advice. “If I allowed myself to reduce people to the one bad thing they’ve done—the one thing that resulted in their needing a lawyer—I’d never get out of bed in the morning, Sylvie. Even your parents must be more than drunks.”

It was hard to tell. As far back as Sylvie could remember, her parents had had three gears, drinking, drunk, and hungover. She made a point of asking her brother when he called that weekend: Larry was eight years older than she was; he’d known their parents when they still noticed that someone else lived in the house with them, someone who might actually want his parents to come to an awards night at school or throw him a birthday party.

“Don’t kid yourself, Sis—they might have been smiling while the candles were burning, but they were drunk as skunks. Five seconds later dad was letting the boys take turns dropping shots in a beer glass, and mom was shaking her tits to ‘Crazy Train.’”

Larry and Sylvie were siblings, but they also were friends, a common occurrence among the children of drunks. His active duty stint was ending soon, and he and Sylvie had made plans to move in together after she graduated. She’d get a job and put money away for college; he’d go to the police academy. She’d do the housework; he’d pay the bills. Unbeknownst to him, she had begun buying good used housewares at garage sales. Unbeknownst to her, he had begun looking for an apartment.

One Year Ago. Urbana, Illinois.

By the spring of her junior year, Sylvie was working in Maury’s law office after school, transcribing client interviews under the direction of his office manager. Mrs. Sweeney had lectured her on confidentiality, made her sign an affidavit that she would not disclose privileged information, and the assigned her to a desk wedged between two filing cabinets in the backroom.

She rarely saw Maury, other than for a quick smile and a “How you doing?” and she was surprised he was so easy to forget once she put on her headphones. (NB: This is not the way Maury felt at all– If Sylvie was in the office for two hours, he was distracted for an hour and forty-eight minutes by the thought of the heat her bottom generated on the typist’s chair.) But to do her job well, Sylvie needed to focus. The only distraction she allowed herself was a modicum of schadenfreude at Maury’s clients’ misfortunes, especially when they were people she knew.

Roger Darling, who’d been arrested for dealing cocaine, was the pervy son of a couple who lived on Sylvie’s block. When she was thirteen, he’d motioned her over to his car, and like an idiot, she’d gone, only to find him whacking on his limp dick. Of course he claimed to be innocent of the charges against him. “Pure as the driven snow,” he told Maury, not bothering to suppress a laugh.

Midway through the rambling interview, Darling’s voice grew hoarse, and he claimed he was having chest pains. Sylvie could hear the door open, likely when Maury stepped out of the room to go get help. Darling, meanwhile, made a phone call. Sylvie listened, her fingers poised in the air over the keyboard.

“It’s me—calling from my lawyer’s cellphone. No shit, he gave it to me. Listen– based on what he’s saying, I’m not getting out of here anytime soon. I hid a backpack in the crawlspace that I want you to move to the big tool chest in my old man’s garage. Key’s in a baggie taped inside the lid of the grill. There’s ten bricks of coke in that bag, but I promised them to Scotty, so don’t you fucking touch it, you hear me? I’ll fucking kill you if you do, which means I’ll see you in hell, cause Scotty will kill me next.”

At the library that evening, Sylvie did some research. Powdered cocaine sold for about $100 per gram. A brick was a kilo, i.e. 1000 grams, so ten bricks were worth $100,000. Roger Darling’s goose really would be cooked if the cops found his stash, and it would serve the tallywhacker whacker right.

But what about Maury’s goose? Sylvie had learned enough from Mrs. Sweeney to doubt that “attorney-client privilege” pertained to Darling’s call, which meant that once Maury knew about it, he would be obligated to turn him in. But Darling was smarter than he looked: He’d told his buddy that his lawyer had let him use his phone to make him appear complicit. What if this silly mistake became Maury’s one bad thing?

Sylvie packed up her book bag and headed home. There was a light on in the kitchen, which meant her parents still were up. While she lingered on the front steps, her cell phone began to vibrate: Her brother was calling.

For a second, her heart lifted. But hope was a feathered thing, and this, apparently, was pheasant hunting season. No, no, Larry was fine: A second before the IED exploded, he bent down to pick up a cigarette, and rather than him, three of his buddies were killed. The problem was he felt he owed it to them to re-up.

It meant another year of living with her parents while she earned enough money to augment the college financial aid package she’d been offered. But because she loved her brother, she’d sucked up the pain and exhaled it evenly so Larry would not hear. “It’s what you have to do,” she’d said.

Once it was pitch dark, she pulled up her hoodie and crept down the alley to the Darling’s garage, where she did what she had to do.

Sylvie was sitting in a swanky hotel with a bottle of champagne between her knees, trying to decide when to tell Maury. Not yet: They were going to the Warhol exhibit tomorrow afternoon and then to dinner at Spiaggia. She poured the last of the wine into her glass, tilting it so that it would not foam. Maury slept on, his penis– small and red and slick from use– laying on top of his pubic hair like food for nestlings.

She’d tell him when he dropped her off at the train station on Sunday afternoon. On his drive home, he’d realize that tipping off the police about the eight bricks of cocaine her parents had stashed under their mattress was the kindest gesture she could manage. It would also occur to him she’d packed far too much for two nights away from home.

If you’ve enjoyed The One Bad Thing, you can visit our free digital archive of flash fiction here. Additionally, premium short fiction published by Mystery Tribune on a quarterly basis is available digitally here.