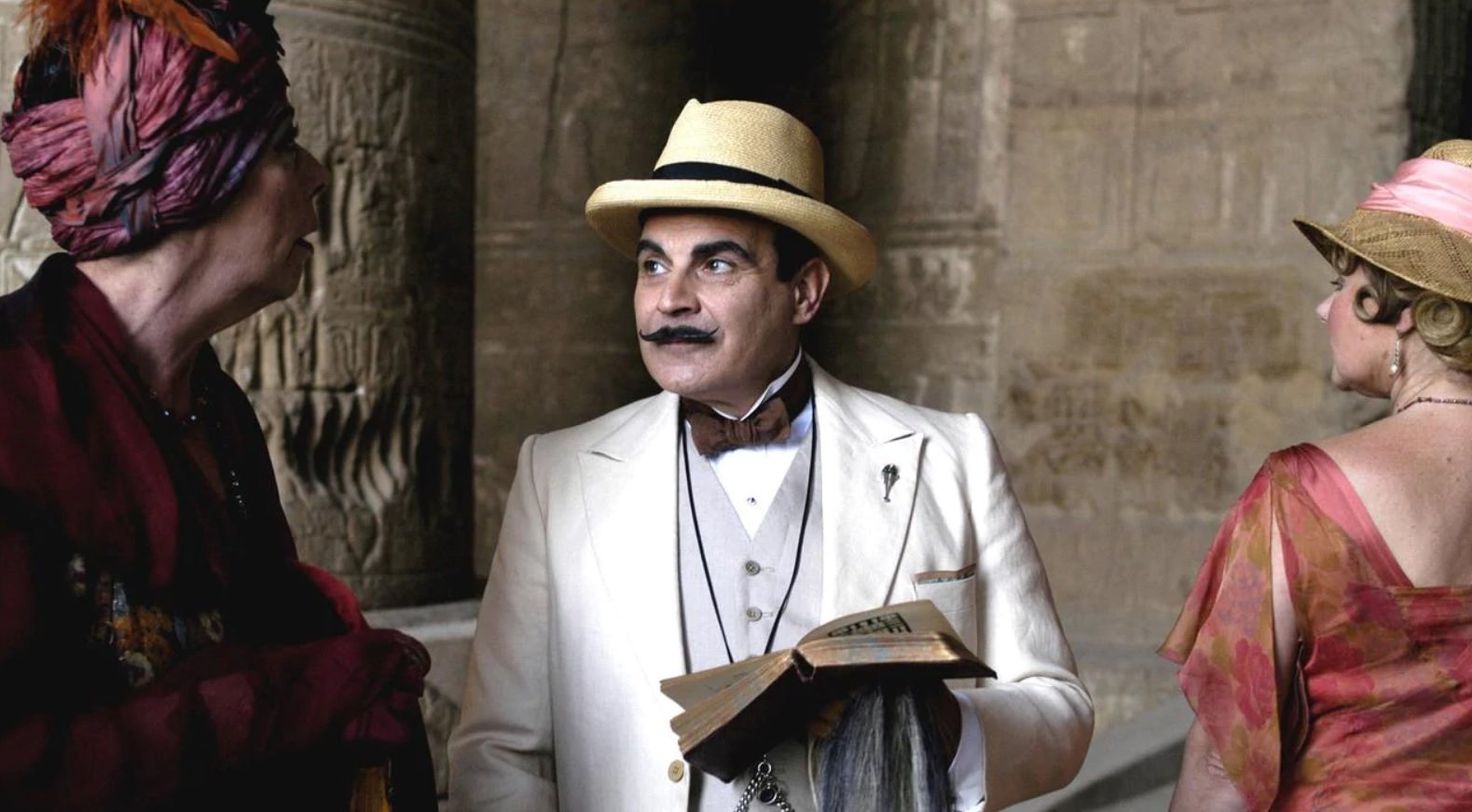 Scott Adlerberg takes a closer look at ITV Production of the iconic Agatha Christie novel “Death on the Nile”.

The first adaptation for film or TV of an Agatha Christie novel was the 1928 movie The Passing of Mr. Quin.  It’s a British film, shot in London, and it derives from the short story called “The Coming of Mr. Quinn”, the first story in the collection The Mysterious Mr. Quin, published in 1930.  Working together, two directors made the film, and one of the two was a man named Leslie S. Hiscott, who in 1931 directed the first Hercule Poirot film adaptation.

This was titled Alibi and adapted from a 1928 play of the same name, a drama taken from the classic Christie novel, The Murder of Roger Ackroyd.  While it’s worth noting that the great Charles Laughton played Poirot in this stage production, a now forgotten Northern Irish actor named Austin Trevor portrayed Poirot in the film, and Trevor  then went on to star as the Belgian detective in two more Christie adaptations, Black Coffee in 1931 and Lord Edgeware Dies in 1934.

Trevor said that he only got the Poirot role because he could speak with a French accent (a mistake about Poirot’s nationality straight out of a Christie novel), but whatever the reason he became the first movie incarnation of the Belgian sleuth, it’s clear that from about ten years into her career, filmmakers and dramatists were figuring out ways to translate Christie into their particular medium.

That was, we know, just the beginning.  Not a decade has passed since when film, television and the stage haven’t revisited Christie numerous times.  It has reached the point where the same Christie works keep getting remade over and over.  If you’re a Christie fan, it’s almost certain by this point that you know the plots to the books and stories the scripts will be based on, and yet somehow the appeal of these remakes upon remakes never ends.

Not a decade has passed since when film, television and the stage haven’t revisited Christie numerous times.

Though it received mixed reviews, the 2018 Kenneth Branagh version of Murder on the Orient Express succeeded worldwide at the box office, and sometime very soon, a follow-up, Death on the Nile, also starring and directed by Branagh, will be released.  This repeats the exact pattern of the two Christie films from 1974 and 1978, when Albert Finney and Peter Ustinov, in big budget adaptations of each novel, played Poirot.

Of these three actors, I like Ustinov’s take on the character, with his wit and trace of warmth, but I regard Finney as the best, getting the detective’s chilliness right as well as his outsize vanity.  Still, the greatest Poirot of all, on film or television, the most Poirot of all the Poirots – in voice, style, walk, and gesture, in his top to bottom depiction of the man – is David Suchet, the actor who embodied him for ITV from 1989 to 2013.

Over the course of those 25 years, through 70 episodes of Agatha Christie’s Poirot, Suchet essentially covered the entire Poirot canon, and in 2004 there he was in the series’ adaptation of Death on the Nile.  To help mark the coming of the new Branagh film, Acorn has recently released the TV episode on DVD and Blu-ray, and it’s this small-screen version I will look at here.

Is there any need to rehash the plot?  If you’re reading this, the chances are you’re familiar with what happens.  If you haven’t read the original novel or seen either visual version, you know the general structure regardless.  Poirot is traveling, this time on holiday in 1930’s Egypt, and he boards a Nile River cruise ship where a number of the other passengers are connected to each other.

In particular, newlyweds Simon Doyle and Linnet Ridgeway are being followed, threatened, and taunted by Simon’s ex-fiance, Jackie De Bellefort.  Of humble background, Jackie feels that the wealthy Linnet stole Simon from her, and she gives every indication of wanting to extract revenge.

On board too are a number of people who, in the usual Christie fashion, have their quirks and secrets, and eventually Poirot finds himself enmeshed in his favorite element, crime with deadly intent.  First there is an attempted murder, then a killing that succeeds.  By this time, Poirot’s friend, Colonel Race, has come aboard ship – he had been on a diplomatic mission in Egypt – and because of his British government standing, the boat’s management is fine with him directing an investigation.

Everyone puts themselves at his disposition, and this allows Poirot to interrogate everyone as he sees fit.  In due course, Poirot solves the murder, and the solution involves what can only be called vintage Christie misdirection.

The ITV production, as expected, is superb.  It’s fun to see Emily Blunt, before her feature film debut in My Summer of Love and before her break-out performance in The Devil Wears Prada, play Linnet Ridgeway.  If her American accent sounds a tad over-exaggerated, she carries herself with aplomb as a woman of affluence.  Francesca de la Tour, who could read the proverbial phone book and make it amusing, lays with gusto into every line in her role as romance novelist Salome Otterbourne.

… let’s face it: a lot of the interest in watching Christie adaptations today is not unlike the pleasure to be had in comparing actors doing Hamlet or Macbeth or somebody else created by the Bard.

David Soul, years removed from cleaning up Southern Californian streets in Starsky and Hutch, is the slightly shifty American who pops up often enough in Christie tales; he plays Linnet’s trustee, someone determined to appear financially solid but who, clearly, isn’t.  And who more appropriate to play the epitome of British empire, Colonel Race, than the estimable James Fox, who is so at ease in his role, you’d think the character was written for him.

I would not say that Agatha Christie has the richness of Shakespeare, but let’s face it: a lot of the interest in watching Christie adaptations today is not unlike the pleasure to be had in comparing actors doing Hamlet or Macbeth or somebody else created by the Bard.  As a viewer, you’re curious to see a new interpretation.

Nuance is important. The 1978 Death on the Nile had an entertaining all-star cast (Bette Davis, Mia Farrow, Maggie Smith, Angela Lansbury, and David Niven, to name a few), but the performances in the ITV rendition match it.  Adding to the enjoyment, you get the sense that the actors are having a ball doing their parts.

Nuance is important. The 1978 Death on the Nile had an entertaining all-star cast

You chuckle taking in the gratification they exude sinking their teeth into people at once shallow and juicy.  That the cast got to film the episode in Egypt must have made everything for them that much better.  The ship used was the PS Sudan, an actual side-wheel paddle steamer from the old Thomas Cook Nile River fleet, and the building shown in an early scene, before the cruise, is the gorgeous Winter Place Hotel in Luxor, where Agatha Christie wrote her book.  In this adaptation, you are without question in Christie’s world, and for one hour and forty minutes, you forget your current problems and woes and escape to a place that now exists as a mystery lover’s alternate universe.

With this Death on the Nile fresh in my mind, will I watch the new adaptation when that comes out?  Why, when I think about it, would I?  What’s the point?  Besides this version, I read the book and saw the 1978 movie.  But that’s the irony.  For many who love detective fiction, knowing who committed the crime doesn’t really matter anymore.  Death on the Nile is a perfect example.  The pleasure isn’t in the solution alone, but in the trip getting to it.

For Mystery Tribune’s coverage of books, movies and TV series adapted from the work of Agatha Christie, please visit here. 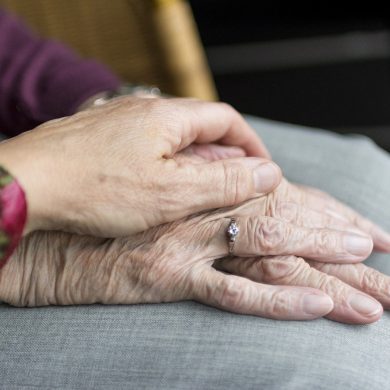 A Review of Audible True-Crime Original “My Lost Family”