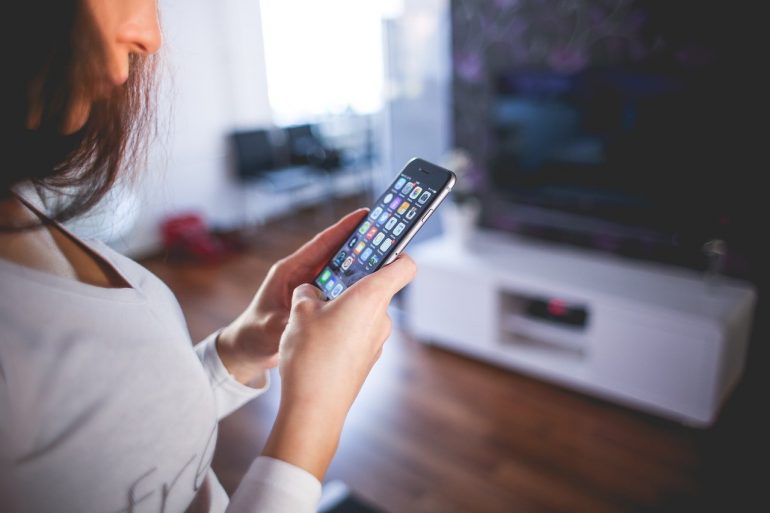 Christina MacKinnon, author of The Influencer, has a B.S. in Political Science and is currently living in Los Angeles. She has previously published short fiction at A Big Whoopie Deal.

Cassie fiddled with her iPhone, tilting the screen up to check an incoming notification. Three new followers and seventy-five new likes on Instagram. She sighed, scanning the large, circular dining room again for Vaughn’s salt and pepper hair. There were a couple of attractive older men dining tonight, but none were her husband. Damnit. She was exhausted, and her heavy brown wig itched.

Trying to catch her husband cheating on her in a four-star ski resort was not her idea of a super-fun weekend. She should be poolside at the Standard Hotel, but three things happened on Thursday to change her plans. First, Vaughn had another last-minute business trip come up that she wasn’t invited to.

Second, his driver (whose social media accounts Cassie had found like, five seconds after he was hired) posted a selfie at Maclellan’s Steak House, which was kitty-corner from the private airport in Valencia. Vaughn never flew private for business; his company manufactured weapons, and by law, his clients were all in the US government. Third, in a frenzied search of his office, she’d found a crumpled up handwritten note with a series of names jotted down. Women’s names.

There were a couple of attractive older men dining tonight, but none were her husband.

From there, it was a simple matter of calling Vaughn’s assistant, Mallory, pretending to be a client, needing to fax paperwork. When the fax number turned out to be for the second fanciest ski lodge on the west coast, buying a plane ticket, booking a rental car, and packing her stuff happened almost automatically. All the while those names beat like a drum in her head: Georgia, Samara, Jordan. Which one of them was hanging on his arm right now?

“Anything else, ma’am? Or just the check?” The waitress hovered with a tired smile.

Cassie opened her wallet, hand moving to her husband’s credit card, before realizing she was pretending she wasn’t Vaughn Young’s hot, blonde, social media influencer wife on this trip. She was just some sad brown-haired lady alone on a vacation, who paid in cash.

Outside the wind was icy, but the night sky was clear and gorgeous. Cassie took her phone out and snapped a few pictures of the stars. She was already thinking up captions for the post, “Los Angeles might be where the celebrities live, but in the mountains, you can really see STARS,” or something like that, she was still thinking about it, when she heard a laugh echoing down the hill she would recognize anywhere.

Cassie pulled her coat tighter around her and followed the sound. The snow was crunching underfoot, so she waited until the wind picked up and gave her more sound cover, making her way to the tree-lined skiing area below. Her heart pounded in her ears, fury pushing her forward. They had only been married for a year. Ten years, two kids in – maybe, maybe she could understand an affair then, but one year? For God’s sake, she was still giving him blow jobs.

She crept closer to a pocket of trees and crouched behind a bush. She saw Vaughn and Mallory, their faces lit by the blue screens of their phones, standing huddled in front of an old hammock.

“Why did we have to do this out here, anyway?” Mallory opened a briefcase and handed Vaughn a folder.

Vaughn ignored her, looking through the paperwork inside. “Was there anything else?”

“Yeah, they told me to tell you to meet them in Moscow.” Mallory scrunched her nose. “That doesn’t sound like a fun vacation.”

“It’s not, you idiot. It’s code.” Vaughn cracked his neck, “For ‘kill the messenger.’” He swung his hand up from behind his back with practiced ease and shot Mallory in the head. Cassie screamed as she watched Mallory’s body careen backward into the hammock, which began swinging gently back and forth.

Vaughn’s gun was on Cassie the second she stood up from the brush. “What are you doing here?”

Vaughn’s eyebrows rose. “You’re kidding. You thought I was cheating.” He laughed, glancing behind himself at Mallory’s body, still swaying in the wind. “Is it too late to go with that?”

Finally, it clicked. “Oh my god. This is about the countries? Are you selling weapons to them?”

“Honey, it’s none of your business.” He lowered the gun. “Let me tell you what’s going to happen next. I’m not going to shoot you, Cassie. And you’re not going to tell anyone about this.”

“Of course not. If I go down, you’ll lose everything: my money, our fancy friends, your handful of followers – and isn’t that what you care about most? Your Influencer career. You’d be publicly flogged. They would cancel you.”

He was probably right. It had happened to half her friends this year. It could happen to her. She’d be erased: shouted off the internet, forgotten.

Cassie hesitated, lip trembling. Vaughn smiled at her, a winning, confident grin that used to make her feel safe. She knew now that feeling was a lie, just like every post on her social media was a lie. The business dinners she pretended were a “date night with the hubby!” The glowing “post-workout” snaps she posted after piling on makeup for two hours. The “perfect present from a perfect husband,” a picture of a diamond necklace she bought for herself when Vaughn forgot her birthday.

He was holding his hand out to her now, and she took it, her other hand on her phone, as she quickly pressed post on the video she had taken moments before.

“That’s my girl,” Vaughn said, and they started walking up the hill as Cassie felt her phone buzz over and over and over again with incoming notifications. It was time for a rebrand anyway, she thought, smiling back at her husband, as his crimes went viral.

If you’ve enjoyed The Influencer, you can visit our free digital archive of flash fiction here. Additionally, premium short fiction published by Mystery Tribune on a quarterly basis is available digitally here.