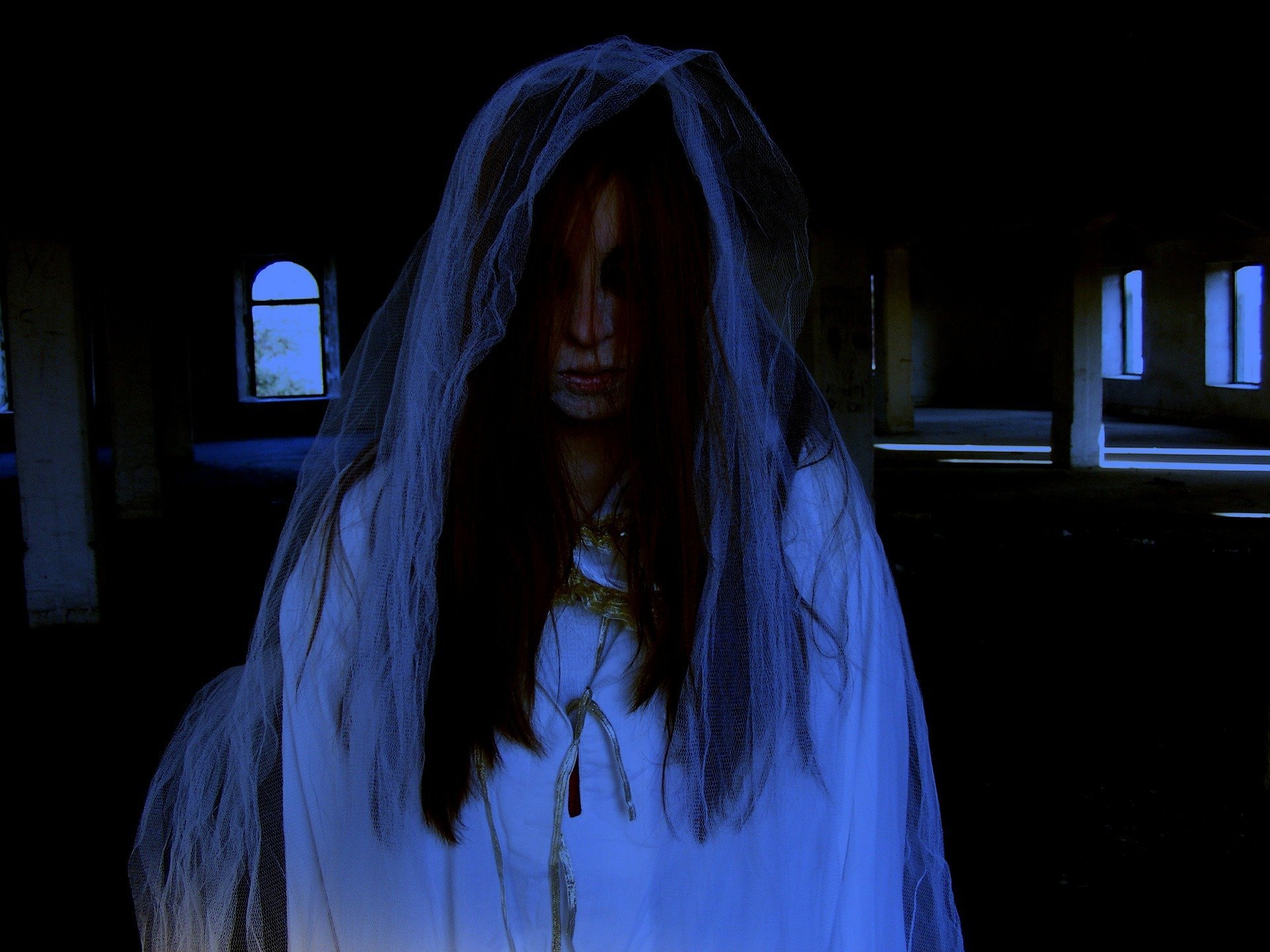 The Ghost Woman Of Rock Creek and other micro-flash pieces by Isabel Seabeck featured here offer a poetic reconstruction of three dramatic or dark scenes which have been utilized in many classic horror stories.

The Ghost Woman of Rock Creek

A string of mules climbed down the hill, downcast eyes fixated on the trail, long ears directed foreword, stationary and disengaged.  They struggled under the unbalanced weight of severed heads topped with long many-pointed antlers. The ragged stumps of the elk’s severed necks dripped clear stuff onto the backs of the mules.  The line marched onward; dust from the shod hooves floated into the air and was caught in the moist flesh of the severed cranial stumps.

Ursula stood beside the trail. The string passed by her and the dust caught, thick, in her nostrils. She smelled the blood as the loose skin flapped and dribbled wetness into the dust. The wide black tabs of noses buzzed with flies, and their blank clouding eyes seemed to watch her. Penetrating, blaming, persisting, the mule train marched past.  Ursula choked. Heat rose into her face, pricked her eyes, blinded her.

For many autumns Ursula stood beside the trail and watched the parade of mutilated elk on horseback pass her by. Hundreds of them, each the property of a sour faced man or woman who will hang it on their wall in a public demonstration of man’s dominion over beast.

Now, she crept between the trees watching the trail below. Loud voices wafted up to her. A horse whinnied. A man laughed. The path the hunters rode was a game rail, old and slow. Ursula cut through the trees above them, watching them, smelling them, silent.

The gap between Ursula and her quarry was closing too quickly, so she stopped to sniff a juniper tree. It smelled like autumn. Stalking was a give and take. Ursula kicked at the dirt and watched the dust spiral around her feet and then waft out in front of her.  She was upwind. The men had her scent. They could do with it what they wanted. She curled down beside the juniper and let them go, just a little. The voices faded and between gusts of wind she could just hear muffled phrases and the snort of a horse.

The ghost of Rock Creek was new, as far as legends went. The stories had been around for a year, maybe two, but they were powerful and disproportionately pervasive. Ursula waited.

The earth is yellow with brimstone.  Through dust-clotted nostrils, he can smell the warm stench of sulfur rising in clumps.  He flicks out his tongue and lets the tip curl around the place his lip used to be.  The splinter of moon casts the contour of each blade of grass in a curious rhythm of palpable light and dark, filling the air with viscous silver.  He turns his head to the side and spits a brown stream into the dust.  A bit of moisture clings to the stumps of facial hair caked below his mouth and reflects fragments of moonlight.  The desert air and bites into his cheekbones.  A pair of bobbing lights appear at the horizon.

Fuzzy dice swing rhythmically through her field of vision.  She rolls her thumb across the wheel, buckling and stretching the leopard printed fabric.  Her seat bobs up and down as she pitches along the rolling road, penetrating deeper into the night.  A photograph of a grandson in a blue cap and gown grins stupidly up from the place where a speedometer should be.  The darkness outside careens by.

The truck stops next to the mile marker.  Blue smoke plumes behind the trailer as it idles in place.  He’s never seen the driver.  It’s always just a truck that appears at the horizon and vanishes into the night, leaving him to do his work.  The trailer door releases with a clatter and he reaches in, finds the cargo, and drags it, letting it fall to the gravel.  Heavy.  Wrapped in loose burlap.  Stinking.  The truck pulls away into the darkness as he prepares his fetid burden for the prairie, the ravens, and the sun.

I was picking up trash on the side of the road because Judge Donaldson does not have a sense of humor and Miranda Mason is a whore.  Somebody in a van drove by and almost saw me wearing an orange vest dragging this bag, so I had to dive behind a giant sagebrush.  I cut my leg on something and now there’s blood running down my thigh, but at least its anonymous blood.  I brushed the dirt off the sharp thing, and it turns out it was a short flaking bone.  There are so many dead animals here.  I don’t know why the bones that cut me were wrapped in an old sack, though.