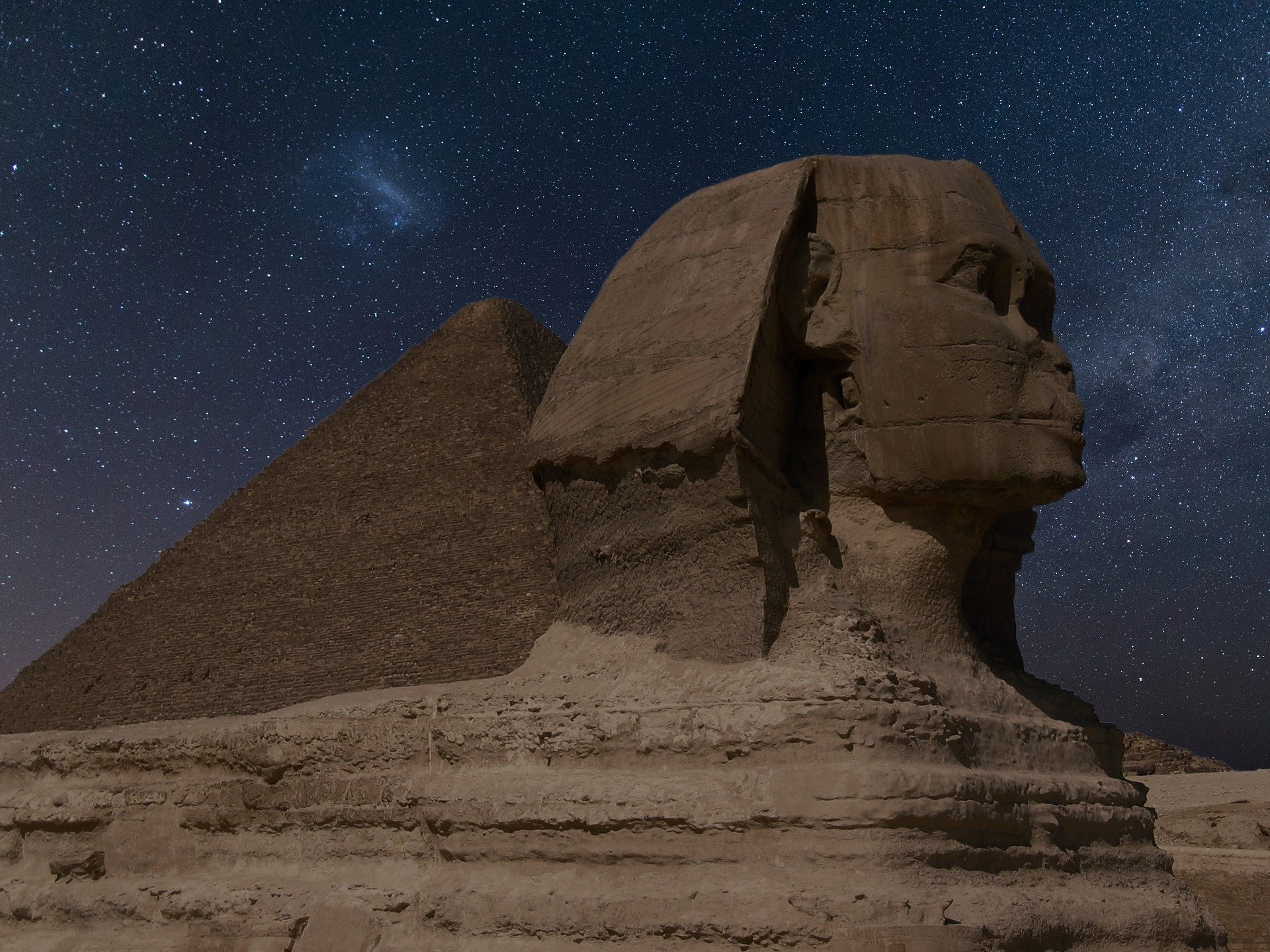 The Father Of Terror: A Thriller Flash Fiction By Aeryn Rudel

Aeryn Rudel is a writer from Seattle, Washington. He is the author of the Acts of War novels by Privateer Press, and his short fiction has appeared in The Arcanist, Factor Four Magazine, and Pseudopod, among others.

It starts with the dogs.

They show up a few days before a new hole appears, sleek black things with long narrow snouts and yellow eyes, skulking through the dark and howling at the moon. I think they sing to him, maybe to give him the strength to make a new hole. If I let them, they might even make him strong enough to come out of that hole. Then we’d be fucked.

Of course, convincing the world a bunch of stray dogs are trying to bring back an Egyptian god-demon is a one-way ticket to a padded cell, so my vigil is a lonely one. Each year around the same time–as summer gives way to autumn–I have a dream about where the next pit will be. I don’t know who sends these visions or whatever; maybe another god, a nicer one that doesn’t want to destroy the world and all us humans on it. The first dream named the thing that could end all things. It’s called Abu al-Hol. I found out later that name meant “Father of Terror.” They Egyptians even built a monument to it, maybe to keep it from eating them. It’s still there, thousands of years later. People call it the Sphinx now.

The dream came again three nights ago, and it showed me a place green and wet and cold. I used to get precise locations, like a Google Map in my head, but the last couple of times it’s only images. I got lucky; I recognized the place I was being shown, a park in a boring little town east of Seattle, Washington called Bellevue. So that’s where I’m at, in the middle of the night, hunting dogs that look suspiciously like jackals.

Bellevue has one thing going for it—it’s wealthy and quiet. That means no cops, which is good. The silenced .22 pistol I’m carrying under my rain poncho and the dead dog in a bag over my shoulder would be very difficult to explain.

The dream came again three nights ago, and it showed me a place green and wet and cold. I used to get precise locations, like a Google Map in my head…

Part of me hates shooting the dogs—I would never hurt an animal under any other circumstances. But these are different. These are his. I have to kill at least three for the ritual, to keep him quiet for another year. The dream told me how to do that, too: what words to say, to use a bronze knife instead of a steel one, that kind of thing. It’s some kind of magic, and my Christian upbringing says I’m dealing with the devil, but better the devil you know than the one who might come out of a hole and eat the whole fucking world.

There are a lot of parks in Bellevue, and in one of them Abu al-Hol will open his pit. I’m headed there now, working my way through dark streets in the rain, eyes on the lookout for more of his dogs. I shoot two more. The Ruger, loaded with subsonic ammo, makes no more than a soft clicking noise when I pull the trigger. That gives me three. It’s enough.

The park is small and secluded, sheltered from the street by lots of trees. There’s an empty baseball diamond, a sand box, and a basketball court. I know the pit is in the outfield grass. I can smell it—rotten meat and sulfur.

The new hole is about six feet across, and wisps of mist or steam rise up from it. It’s so black it looks like painted on the grass. It’s bigger this time.

There are three of his dogs around the pit, lithe silhouettes loosing high, wavering cries into the night. I pull the Ruger and snap off two shots. One hits. Two dogs race off into the night, and a dead one drops into the hole. That pisses him off. The ground shakes, and I can feel Abu al-Hol’s anger in my head like a swarm of bees. Near-paralyzing fear courses through me. No matter how many times I do this, shut him down, keep him from coming out of the ground, it scares the shit out of me. He isn’t called the “Father of Terror” for nothing.

I don’t look into the hole as I set my sack on the ground. The pit he opens connects to wherever he’s trapped under the ground, and you can see straight down into it. The one time I looked, I saw his eye—yellow like a rotten moon and the size of manhole cover—staring up at me. I didn’t sleep for a month.

There are three of his dogs around the pit, lithe silhouettes loosing high, wavering cries into the night.

I say the words to the ritual. They don’t sound like any language I’ve ever heard. I’ve tried sounding them out and writing them down, but even the internet couldn’t tell me what they mean.

When I’m done with the words, the ground shakes again, harder. I pick up the bag, open it, and dump the dogs on the ground. This is the worst part. I gut each one with the bronze knife, then toss them into the pit. These are his sacred animals, and throwing their defiled bodies back to him seals the deal. At least that’s what I believe.

The hole begins to shrink, collapsing in on itself, and the presence of Abu al-Hol fades from my mind. He leaves something awful behind, something that guts my relief at stopping him again. Just before the hole closes, Abu al-Hol’s rage subsides, and something far more terrible lurks behind it: a demon’s hope wrapped like serpents around two words.

If you’ve enjoyed The Father Of Terror by Aeryn Rudel, you can check our complete online collection, covering a wide range of flash fiction in crime, horror, mystery and thriller here. Additionally, premium short fiction published by Mystery Tribune on a quarterly basis is available digitally here.