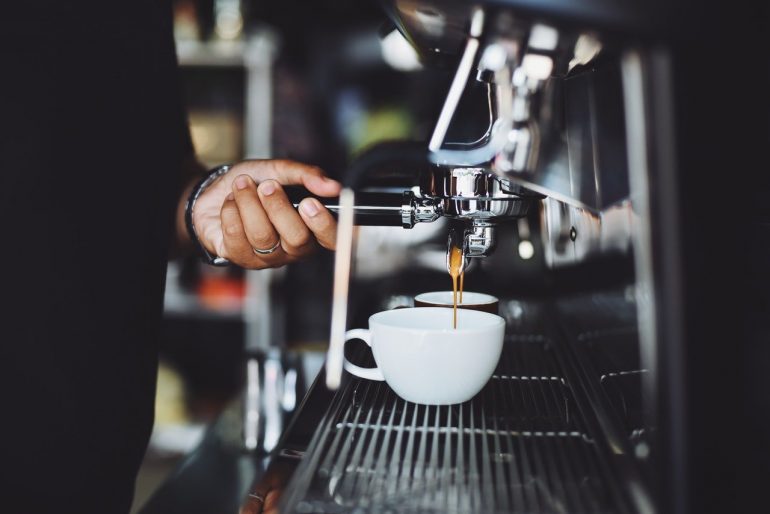 Julian Barrett, author of The Café des Infernaux, is a teacher and writer from New Zealand.  He currently resides in the Cevennes region of southern France, a landscape which has greatly informed this story.

Each day at 9:15 he came down the stone steps and into the square. On one side were plane trees and on the other was the Café des Infernaux, where he would stand at the bar and take coffee with steamed milk. Occasionally a single 35x45mm passport photo would be lying face down on the counter and there would be a single word—a surname—written in ballpoint pen on the back of it. When there was he would pick it up, slide it into the pocket of his coat and finish his coffee.

Martin was not difficult to find. He located his apartment on the Rue Guilhem where he lived his wife and young daughter, and watched it for as many days as it took to become acquainted with the man’s routine. In the evenings he went jogging, following a circuit that took him through the park and back to the Rue Guilhem by the Boulevard Gambetta. He exited the park through a little-used side entrance and took with him a small, well-groomed dog. It seemed a cruel turn of fate that a man would have to die in his shorts but that was the nature of the thing.

On the evening in question there was a crispness in the air and the sky was a rich navy blue. At the side entrance to the park he stepped before Martin and shot him twice in the chest using a pistol equipped with a silencer. He had read somewhere that the electrical impulse that initiates action occurs in the brain a full half second before we make the conscious decision to act. At times such as this he became acutely aware of the phenomenon.

He fired the second shot believing it to be the first. He supposed this might absolve him of something, but absolution was not something he had ever sought. Martin’s dog was of a type that had long since had any trace of nobility bred out of it. It barked once then trotted prissily away to urinate on the shrubbery.

To the south of the city lay a weird sprawl of caravan parks and boat clubs, tidal estuaries, salt flats; even the flamingoes that flocked there looked sun bleached. He parked the car and walked back along a causeway with a camera around his neck as if to photograph them. He did, and at the same tossed the pistol into the channel which was deep there even at low tide. There were other photographs on the camera that he had not deleted though he did not know why he persisted in taking such a risk. Some had been taken from the top of the Pont Diable, others from the calanques near Marseilles.

For several days he stood at the bar of the cafe, glanced at the blank countertop, finished his coffee and left. When next there was a photograph he looked at the name and slipped it into his pocket as usual.

He was even less difficult to find the second time around, though it was clear that in this instance different methods would have to be employed. He waited for him at the entrance to the park, his hand gripping the pistol in the pocket of his raincoat, and as Martin approached he stepped in front of him as he had before.

For several days he stood at the bar of the cafe, glanced at the blank countertop, finished his coffee and left.

There was not a mark on him—no wound or dressing beneath his sheer, slim-fitting T-shirt—and he carried himself with the healthy, self-satisfied posture of the public exerciser. Without taking the pistol from his pocket he shot the dog and a single scorched hole appeared in the lining of his coat.

In the car he put a large plastic cable tie around Martin’s wrists and left the pistol in the cup holder at his left shin. They drove north and turned off the highway onto a road that took them through severely pruned grapevines then scrubby half desert under the vast, eternally breaking swell of Pic St. Loup.

“Must I suffer?” said Martin.

“Yes, some people must. It’s all laid out in the contract. Nothing personal, you understand.”

There was an old stone chapel amongst the brush. There was no glass in the windows and no door in the doorway; but it was secluded and he was not concerned about the noise which would be considerable. He tied another cable tie around Martin’s ankles then went back to the car and took a crowbar from the boot. He could have just used the crowbar but he understood too that this particular assignment required a certain measure of lateral thinking.

The stones of the church floor were smooth and time-worn like blocks of wax. He lifted one with the crowbar and hefted it to his shoulder. Then he crouched before Martin and used it to crush both his ankles. Martin cried out and tried to drag himself away. So he shattered his wrists, then his shins, elbows, knees and so on until he finally flattened Martin’s skull.

At the Café des Infernaux he sipped his coffee and slipped a photograph into his pocket. There was no name written on the back of it but he recognized the man. No hint of recognition was evident in his face, nothing was. He finished his coffee and nodded a good day to the proprietor. Then he went back to his car where he had left it in a parking building on the edge of the city. He wedged the photograph in the dash so he could study it as he drove.

On the way he stopped at a supermarket and bought a piece of Roquefort and a bottle of wine. He considered buying an expensive bottle but settled on he knew he liked. Today it was not worth the risk. The girl at the checkout was the most beautiful girl he had ever seen. “Would you like your receipt?” she said.

At the Café des Infernaux he sipped his coffee and slipped a photograph into his pocket.

It was a little cream-colored house that from the back porch looked out over a parched, craggy hill. A ginger cat with an endearing smile and a smudge of white on the side of its nose met him at the door. It followed him to the kitchen with its tail in the air, looping in and out between his legs. He opened the wine then he filled the cat’s bowl with dry food until it flowed over onto the tiled floor. He took a second bowl from the cupboard and did the same.

Then he took the wine, the cheese, a glass and a folding knife to the living room. He poured himself a glass of wine and ate the cheese straight from its paper wrapping on the tip of the knife. The cat came and settled on his lap and he rubbed the delicate bones under its jaw as if pulling a trigger. “You never lost your nobility, did you Pamplemousse?” he said, and the cat looked across the room with an expression of pure beatitude.

When he had had his fill of the cheese and finished most of the wine he put the cat down gently on the floor and went to his bedroom. The wardrobe was full of raincoats—all identical slate grey. He selected one and put it on, then he took a pistol from a case and put it in the pocket. He went out the back door of the house, leaving it ajar. The cat sat on the back step watching as he pulled the lapels of the coat about his ears and cinched the belt. The lawn was bounded by a laurel hedge.

He walked across the lawn and lay down in the fragrant leaf matter beneath it. It was soft on his cheek and there were enigmatic, circular craters where birds had bathed and pecked there for insects.  He put the barrel of the pistol in his mouth and felt the cold steel on his tongue. His finger rested on the trigger and he made a small Hm sound of curiosity as he watched the knuckle turn white and pull it.