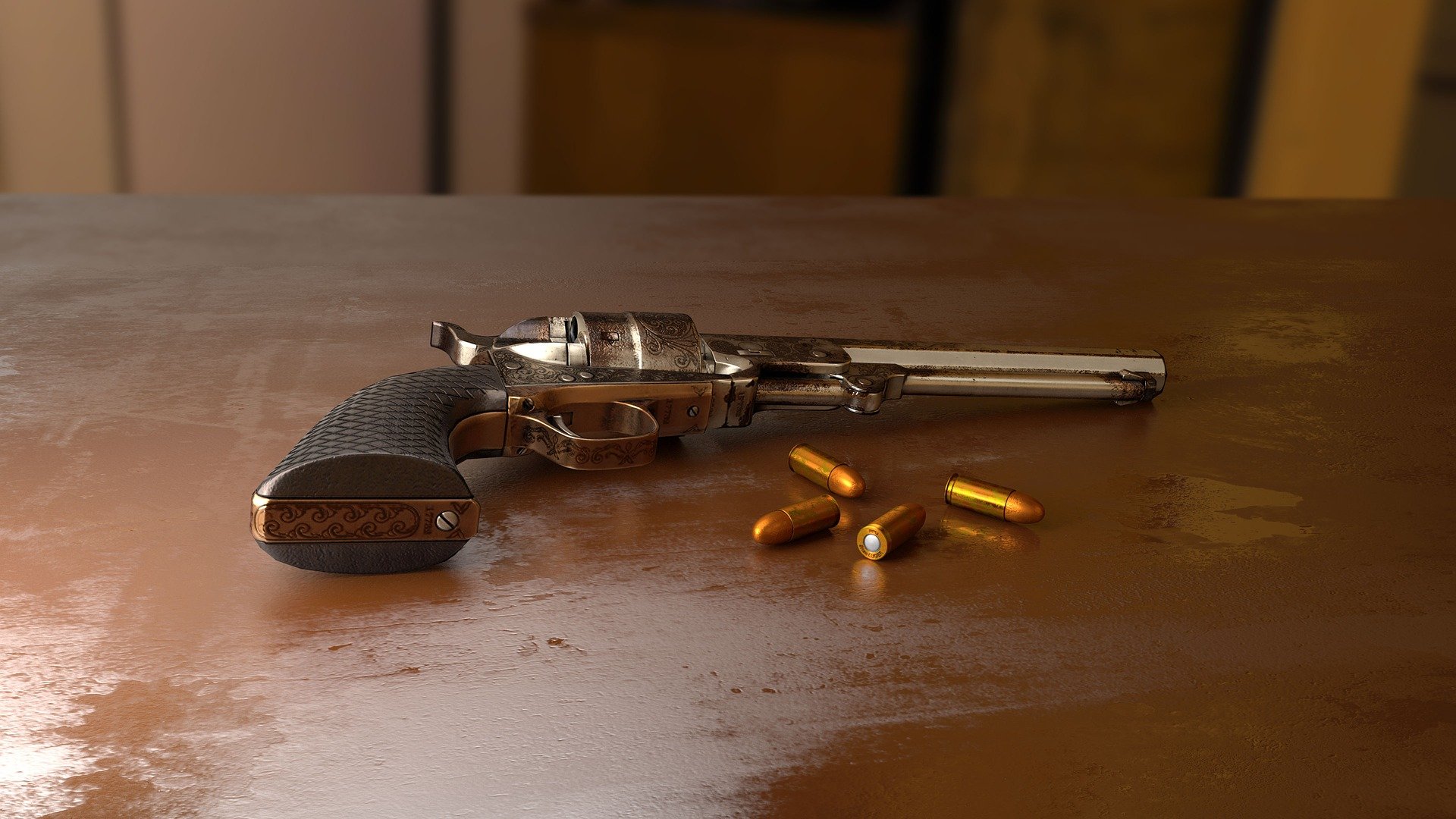 “The Art of Premeditation”: A True Crime Memoir Excerpt

“The Art of Premeditation” is a true crime memoir excerpt from “As You Were” by David Tromblay (Dzanc Books 2021) concerning author’s late father’s involvement in a premeditated murder (circa 1982).

David Tromblay served in the U.S. Armed Forces for over a decade before attending the Institute of American Indian Arts for his MFA in Creative Writing. His essays and short stories have appeared in Michigan Quarterly Review; RED INK: International Journal of Indigenous Literature, and Pank Magazine among others. He currently lives in Oklahoma with his dogs, Bentley and Hank.

Of all the images and smells and sounds that burrow their way into the limbic system, there’s not one memory of Mom and Dad as man and wife.

Maybe it’s because Grandma Audrey always says things like “You’re making that up,” or “That’s your imagination playing tricks on you,” or “That never happened,” atop her telling you that your mom is dead and gone whenever you ask her to confirm something you remember about your life back before you came to live at her house, back when you were little.

There is still one picture of their wedding day remaining. It’s not of them standing before a preacher bookended by the best man and maid of honor, but of Mom sitting on the Davenport in Grandma Audrey’s living room between Grandpa Bub and Grandpa Bullshit. Grandpa Bub squished himself up against the arm of the Davenport and stared off into the middle distance. There looks to be plenty of room for the three of them on the Davenport, but Grandpa Bub is trying to distance himself from the whole situation.

Mom is a petite little thing wearing a white wispy-looking dress with green trim. It’s a mix of hippie and disco fashion. It’s her second wedding, so it’s an off-white dress. She’s about six months pregnant—but you could not tell by the way the dress fit her frame. Dad is probably somewhere wearing a lime green leisure suit.

There are no surviving pictures of him taken on the day he married Mom.

Grandpa Bullshit is leaning as far forward as he can, trying to get out of frame. But his buzzcut and burning cigarette are in sharp focus.

The only picture of Mom and Dad while they’re married is one of them sitting on that same olive drab Davenport with you. You couldn’t be more than a couple of days old. Mom’s in a t-shirt and jeans. Her shirt says, “What You See is What You Get.” Dad’s dressed in a pair of black and blue and gray plaid golf pants. They’re probably bell bottoms. He’s wearing a short-sleeve shirt with a butterfly collar too.

The only picture of Mom and Dad while they’re married is one of them sitting on that same olive drab Davenport with you.

He didn’t bother buttoning his shirt, so he looks like the Disco Indian. He’s smiling. He’s not even looking at the camera. He’s got his arm around Mom, and it seems like he can’t keep his eyes off you, his son. Mom, though, she’s posed, sitting up straight, holding you up for whoever is taking the picture, smiling ear to ear.

Man, does she look pasty white when you put her next to him. Her whiteness—your whiteness—never dawns on you until it’s placed alongside his Indianness.

Dad’s been divorced for most of your life. Dating was sparse, too. There was one time during junior high when you crawled into his car and caught a whiff of something. You look around to find that something which looks a little too lacey for Dad to wear crumpled up in the back seat. Curiosity gets in the way of better judgment, and you pick up that something to discover it’s a pair of panties.

You drop them quick as you can. Dad says, “Hmm, where’d those come from?” with a laugh, and you say, “Where’d that come from?” and point to the half-smoked joint sitting in the ashtray. He doesn’t offer an answer. Instead, he lets out the clutch and drives off.

Before whoever forgot her panties, there was Connie. They dated for a few years. Connie stopped coming around right after your eighth birthday. Right after she bought you this massive folding case full of Crayola art supplies: water paints and crayons and cray-pas and colored pencils and markers. Sixty-four of each.

More than that, Connie made you feel like you had a mom.

There was one afternoon when Connie and her sister, Donna, along with Aunt Bobbie and Auntie Harriet and Grandma Audrey and Debbie—who’s a little shy of her thirteenth birthday—all sat around the dining room table, clucking away, talking bad about men.

You do your best to ignore them and their girl talk. At one point, you grow weary of being excluded from the conversation because you are a boy, so you say something about how you don’t want to be a man when you grow up, which makes them all laugh a little. And no one likes getting laughed at, so you sprawl out on the carpet with a bunch of construction paper and all those colors and create. But “If you’re going to eavesdrop, pay attention.” At least that’s what Grandma Audrey always says.

At one point, you grow weary of being excluded from the conversation because you are a boy, so you say something about how you don’t want to be a man when you grow up, which makes them all laugh a little.

Connie’s dating Dad, and Grandma’s got Grandpa Bub. Auntie Harriet has henpecked the hell out of Uncle Harold. Aunt Bobbie’s fine without a man for now, but Donna does have man problems.

Her husband, Steve, is a mailman. But he’s not the proverbial mailman with a bunch of kids living along his route who look suspiciously like him. Donna’s problem arises from the recent discovery of how her Steve has been inappropriate with her daughters since right after they got married. Her oldest won’t even talk anymore. She cries when you ask her what’s wrong. It was her youngest who told her what was happening.

Someone says something about cutting off his tallywacker.

Someone else shakes their head and says she has to kill the bastard.

Connie agrees and asks, “How?”

Shoot him, plain and simple, is the consensus of the table. Take a gun and shoot him.

Connie says something about ambushing him along his mail route while it’s still dark out and shooting him in the chest.

Grandma says there’s no way she could sneak up on a man who walks the same route every single day. It can’t be done. Men are already paranoid as can be. She could never walk up behind her Gene without him getting spooked. Even when he was relaxing in his favorite chair.

Then the table gets a bit more creative.

Then they get really specific.

Then Grandma says they got to stop talking about it. It’s gone from a bunch of hypotheticals to premeditation. She crushes out her cigarette and leans back in her chair, folds her arms. Connie says they have to get going anyway.

Donna found a guy at the Red Lion bar in downtown Duluth who’d do it for the whopping sum of five hundred dollars—let’s call him Todd. She knew the guy. She was a regular, as was he. As was Dad. Steve wasn’t. Todd didn’t know Donna’s husband, he only knew Steve was a child-molesting mailman. He really didn’t need to know much more, but, still, Donna embellished some, adding a little more to the story every time she brought it up to Todd. Though that does tend to happen when adult beverages are flowing.

Donna wrote down her husband’s work schedule and the license plate numbers for the vehicles he drove. Todd said he’d think about it.

After about two hours, Todd had heard enough and told Donna to drive him home where he’d change clothes. Then she could bring him up to the Bridgeman’s restaurant across the street from the bowling alley. And he’d handle it from there.

Todd waited for Steve in the parking lot by his vehicle and asked if he could hitch a ride. Steve agreed, since Todd’s place was along the way.

Todd shot Steve in the chest a total of five times, dumped his body, drove his jeep back to the bowling alley, called Donna from a payphone, and told her to come to get him. But he grew impatient and walked to her house instead. From there, the two of them went down to the Aerial Lift Bridge to talk about what happened before Todd took off for Texas.

The short version of what followed is Donna was convicted of first-degree murder for her involvement in her husband’s death. Todd did prison time, too, of course.

A week after the trial, Connie went and told Donna’s attorney it was her who set the whole thing up—not her sister. In fact, she never even let her sister know what she was up to. She said Donna was innocent. Oblivious.

The attorney taped the whole conversation, most of which contradicted her testimony at her sister’s trial. Throughout their conversation, she admitted to lying and how she talked her sister into lying too.

Come Connie’s trial, she pleaded the Fifth. Donna sang. She talked about how they rehearsed what to say so much that they had a running bet concerning the outcome of the trial. It turned out Connie did, in fact, talk to two other men about carrying out the murder as well. Though one died before her trial began, the other denied it outright from inside his cell.

Connie admitted she was guilty of perjury and conspiring to mislead the jury. The court concluded anyone aware of the things Steve did to Donna’s girls had every reason to fabricate a fictional version of what they knew about the murder—including Connie’s lover—which is how the court officially referred to Dad.

The only photograph he keeps in his wallet is of a 1965 powder blue Harley-Davidson Electra Glide he laid down one too many times after his father died after his drinking got really bad. The only stories he tells you about himself and Grandpa Gene take place in a bar. Maybe that’s why he goes there so often: to visit with him.