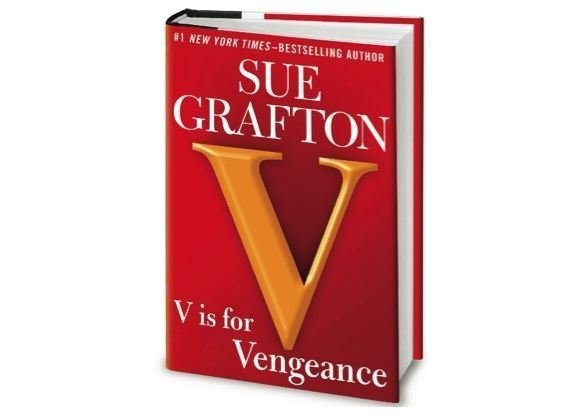 Sue Grafton Is Back With: “V” Is for Vengeance

V Is For Vengeance by Sue Grafton is #7 on NY Times list of best selling hardcover fictions and Grafton is now back with the twenty second novel in her “Alphabet” series of mystery novels.

Set in 1988,  the new book features Kinsey Millhone, a private eye based in Santa Teresa, California, a fictional version of Santa Barbara, California. Kinsey, the main character in the book is lonelier than ever: She spends her time by drowning herself in her books, watching TV, 3 miles running per day and drinking bad wine. But one day, while she is shopping, she witnesses a woman shoplifting with a confederate inside Nordstrom’s. She tells a nearby clerk, who alerts store security, and they capture and arrest the woman, named Audrey. This is the event which sets the main theme of the story in motion.

Right after her release from jail, Audrey apparently commits suicide. but Kinsey is not convinced and is determined to learn more. But she goes too far and soon she’s threatened, and is told to mind her own business.

To give a brief overview, books in Sue Grafton’s alphabet series, begun in 1982, and are international bestsellers with readership in the millions. And like Raymond Chandler and Ross Macdonald, Grafton has earned new respect for the mystery form. Readers appreciate her buoyant style, her eye for detail, her deft hand with character, her acute social observances, and her abundant storytelling prowess. She has been named a Grand Master by the Mystery Writers of America (2009) and is a recipient of the Ross Macdonald Literary Award (2004).

When it comes to the assessment for this book, the story is absorbing and the book is definitely is a page-turner, however we don’t consider it unique from literary perspective: If you are going on a ski trip and want to read something in the cabin buy this book; but if you’d like sophistication, you might want to look for other alternatives.