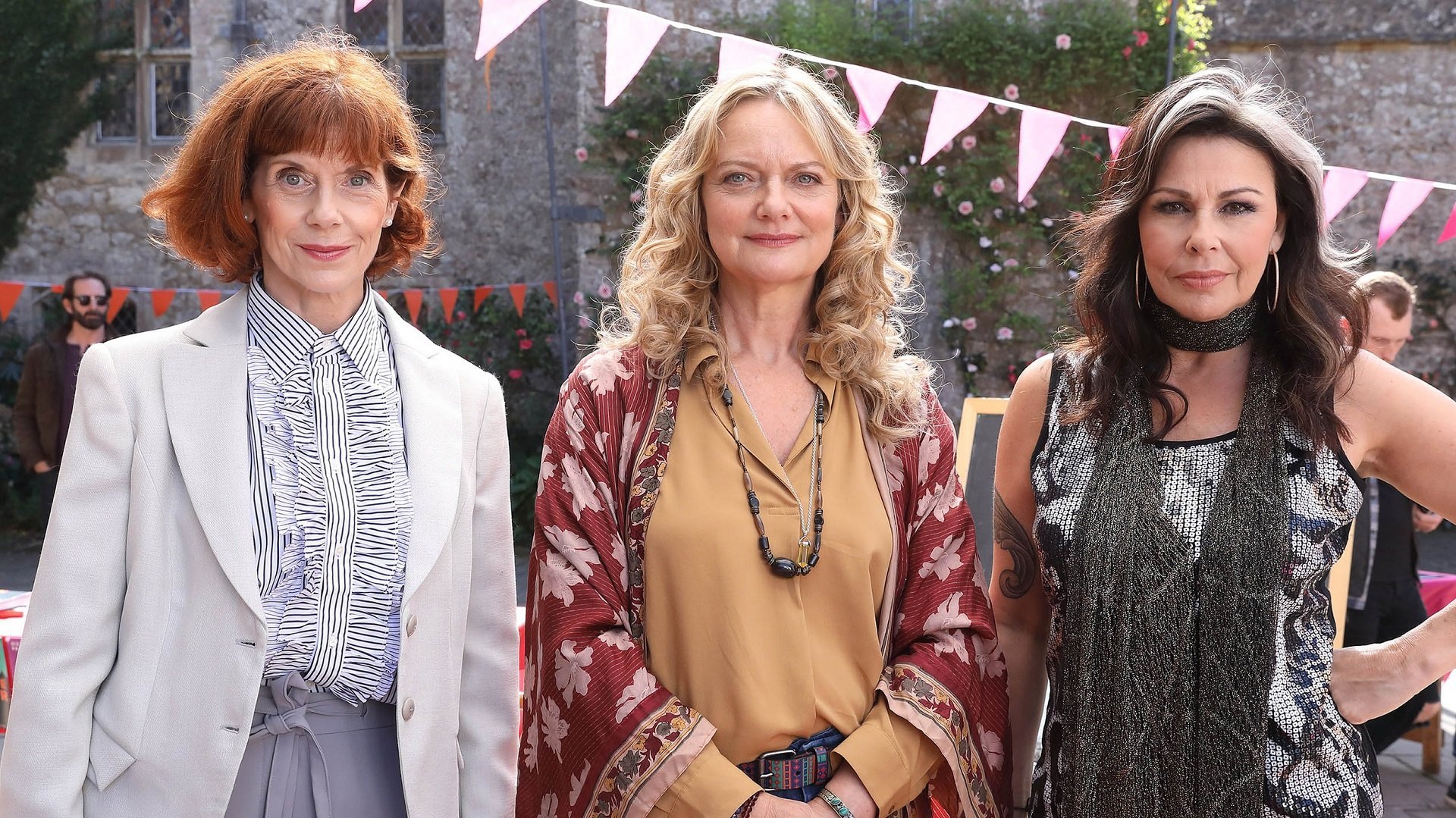 Queens of Mystery is a new British mystery series being shown on Acorn TV that was also just released on DVD.  Created by Julian Unthank, who has written for the medical comedy drama Doc Martin, it’s an original production from Acorn, the first season comprising three two-part mysteries of about 45 minutes an episode.

The time is now, and in true cozy fashion, the stories are set in a bucolic village called Wildemarsh (in reality, a village in Kent named Cranbrook).

The series sets its tone, a little dark, but also whimsical, fairy tale-like, right from the start.  A narrator, Juliet Stevenson, provides the background to the somewhat dreamy scenes we watch.

When she was three, cute, blonde-haired Matilda Stone lost her mother.  Her mother was raising her alone, and just like that, one day, her mother vanished.  Matilda never saw her mother again.  Still, Matilda had a comfortable childhood with lots of love in it, cared for by her mother’s three crime writing sisters.

We get a sense of what each aunt is like from a day when they each give her a gift.  Jane Stone advises her to study hard and hands her a big fat dictionary; Cat Stone tells her that if anyone “starts, make sure you land the first punch”, and gives her The Art of War by Sun Tzu; and Beth Stone gives her a container of homemade tuna pasta bake, Matilda’s favorite.

Each investigation involves penetrating a specific artistic milieu. The first case is called “Murder in the Dark”…

Matilda moves regularly among her three aunts, but she especially enjoys living above Jane’s crime bookshop, Murder Ink, where at night, for years, she sneaks down into the shop to read the volumes there, devouring crime fiction.  It’s no surprise then, with a childhood soaked in crime and mystery, that she would want to join the police.  At age eighteen, she does, leaving Wildemarsh behind.

However, as the narrator says, “the mystery of her mother’s disappearance never left her”, and Matilda has it in the back of her mind as the first episode begins.

Matilda has been assigned to work in her childhood village, and as she returns to Wildemarsh in her mother’s old car, she thinks about the clues at the heart of her mother’s disappearance: a haiku written in her mother’s hand on the blackboard in Matilda’s nursery, a Bulgarian cigarette found smoldering in her mother’s car’s ashtray, and the single black bird feather found in her mother’s safety deposit box.

These facts, perhaps connected, perhaps not, present a riddle that Matilda hopes one day to solve, but in the meantime she has her job to do, and it’s on the job that she gets the three cases that make up the Queens of Mystery episodes.

Each investigation involves penetrating a specific artistic milieu. The first case is called “Murder in the Dark”, wherein homicide breaks out at the Wildemarsh Crime Writer’s Festival.  This is a convention held at a local castle where fans and mystery writers mingle and where the prestigious Golden Pick Ax Award is given for best crime writer of the year.

In “Death by Vinyl”, a new wavish sounding girl band that toured and had stardom decades ago attempts to reunite to cut a new album, using the studio of a former rock icon who has become a recluse in Wildemarsh. Needless to say, the making of the record does not go as planned, with members of the band and the band’s manager being murdered.

Here the case strikes close to home because Aunt Cat, years back, actually belonged to the group before she left it due to a pregnancy.  Last we get “Smoke and Mirrors”, in which a play adaptation of Aunt Jane’s book, The Macbeth Quality, goes off the rails when someone starts killing the cast members.

Queens of Mystery blends mystery and light humor to good effect. The small-town setting and the omniscient narrator’s voice give the proceedings a timeless feel.

Of the three cases Matilda tackles, I liked “Murder in the Dark” best, though I’ll admit that could be because it concerned the jealousies and bickering and rivalries of writers, something I’m not unfamiliar with among acquaintances I have and which, I must say, the episode gets right, ridiculous as these squabbles can be.

But that’s not to diminish the music and theater episodes, which have an enjoyable tongue and cheek quality themselves.  Each case does follow an identical pattern, with a murder occurring a little less than halfway through the first episode and another taking place at the very end of that episode, setting up the story’s second part and conclusion.

…at the rate the series is going now, Queens of Mystery will be able to compete with Cabot Cove on the murder for capita scale.

In each case, Matilda and her professional colleagues investigate, and Matilda has to deal with the amateur probing of her crime-loving, inquisitive aunts.  She also has to tolerate their repeated attempts to arrange pleasant dates for her.  Though none of them has a partner of any kind, and each seems content living alone and doing her own creative endeavors, the aunts seem preoccupied with finding the right man for Matilda.

As with practically everything British, Queens of Mystery has a cast in perfect tune with the roles they play.  Olivia Vinall is Matilda, and Julie Graham, Sarah Woodward, and Siobhan Redmond are her aunts.  The performers who are suspects or victims in the individual episodes are fun.

Only Acorn TV knows for how many seasons it will continue this show, but at the rate the series is going now, Queens of Mystery will be able to compete with Cabot Cove on the murder for capita scale.

One thing is for sure: Matilda still has not gotten very far in learning anything about the whys and hows of her mother’s disappearance, and assuming that there will be a season two, I am sure we will be revisiting those clues we were presented with at season one’s outset: the haiku, the burning cigarette, and the solitary black feather. 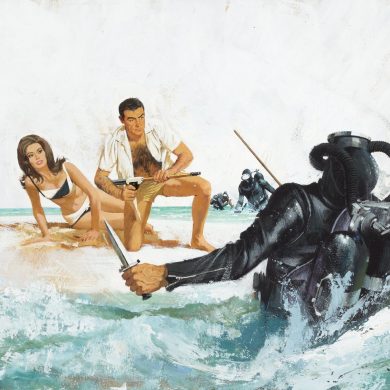