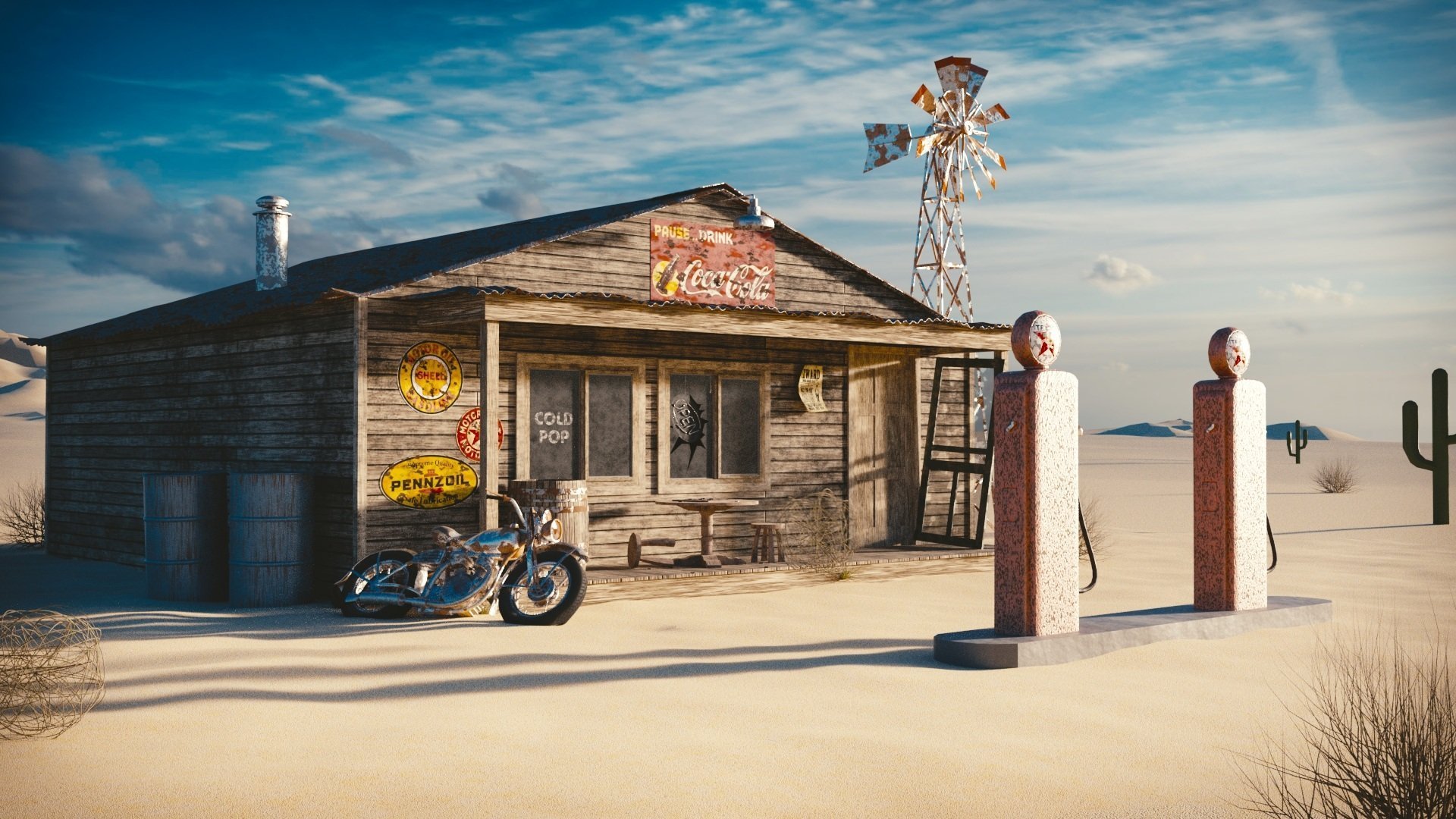 George E. Hillstorm, author of Piss Stop, is a mystery writer. He currently lives a lonesome life in Lockhart, Texas with his cat, Jerry.

Michael Diaz opened the rented Corolla’s glove compartment where he hoped to find his twenty Dollars bill. But all he found were empty packets of Marlboros and a speeding ticket. “Guess I’ll do it again” he chuckled to himself as he clambered out of the sedan.

It was now 12:50 A.M. Diaz had been traveling on a straight line for ten straight hours on a deserted interstate. Yet, he didn’t stop once for a “piss-stop”. He considered this a miracle. For the first time, he would deliver the artifacts without any delays. Diaz decided to celebrate the occasion by drinking a cold Budweiser in the gas station’s store.

But, not everything was perfect. At this moment his Glock and his “Benjis” were in his 250 square feet apartment on the other side of the country. No money and no guns represented death in this “industry”. But Michael Diaz didn’t care, he felt that nothing could stop him today. He would borrow what he desired from the market like D.B Cooper did in the “Northwest Flight”.

…not everything was perfect. At this moment his Glock and his “Benjis” were in his 250 square feet apartment on the other side of the country.

He approached the gas station’s store and stopped for a moment. Stroked his Nietzsche mustache and read the broken billboard with the classic American motto. “BUY ONE GET TWO”. Without a doubt, he was in the “land of the free” and the home of the bra-

The door made a pleasant sound as he pulled the cold metal handle and entered his “Disneyland”.

“Night,” said Diaz, scratching his head and putting his aviator glasses in his pocket.

He seemed to be alone at the store. Yet, he had the primitive feeling that he was being watched by judgmental eyes. Almost as if someone or something waited for the perfect opportunity to stab him in the back. He gave a maniacal smile at this thought but didn’t discard the possibility. The world was a crazy place even for a professional necrophilist like Michael Diaz.

Diaz turned his head to the back of the store. He looked delighted with the sight of the freezer: inside, the Bud’s shined bright like gold. They are waiting for me, I shall claim the lost treasure!

As he approached the freezer he felt the floor getting sticky. Almost as if someone had poured gallons of bleach on it. A standard procedure in the dark world. One that Diaz was fond of using before transferring the dismembered human parts to his car; where he would deliver his “package”. But the thought of a loose murderer died before it even started. Diaz was now hypnotized by the red and white cans across the freezer’s glass.

The feeling of ease took control of him as the nectar of the gods descended through his throat. When he felt the last foam of beer on his lips he crushed the can and threw on the ground like a vandal. Then, he held the freezer door open for a second time. When suddenly, his digital clock started to scream the passage of the HOUR.

“Better get going.” Said the man, producing a loud burp and then caressing his left hand at a “free”, but warm six-pack piled-up outside of the freezer.

The feeling of ease took control of him as the nectar of the gods descended through his throat.

The sound of shattering glass disturbed the market’s silence. Diaz had company.

Immediately, he searched his belt for a gun. But he didn’t feel the voluminous iron at his hip.

Act naturally you dumbass, disposing a fucking body here would be a pain in the ass, just like last time. Besides, the delivery won’t be made – oh! But that cry of pain, that feeling of power, it’s all so good, like daddy said little Mikey is never satisfied.

“Uh, Hello?” said Mikey Diaz. For the first time, he seemed content not to be holding a gun.  Like they say free hands always mean a nice strangle! Always. Always. Always.

Still, the only response given was silence.

With his back crouched and his every step gently placed Diaz marched through his second favorite shop section: the candy aisle. A site that reminded him of his salty childhood as an obese and rejected Latino-kid in the orphanage. But it also reminded him of his pleasant sexual life with underage high schoolers. The simple thought of the teenagers brought water to his mouth. They are so sweet, just like these candies! How I would like to eat one of the little devil’s now! Yes, yes, yes, NOW!

As he was entering the last aisle before the counter, Michael Diaz’s legs began to feel like two noodles. His sight was filled with black spots. His head felt as light as a balloon, and the only thought that circled his disturbed mind was not falling. But no thought saved him from hitting his knees hard on the concrete before collapsing with his head on the cold senseless floor. Diaz was still awake and began once more to “think properly” – whatever this meant for him. But his body seemed to paralyzed from head to toe. Soon, the man’s lungs started to close. Like his victims, he tried hard to grasp for air but nothing came in, only out, out, out. He cried with pain as the curtains of life seemed to close for him.

Michael Diaz flinched as the rays of light coming from a bulb penetrated his eyes. Diaz was still in the market. But now, he was in a comfortable room, seating in a wooden cushioned chair close to a fireplace. Wherever the killer looked he saw crucifixes of all sizes, and pictures of a smiling family of five. In front of him, there was a perfectly round red table with a healthy orchid in the middle. The table was placed almost as if dinner would soon be served, or as if his funeral would soon commence.

He heard a brief squeak coming from the door as an old woman entered the room. She had bushy paper-white eyebrows and wore golden oversized lenses. On her left hand, she held a cane. On her right, a food dish with no meal inside. But Diaz didn’t care for a plate of food, all that he wanted was to taste the little old lady’s wrinkled skin and ancient heart.

Her skin sure seems soft to cut, cut, cut. CUT!

She instantly changed her tone to a low and tranquil grandma voice. Then she proceeded, “Are you feelin betah son?”

“There’s nothin to worry about, we’re not the buggy ma-”, before she could complete the sentence she gave a burst of prolonged laughter. Diaz tried pretending a chuckle.

“Oh boy, where my manners at? – my name is Suzane Smith – but everybody calls me Suzzy, me and my husband – Jack – found you layin in our store’s floor. So, we’ve gathered we needed to help, so, we prepared yours and ours favourite dish.” The old timer gave a huge smile that seemed almost fabricated. Michael Diaz was becoming more and more impatient. He wanted blood and he would soon have it.

“Don’t leave me curious, what’s that?” He clenched his fists preparing to break the woman’s glasses and then strangle her.

“I have no idea, please tell me!” Diaz abandoned his chair and stood up. One more corpse for dinner, her blood will taste like old bourbon! Her vagina like cake! Chocolate cake, with cream and hot FUDGE!

The woman now spoke in a rough but high pitched voice, “Well, it tastes just like my daughta in the back of ya trunk.”

Before he could react Suzzy dropped her cane and with precision stabbed him in the stomach with a kitchen knife. Diaz felt the cold blade pass through him, reaching the other end of his body. His mouth was now consumed with the metallic taste of blood. Yet, the “victim” only bent forward, resisting.

He stood like a zombie for a second or two. Until he felt someone exhaling air behind his neck, it was Jack and he hadn’t brought “watah”. The old man tied a rope around the necrophile’s neck and took some distance to suffocate Diaz. Michael Diaz didn’t resist this time and fell on the wooden chair, defeated.

“We ain’t doin’ shit you dam psychopath! You are! You ARE! YOU ARE!” said Jack, now pointing a Winchester at the serial killer’s head. A simple pull of the trigger would bash Diaz’s brains, giving a new red decoration to the white plaster wall behind the two men.

“Let’s start his supper sweety.” Jack raised his head signaling at the kitchen knife which was still deep inside the victim’s stomach.

“Right, how could I forget?”

The old woman approached Diaz and removed the kitchen knife from his stomach. Exposing the man’s wound which started to drip, drip, drip blood all over his white shirt.

The old lady took hold of Diaz’s right hand. Then, she clenched his fists and placed the knife on there. Now, Suzzy was conducting his movements. Almost like an art teacher trying to help her students improve their paintings she guided him closer and closer to the canvas – his fingers.

“P…ppp.plea-” said Diaz, so weak he could not scream or terminate the sentence.

Your power brings us to birth,

Your providence guides our lives,”

“And by your command, we return to dust.”

Calmly pronouncing words to the Lord, Suzzane made the man saw each of his left fingers. Then, she forced the crying Diaz to chew them like gum. She proceeded to his right hand, by then, his appetite was satisfied.