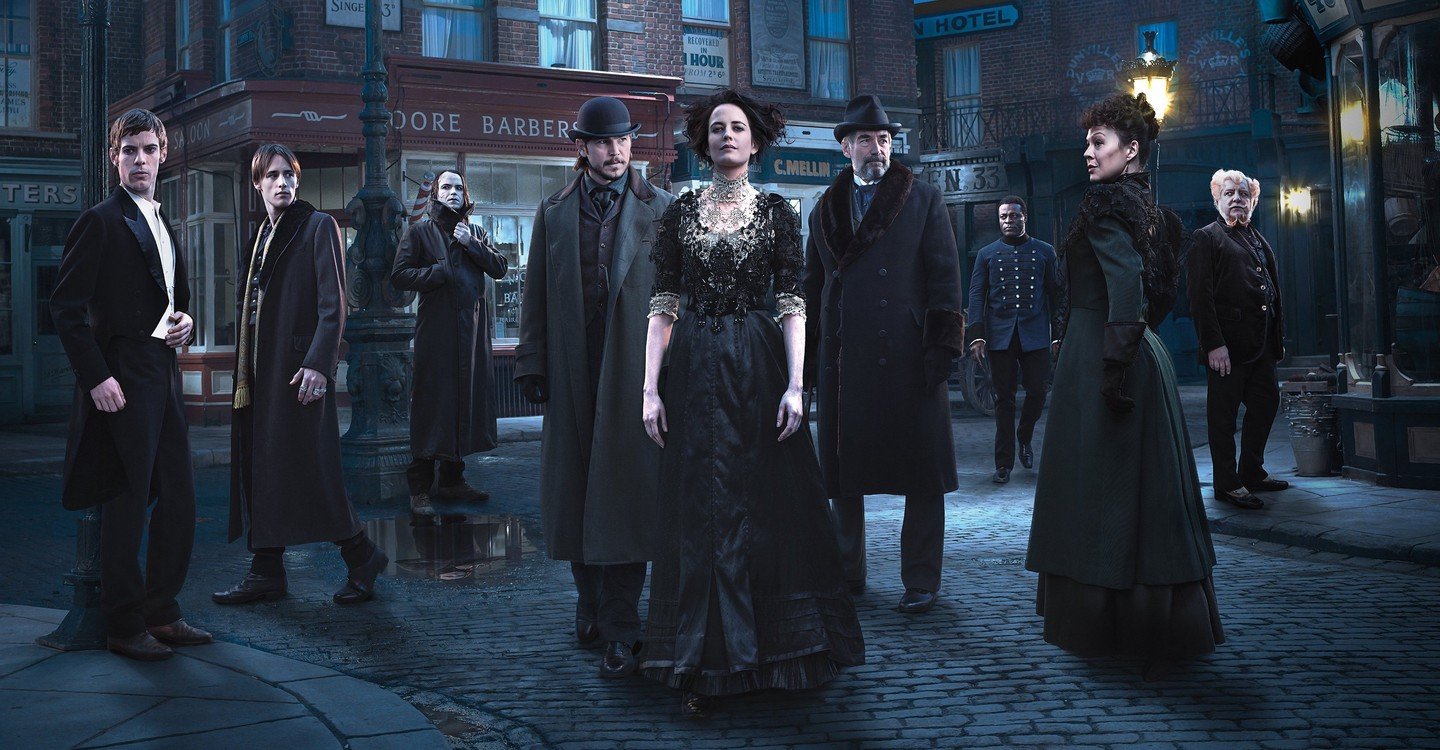 The penny dreadful was truly a revolution in the world of crime fiction in the 19th-century United Kingdom. The term typically referred to a story published in weekly parts, each costing one penny and the subject matter of these stories was typically sensational, focusing on the exploits of detectives, criminals, or supernatural entities.

First published in the 1830s as a result of increasing literacy and improving technology, penny dreadfuls featured characters such as Sweeney Todd, Dick Turpin and Varney the Vampire. The Guardian described penny dreadfuls as “Britain’s first taste of mass-produced popular culture for the young.”

In what follows, our aim is provide you with an in-depth guide on the history, subject matter, and legacy of penny dreadfuls.

With the rise of capitalism and industrialization in the early 19th Century, people began to spend more money on entertainment, contributing to the popularization of the novel. Improvements in printing resulted in newspapers such as Joseph Addison’s The Spectator and Richard Steele’s The Tatler, and England’s more fully recognizing the singular concept of reading as a form of leisure; it was, of itself, a new industry.

These changes created both a market for cheap popular literature, and the ability for it to be circulated on a large scale. The first penny serials were published in the 1830s to meet this demand. Between 1830 and 1850 there were up to 100 publishers of penny-fiction, in addition to many magazines which embraced the genre.

The serials were priced to be affordable to working-class readers, and were considerably cheaper than the serialized novels of authors such as Charles Dickens, which cost a shilling [twelve pennies] per part.

Issued weekly, each ‘number’, or episode, was eight (occasionally 16) pages, with a black-and-white illustration on the top half of the front page. Double columns of text filled the rest, breaking off at the bottom of the final page, even if it was the middle of a sentence.

When it comes to topics of these stories, penny dreadfuls were usually reprints, or sometimes rewrites, of the earliest Gothic thrillers such as The Castle of Otranto or The Monk, as well as new stories about famous criminals.

The first ever Penny Blood, published in 1836, was called Lives of the Most Notorious Highwaymen, Footpads, &c. The story continued over 60 issues, each eight pages of tightly-packed text with one half-page illustration. Some of the most famous of these penny part-stories were The String of Pearls: A Romance (introducing Sweeney Todd, “the Demon Barber of Fleet Street”), The Mysteries of London (inspired by the French serial The Mysteries of Paris), and Varney the Vampire (1845–47). 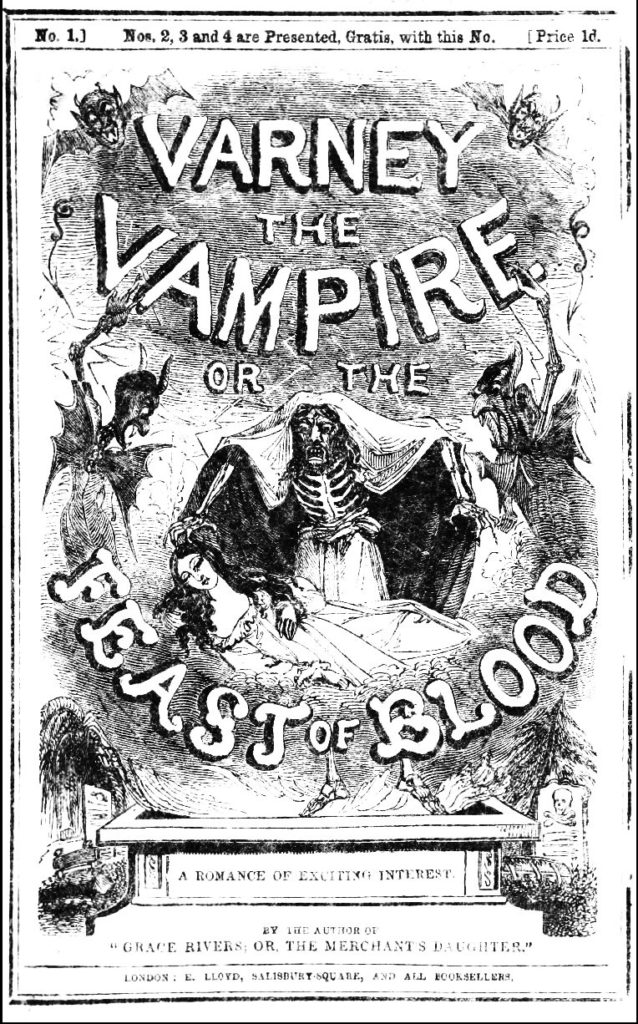 Varney is the tale of the vampire Sir Francis Varney, and introduced many of the tropes present in vampire fiction recognizable to modern audiences — it was the first story to refer to sharpened teeth for a vampire. Highwaymen were popular heroes; Black Bess or the Knight of the Road, outlining the largely imaginary exploits of real-life English highwayman Dick Turpin, continued for 254 episodes and was well over 2,000 pages long.

Turpin was not executed until page 2,207. Some lurid stories purported to be based on fact: Spring-Heeled Jack was what we would now call an urban myth. The first ‘sighting’ of him was in 1837, and he was described as having a terrifying and frightful appearance, with diabolical physiognomy, clawed hands and eyes that ‘resembled red balls of fire’. He was mainly sighted in London, but popped up elsewhere, and seems to have been a source of frightened fascination for several decades.

…the serial novels were overdramatic and sensational, but generally harmless.

At the height of Spring-Heeled Jack hysteria, several women reported being attacked by a clawed monster of a man breathing blue flames. The last ‘sighting’ was in Liverpool in 1904. Other serials were thinly-disguised plagiarisms of popular contemporary literature. The publisher Edward Lloyd, for instance, published a number of penny serials derived from the works of Charles Dickens entitled Oliver Twiss, Nickelas Nicklebery, and Martin Guzzlewit.

The illustration which featured at the start of each issue was an integral part of the Dreadfuls’ appeal, often acting as a teaser for future installments.

As one reader said, “You see’s an engraving of a man hung up, burning over a fire, and some [would] go mad if they couldn’t learn… all about him.” No wonder one publisher’s rallying cry to his illustrators was “more blood – much more blood!”

The penny dreadfuls were influential since they were, in the words of one commentator, “the most alluring and low-priced form of escapist reading available to ordinary youth, until the advent in the early 1890s of future newspaper magnate Alfred Harmsworth’s price-cutting ‘halfpenny dreadfuller'”.

In reality, the serial novels were overdramatic and sensational, but generally harmless. If anything, the penny dreadfuls, although obviously not the most enlightening or inspiring of literary selections, resulted in increasingly literate youth in the Industrial period. The wide circulation of this sensationalist literature, however, contributed to an ever-greater fear of crime in mid-Victorian Britain.

Many of these terror-packed stories were written by authors from England and U.S. and authors such as Edgar Allan Poe Poe, Robert Louis Stevenson, Stoker, Alcott and Conan Doyle played an important role in keeping the industry strong for decades. Among the notably prolific writers of the penny dreadful were also James Malcolm Rymer (pseudonym Malcolm J. Errym) and Thomas Peckett Prest.

Decline and Legacy of Penny Dreadfuls

Penny dreadfuls slowly fell out of favor starting in the 1890s with the rise of other forms of literature. Leading the challenge were popular periodicals published by Alfred Harmsworth. Priced at one half-penny, Harmsworth’s story papers were cheaper and, at least initially, were more respectable than the competition. Harmsworth claimed to be motivated by a wish to challenge the pernicious influence of penny dreadfuls.

The Half-penny Marvel was soon followed by a number of other Harmsworth half-penny periodicals, such as The Union Jack and Pluck. At first the stories were high-minded moral tales, reportedly based on true experiences, but it was not long before these papers started using the same kind of material as the publications they competed against. By the time of the First World War, papers such as Union Jack dominated the market in the UK.

However, penny dreadfuls left an important legacy behind: Two popular characters to come out of the penny dreadfuls were Jack Harkaway, introduced in the Boys of England in 1871, and Sexton Blake, who began in the Half-penny Marvel in 1893.

In 1904, the Union Jack became “Sexton Blake’s own paper”, and he appeared in every issue thereafter, up until the paper’s demise in 1933. In total, Blake appeared in roughly 4,000 adventures, right up into the 1970s. Harkaway was also popular in America and had many imitators.

The fictional Sweeney Todd, the subject of both a successful musical by Stephen Sondheim and a feature film by Tim Burton, also first appeared in an 1846/1847 penny dreadful titled The String of Pearls: A Romance by James Malcolm Rymer and Thomas Peckett Prest.

Over time, the penny dreadfuls evolved into the British comic magazines. Owing to their cheap production, their perceived lack of value, and such hazards as war-time paper drives, the penny dreadfuls, particularly the earliest ones, are fairly rare today.

Penny Dreadful is also the title of a TV series on Showtime: The show is a psychological thriller filled with dark mystery and suspense, where personal demons from the past can be stronger than vampires, evil spirits and immortal beasts.

Many people are familiar with classic literary characters like Dr. Frankenstein and Dorian Gray. “Penny Dreadful” brings those and other characters into a new light by exploring their origin stories in this psychological thriller that takes place in the dark corners of Victorian London.

Sir Malcolm is an explorer who has lost his daughter to the city’s creatures, and he will do whatever is needed to get her back and to right past wrongs. His accomplice, seductive clairvoyant Vanessa Ives, recruits charming American Ethan Chandler to help locate Sir Malcolm’s daughter and slay some monsters. Oscar-winner Sam Mendes (“American Beauty”) is one of the series’ executive producers.

Only three seasons of Penny Dreadful were produced and after the third-season finale on June 19, 2016, series creator John Logan announced that Penny Dreadful had ended as the main story had reached its conclusion.