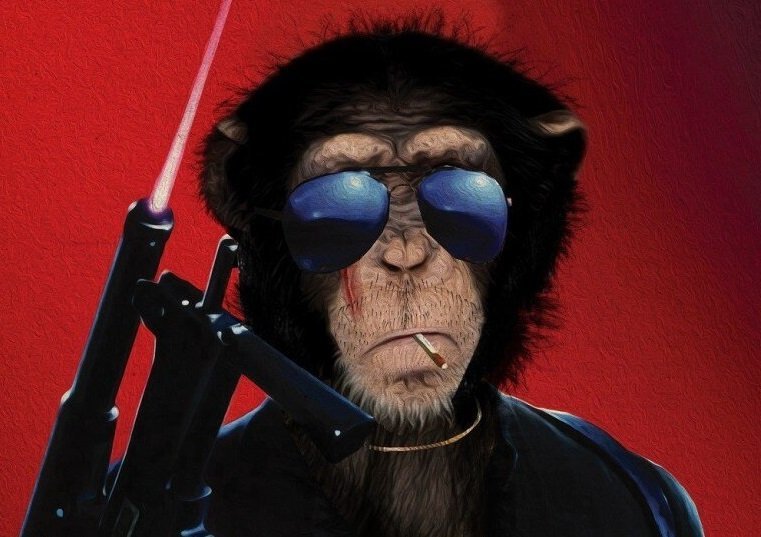 One Tough Bastard By Adam Howe Is A Super-Funny Thriller

Back in 2016, I did an interview with British author Adam Howe.  We talked about his then new book, a trio of novellas called Die Dog, or Eat the Hatchet.

That’s a book I would recommend to anyone who likes their horror mixed with satire blended with unabashedly lurid noir, but in any event, during the course of our conversation, Howe mentioned something about his childhood that gave a clue to his sensibilities.  He said that when he was eleven, the child of divorced parents, he moved back to England from Australia, where he had been living with his mother.

Under his father’s tutelage, Howe received a crash course in action movies, and, as he says, he “was fortunate to be around for the Golden Era of 80s action – what a time to be alive!  I particularly enjoyed Joel Silver’s oeuvre, and the early work of Steven Segal.  I pity the kids of today for lack of potbellied ponytailed heroes.”

At that time, going beyond this telling description of his formative years, Howe also brought up how his white whale of a novel remained elusive.  He described it as an offbeat crime/thriller and his ode to 80s action flicks.  I thought then that only someone, unlike myself, who had indeed been a child during the 1980s would have the idea, let alone want, to write an ode to that decade’s action movies.  But so be it; to each his own.

Under his father’s tutelage, Howe received a crash course in action movies…

Besides, not all the action stars during that period had tumescent stomachs.  The 80s are the decade in which Arnold Schwarzenneger unleashed destruction in various parts of the globe and that Sylvester Stallone, however he achieved his physique, was wracking up a high international body count as Rambo.  Propelled by his love for these films, Adam Howe persevered on his novel, while in the meantime turning out a couple of other books – Tijuana Donkey Showdown, a comic novel from 2016, and the funny and gory horror novel The Scapegoat, from 2018, co-written with James Newman.  Eventually, he finished his offbeat crime thriller, slew, as it were, his white whale, and he titled his new novel, befitting the sources that inspired it, One Tough Bastard.

Was the work Howe put in, and the wait for the book, worth it?

In a word, cutting to the chase – yes.

Set in the present day, One Tough Bastard gives us the over the hill action star, Shane Moxie.  The Mox, as he dubs himself, had a career that began with the film One Tough Hombre in 1988, peaked with the 1997 buddy action/comedy Copsicle, and flamed out with the fiasco KKK Cop, from 1998.  While once at least respectable in his looks and build, Moxie has degenerated into a bloated facsimile of his former self, and he has done himself no favors by sticking through the decades with the same mullet haircut he had in his self-styled glory days.

As a matter of fact, he did once have a chance at true stardom because Copsicle, directed by John Landis, was a big hit.  This was the film in which his buddy/cop partner in the story was the super-intelligent chimpanzee named Duke.  But while the director, cast and crew loved Duke, the Mox they viewed as arrogant and obliviously ridiculous in his sense of self-importance.  Which, if truth be told, he was.

The shoot got completed, but the result was that producers wanted no part of Moxie for the Copsicle sequel and killed his character off.  The Duke went on to do the film without a co-star and became the most respected and beloved animal actor of his generation.  By the time of the novel’s present, Moxie and Duke, once close, have not spoken for years, and Duke is an icon, though retired, and Moxie a public joke.

What neither suspects is that they will have to come together again.  They have to team up in real life as they once did as fictional cops on film.  It’s an unbalanced partnership (in terms of competence, Duke being extremely capable, Moxie not so much), but it is reformed when a criminal conspiracy rears up centered in Los Angeles and revolving around yet another 80s action star, the “lantern-jawed” and still “sculpted” former Olympian, Klaus Kaiser. 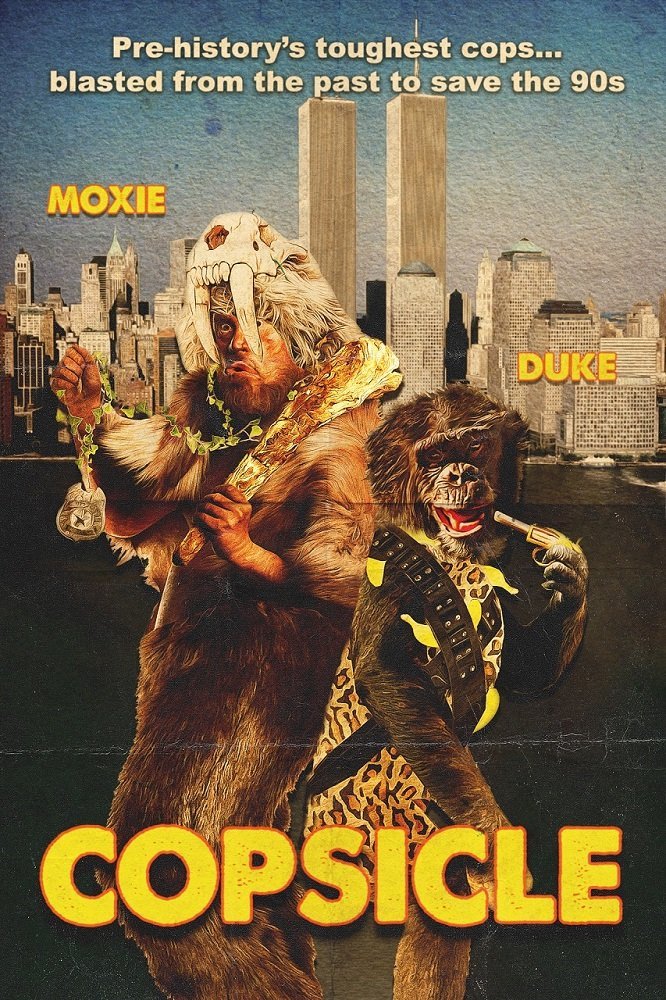 Since leaving movies, Kaiser has gotten involved in international drug dealing, and he runs his operations from the flagship location of his Hollyworld restaurant franchise.  When pressed, he even throws unwelcome people into the huge shark tank that dominates the center of the restaurant.  He is a formidable figure, just as he was in movies he starred in like Krone the Berserker and The Obliterator, and Moxie and Duke, once they understand that he is their adversary, have a lot of life-threatening danger to deal with.

One Tough Bastard, it should be clear, is a satire, and it is, without question, Adam Howe’s most ambitious book to date.  It’s longer than anything he has written, with his largest cast of characters and his most complicated plot.  Yet, unlike many of the era’s action films he pillories (with love, I might add), he has allowed no flab to remain on his story’s bones.

In the right hands, this book could be adapted into the ne plus ultra of 80s and 90s style action films, though it might actually take something like a Netflix limited series to do the entire book justice.

And would anyone adapting this have the same joyful and freewheeling sense of bad taste Howe has?  John Landis is described as “a safe pair of hands when it came to action/comedy, if not helicopters”; the chimp Duke has an implanted digital larynx that allows him to speak in a voice provided by Kevin Spacey, though Christopher Plummer is re-recording Duke’s lexicon to replace Spacey’s voice; and Shane Moxie, through the book, moves through life as if American culture has not changed one iota in thirty years.

But here, with Moxie, is where the reader can see with clarity and great appreciation the skill Howe has as a satirist.  Shane Moxie is obtuse and self-infatuated, but he’s not a malevolent person.  He doesn’t have an evil bone in his mushy body.  Though middle-aged, he’s a naif, a classic comedic character type dating back at least as far as Candide, and for that reason, the reader can’t get angry or offended by him no matter how much mayhem he causes or how insensitive he sometimes is.

…with Moxie, is where the reader can see with clarity and great appreciation the skill Howe has as a satirist.

Howe explains, for example, how Moxie had the best of intentions in making KKK Cop, a project he saw as his high-concept action flick with “an important social message on race relations in America”.  It’s a film in which, “To prevent a race war, tough black cop Jericho Payne (Moxie) is rendered white in The Melanin Machine, assigned the identity of crazed Klansman Bobby Lee Koontz (Moxie) and tasked the top-secret mission of infiltrating a neo-Nazi group armed with a nuclear dirty bomb.”

The script is filled with so much that is racially offensive, riots break out after its release and the Bloods and Crips forge “a short-lived truce to target theaters screening the movie for drive-by shootings”.  KKK Cop is withdrawn from theaters, the negative destroyed.  But ever afterward, Moxie can’t quite understand what went wrong.  He thinks, “Perhaps the wounds of racial injustice were still too raw; America wasn’t ready for Shane to lay on hands and heal her.”  It all sounds over the top, of course, but then you think that Moxie and the film are but exaggerated versions of countless Hollywood figures who embarrass themselves through their efforts to make films with a so-called social conscience.

Full-fledged, novel-length satire is rare these days in fiction, and I’m of the belief that nothing in fiction is harder to pull off well.  In One Tough Bastard, Adam Howe succeeds at this difficult enterprise, delivering a book that is highly entertaining.  From the dregs of a genre easy to laugh at, he has made a book you laugh with, hard, over and over.