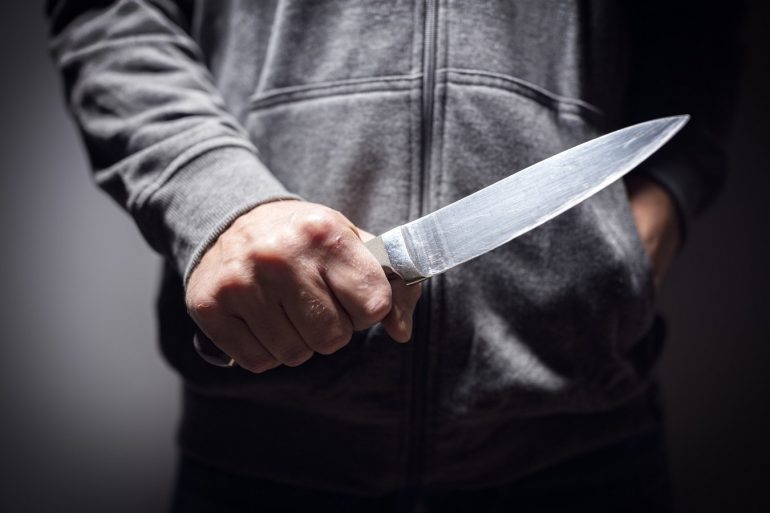 Stories by Chris Milam have appeared in Lost Balloon, Jellyfish Review, and elsewhere. He was nominated for Best Small Fictions 2018. He lives in Hamilton, Ohio.

Henry Elkins was the mayor of Casket City. He wasn’t elected to the position, he’s just really good at murder. A week ago, he was challenged by Shawn Moore, a lovely man who ate four families in two states before being apprehended at a KFC in Detroit. Henry impaled him with a rusted muffler pipe with his right hand while his left held a ham and pepper jack sandwich. If psychopathy was an aphrodisiac, you’d be in for an exhausting weekend with Henry at the local motel.

There were only a few residents left [in Casket City]. That was by design, really. Send them there instead of prison, where they’ll cost a fortune to house while waiting on worthless appeals. Let them jump the red tape, administer their own death sentence. The only requirement was you had to kill at least five people to get a one-way ticket to the opposite of paradise. Just enough bodies to get a hashtag on social media. Just enough to guarantee guilt. If you’re convicted of five or more murders, you probably did it. One? Maybe an eyewitness lied. Or the cops interrogated you for twenty straight hours and you finally broke, said fuck it. I strangled that priest.

You had two options if you wanted to survive in a lawless, sealed-off town populated with other deranged no-counts: hide or homicide. Jerry “15 Items or Less” Jenkins chose hide. He, as you probably read, murdered six grocery clerks throughout Tennessee. He would go through the express line, chill in his car, then follow them home. Before the decapitation, he’d ask if they wanted their head placed in a paper or plastic bag. And it all started because one day a guy in front of him unloaded 17 items on the conveyor. Jerry counted. Jerry was furious. He told the clerk, but she just looked through him while scanning the cheater’s items. Jerry hid because, at his core, he’s a coward. Most killers are when you rinse the blood away.

You had two options if you wanted to survive in a lawless, sealed-off town populated with other deranged no-counts: hide or homicide.

Pamela “Cuckoo Bird” Lancaster was convicted of butchering seven of her abusive ex-boyfriends, one every year on Valentine’s Day, by slicing them open and placing a cheap clock in their stomach. She’d crudely stitch them up and wait. She had to know if time really healed all wounds.

No, it doesn’t. Not theirs. Not hers.

She had an advantage in Casket City because men are men and she’s not. A fake hard laugh, a stare that drinks you, a well-timed shake, all tools to tenderize the prey. She’s up to nine murders here. She lacked clocks, needles, and thread, so she took them to the edge of goodnight but didn’t push. As her victims gasped on the ground, she hovered above them to see if it’s true that what doesn’t kill you makes you stronger. Nope. They cried and begged and got weaker and weaker.

Henry Elkins wasn’t scared of anybody, especially not yellow Jerry or even the vicious Pamela. His resume listed thirty-six murders. He was the human Old Sparky, but he was also tired of it all. He was sixty-two, ancient for an executioner constantly defending his crown. His reflexes and instincts were a hair off. Killing became a job instead of a hobby. Too much death and too many lonely years in a land that offered nothing beyond endless brutality. He thought he could reign for another year or two, but that’s a long time to be looking over your shoulder every second of the day waiting on a bullet to enter the back of your head. He was done. It was time to retire.

The Savage of Shreveport knew he could rip Cuckoo Bird in half, but he also thought she had leader written all over her. Ruthless and educated. Vengeful and soft-spoken. A giant heart in a tiny body. Eyes like violent maple syrup. She was ready to run Casket City. He’ll challenge her tomorrow, let her shove a blade in his throat. Or maybe she takes him apart without any help, she’s sneaky-tough like that. Either way, he only had one sunrise left.

But he had to do something about Jerry Jenkins before tomorrow, something not nice. Henry didn’t like cowards. Tonight, he will hunt down and have a chat with “15 Items or Less.” He just needed to find a couple of bags first.