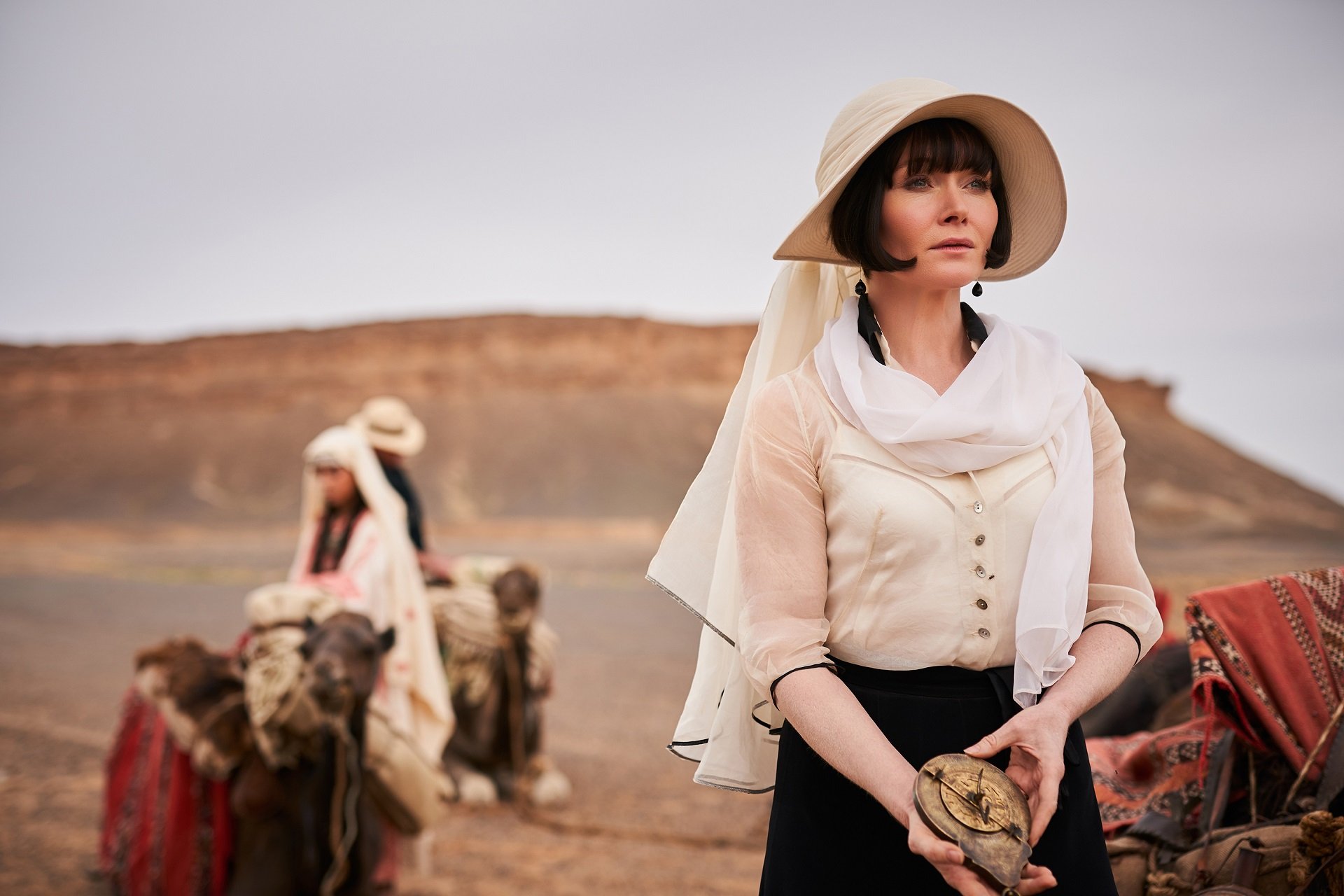 Miss Fisher And The Crypt of Tears: Return of An Elegant Melbourne-Based Detective

Miss Fisher and the Crypt of Tears marks the return of Essie Davis as the elegant and fearless Melbourne-based detective, Miss Phryne Fisher.

Adapted from the Kerry Greenwood novels set in Australia in the 1920s, the three seasons of the Miss Fisher Murder Mysteries series have been popular all over the world, but no new Miss Fisher adventure has appeared in about five years.

Now, though, vigorous as ever, she is back on the case, and this time she gets a full-length movie that takes her to England and to Jerusalem, a part of the British Mandate Palestine, in nineteen twenty-nine.

When last seen in the final episode of the series’ third season, Miss Fisher left her friend and romantic interest, Detective Jack Robinson, next to a runway as she took off in a biplane from Melbourne for parts not exactly known.  One presumes that wherever she is going, she will be not be lying low and lounging about on vacation; Miss Fisher cannot help but get herself involved in dangerous intrigues.

…vigorous as ever, she is back on the case, and this time she gets a full-length movie that takes her to England and to Jerusalem, a part of the British Mandate Palestine, in nineteen twenty-nine.

Sure enough, as the movie begins, we find her in peril.  It is broad daylight, Jerusalem is crowded with vendors and buyers and people going about their business, and there among all the activity, a group of Arab policemen are chasing and shooting at a female figure covered in a light blue jellibaya.  Athletic and fleet of foot, Miss Fisher scales a wall and runs over rooftops and, just when you think she may be cornered and shot, she flings off her outer garb to slip away in a sparking golden gown.

A short while later, though explicitly told to leave Palestine by a stuffy British administrator who makes a point of referring to her “grubby” Australian roots, we find her in an elegant red dress, hat, and heels as she uses a donkey to break a young woman free from a jail cell.  Their flight through Jerusalem leads to more of Miss Fisher’s physical derring-do, and the mixture of adventure and high-spirited absurdity brings to mind the Indiana Jones films as well as Romancing the Stone.

Miss Fisher has never been an armchair sort of sleuth, but here in full form we see her as an action heroine as much as she is a solver of puzzles.  It’s not until later in the film, when Miss Fisher is in England, that the murder mystery aspect of the plot kicks in, and the story will climax back in Palestine, in a tomb in the desert.

With an hour and forty-one minutes to tell their story and a budget larger than a TV episode budget to use, writer and co-producer Deb Cox, producer Fiona Eagger, and director Tony Tilse have successfully expanded Miss Fisher’s world into one that merits cinematic treatment.  Miss Fisher and the Crypt of Tears is stylish and well-paced and uses its external locations – part of it was shot on location in Morocco – quite well.

Miss Fisher has never been an armchair sort of sleuth, but here in full form we see her as an action heroine as much as she is a solver of puzzles.

In part, we can thank the fans for Miss Fisher’s return.  In a sign of how much they missed the series since it went off the air, fans responded big time when the show’s production company organized a kickstarter.  As Deb Cox and Fiona Eagger both said when I spoke to them in a phone interview, the amount the kickstarter raised gave them the courage to move forward with the project. In the end, they were able to get film financing that secured an $8 million dollar budget.

Phryne Fisher is an unneurotic detective, and that is part of her appeal.  How many detective characters we encounter now, in film and on television, solve cases despite their destructive habits or psychological scars, their pronounced mental disorders.  Tony Shaloub’s Monk, albeit in a comedy, has OCD and a number of phobias.  Anna Friel’s Marcella has blackout episodes.  Stellan Skarsgard’s John River has visions and talks to a recently murdered colleague.

The list goes on and on.  None of this is anything new – the unhappy and tortured detective dates back at least as far as Sherlock Holmes – but the type seems especially prevalent now.  That Miss Fisher is not like this and actually comes across as a happy person who enjoys her life is something her fans respond to, and they connect as well, in the words of Cox and Eagger, to the film and the series’ “celebratory air”.

A person who grew up poor but inherited wealth, Miss Fisher occupies an unusual social position.  She is neither working class nor a total dilettante, but instead that rare thing – a person comfortable with both rich and poor.  Kerry Greenwood created a character who shows mastery in whatever milieu she visits.  She has confidence and a positive attitude and the vibe she gives off that she can solve the world’s problems “means a lot to the fans,” says Cox.  In these often gloomy times, fans “have used her a godsend”.

Though set in the 1920s, with all the period trappings, the Miss Fisher episodes have always had a subtly contemporary feel, and Miss Fisher and the Crypt of Tears is no different.  Miss Fisher herself, certainly, is a modern age individual.  As she deals with danger in British Palestine, she does so while thumbing her nose at the British and flaunting a decidedly anti-imperialist mindset.  She’s a tolerant person and non-judgmental.

A person who grew up poor but inherited wealth, Miss Fisher occupies an unusual social position.  She is neither working class nor a total dilettante, but instead that rare thing…

We see, in this case, how she’s respectful of Muslims.  And her belief in the truth of the story told to her by Shirin, the young Arab woman she frees from jail at the movie’s start, has an unmistakable Me Too relevance.  It’s a woman believing another woman, Miss Fisher enabling Shirin to see the forces that have been oppressing her.  But as Cox and Eagger are quick to point out, they present all this without preaching: they are, as they state, entertainers.

And what about the somewhat frustrated Jack Robinson?  Nathan Page picks up playing the character right where he left off, in love with Miss Fisher, and who can blame him for being angry when in short order he is put through a whipsaw of emotions, first believing Miss Fisher has died, then finding out that she remains alive?

His reaction to the sudden revelation that Miss Fisher lives still is amusing, reminding one of how Doctor Watson responds when Sherlock Holmes, after his supposed death, reveals himself to his friend.  But Miss Fisher, like Holmes, is no easy person to keep up with.  She can be vain and self-centered, and though never cruel, heedless of others’ feelings, especially Jack’s.

Nathan Page has a tricky role playing the sidekick who is competent in his own right, and as he himself says, he is careful to make sure that Jack, whatever his feelings for Phryne, is a strong person.  Once the two wind up in a familiar place, investigating murder together, they are back in sync, their bond re-established.  But will the romantic tension between them ever be resolved?  Fans, Page says, want that, but it seems we may have to wait for the next Miss Fisher installment to find out. 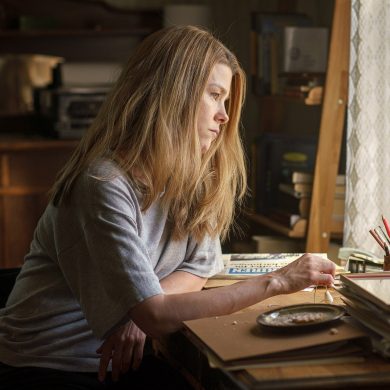 Scandi Noir Thriller “Rebecka Martinsson” Is Back For A Second Season