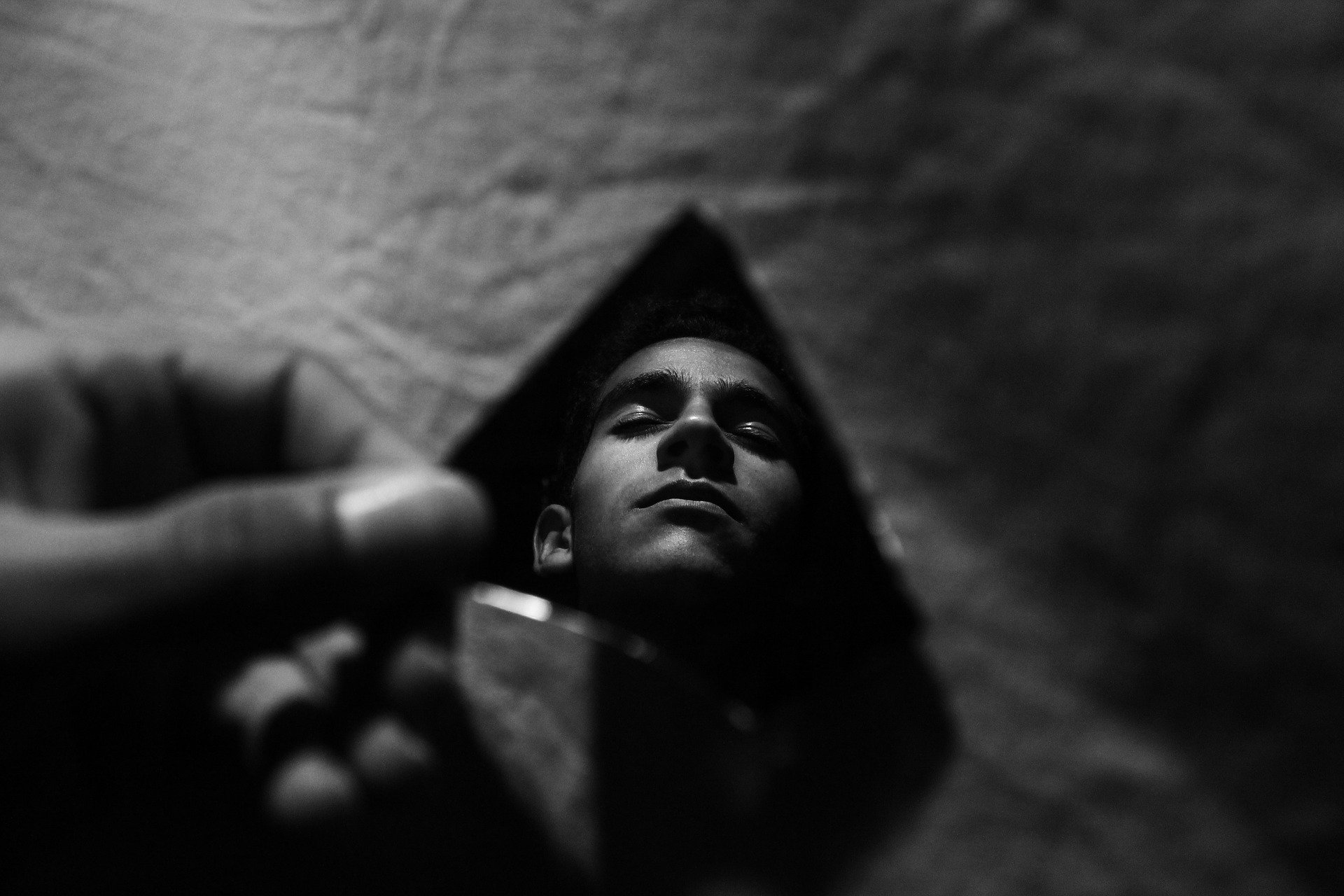 Joey ditched Alice to be with Peggy.  Alice wasn’t willing to do the things Joey wanted her to do like telling a phony alibi.  Peggy, on the other hand, was more than willing to help out Joey.  He liked Alice a lot more than Peggy, but he knew Alice would not get involved with all his bullshit.

Alice took his money from time to time, but she always told him she could not help him out when it came to the law.  She already had a rap sheet and was on probation.  She lived in New York all her life, and thought she knew it all, but there is always that one mess up.

Joey needed an alibi, and the cops were on him about a gas station robbery last Saturday.  One of the attendants got shot.  Of course, he and his crew were involved in it, but he wasn’t taking the fall for anyone.

“So, Peggy just get your story straight down at police station,” Joey told Peggy.

“Sure, Joey anything you say,” she replied, looking at him smiling.

Peggy showed up at police station with her story down pat.  Little did she know the cops were on to her.  When she walked into the station house, she saw two detectives waiting for her.  She wasn’t worried Joey told her what to expect.

“Hello, my name is Detective Warren and this is my partner Detective Smith,” he said with a straight face.

Peggy showed up at police station with her story down pat.  Little did she know the cops were on to her.

“Don’t mind if I do,” stated Peggy over confidently.

“Yeah, I have Joey’s whereabouts on Saturday night,” she said, not looking at the detective.

“It’s like this.  I was with Joey all night.  We stayed in, and I cooked him dinner.  He looked at some television and he fell asleep on my sofa. He woke up the next morning, ate breakfast, and left.  I don’t know anything more,” Peggy stated, just the way Joey and she rehearsed it.

“It’s like this. I was with Joey all night. We stayed in, and I cooked him dinner…”

“Do you remember what programs he looked at on t.v.?” asked Detective Smith

“Do you remember what you cooked for him?” Detective Smith asked.

“No, I think it was some leftovers,” she stated, looking at her nails.

“Peggy, we know you are covering for Joey, and we know for a fact that Joey was with Alice on Saturday night not you,” Detective Warren said, joining the conversation again.

“You’re mistaken, he was with me all night,” she hurriedly said, looking around nervously.

“We know Alice is his girl, and he is just using you for an alibi,” Detective Smith said, showing some sympathy.

“No, that is not true.  Joey loves me, and I am crazy about him.  I’m his only girl.  He told me so himself,” Peggy said, unsure of herself.

Detective Warren shows Peggy a picture of Alice and Joey kissing on a sofa in Joey’s apartment. He suspected this would change Peggy’s story, and he was right.

“Why that pig of a louse.  The good for nothing bum.  I thought I was his girl, and here he is two timing me,” Peggy said angrily.

“So where were you on Saturday night?” Detective Smith asks, with a sly grin.

“I was home alone,” Peggy said, looking around forlornly.

“You just saved yourself a lot of trouble.  Did you know the guy he shot died this morning?”  asked Detective Warren, looking sternly at Peggy.

“What are you talking about?  Nobody died,” Peggy said incredulously.

“Do you know where we can find Joey?” he asked.

Yeah, if he is not with his buddy Link then try Alice,” she laughed.

“Okay, let’s go pick him up,” said Detective Warren, looking over at his partner Smith.

Peggy walked out of the station house pissed off that she was being used by Joey,

Joey now on the lam, is combing the streets looking for anyone he knew that would help him, and that is a short list.  No one wanted to get involved in a murder.  He knew they would hit Alice and Link’s apartments looking for him.  He didn’t know where to go.  He spotted a diner ducked in, and ordered a cup of coffee.  The place was pretty empty, and Joey was getting nervous.

Joey now on the lam, is combing the streets looking for anyone he knew that would help him, and that is a short list.

He heard on the news about the guy dying this morning.  Joey shook his head from side to side realizing that guy was his only witness to the shooting.  He would have told them it was Link who shot him not Joey.  Now, it looks like Link along with Joey’s phony alibi is gone for good.

Joey now knows he is going to take the fall for Link.  Just then, Joey’s phone rings and it is Link telling him to come to a place they both knew without disclosing its exact location.  Joey jumped up and was out the door on his way.

Link walked quickly into the alleyway with his gun in his coat pocket.   He put his gloves on even though it wasn’t that cold.    Link was using Joey as the fall guy.  There was no way he was spending the rest of his life in prison.  He waited for Joey in the alleyway that was not too visible from the street.

He saw Joey coming and was going to move fast. Before Joey could say hi, Link put two bullets in his chest and watched him drop to the ground.  He walked over to make sure Joey was dead, and laid the gun on the ground next to him.  Link took off.

Hours later, police and detectives were in the alleyway putting up yellow police tape and taking pictures of the crime scene.

“Send the gun to ballistics.  We’ll get the bullets later after the autopsy.  said Detective Warren.

“Sure thing,” one of the officers said.

Link was boarding a bus to Phoenix, Arizona where he knew absolutely no one.  He had phony identification along with a disguise, and they were not looking for a blonde haired guy with a beard and mustache.

Back at police headquarters they found a match with the bullets.  They knew they had the killer’s gun.

“Well, what do you think?” asked Detective Smith, watching the expression on Detective Warren’s face.

“It looks like someone is desperately trying to cover their tracks,” said Detective Warren.

“They found a guy in the river with Link’s identification on him.  It looks like everyone got afraid and starting shooting each other.  So whoever shot Link and Joey is still out there,” Detective Smith said.

The detectives heading back to the station house to fill out their report.

Link was asleep on the bus without a care in the world.  No one was looking for him, except maybe Peggy whom he owned money.

Peggy was throwing some clothes in a suitcase when she heard a knock on the door.

“Who is it?” she yelled through the unopened door.

Peggy opened the door, and knew it was all over.  Somehow, they knew.

“Arizona is nice this time of year,” said Detective Warren. “Listen, it was all Link’s idea.  I didn’t know anything about a murder or robbery,” Peggy said, nearly crying.

“Who is the guy in the river with Link’s identification on him?” Detective smith asked.

“I only know him by his first name, Pete.  He was a new guy, and Link was suspicious of him.  It was Link who killed him.  The rest it I don’t know anything about,” Peggy said, scared out of her wits.

Link got off the bus a couple of days later in Phoenix with two FBI Agents waiting for him.

“Yes,” said Link knowing it was all over.

Back in New York Detective Warren was completing his final report when Detective Smith asked, “How did you know that the body was not Link’s?”

“Because Peggy called Link later that day and met him.  I put a tail on her.  She was playing Link’s game but lost.  They both lost,” said Detective Warren.

“Case closed,” they both said, heading out the door.