Interview with Samuel Bjørk, the Author of “I’m Traveling Alone”

, the US debut from International bestseller Samuel Bjørk just got out: A chilling and fast-paced thriller in which two detectives must hunt down a vengeful killer–and uncover the secret that ties each of them to the crime. Our review of this title will be out shortly but in the meantime, we hope you enjoy the following insightful conversation with this Scandinavian crime writer.

You are a novelist, playwright, visual artist, songwriter, singer and musician. Could you tell us a little bit more about your variety of engagements and about how you started writing stage plays and novels?

I grew up in a small town in the middle of Norway with not too much to do. When I was 15 someone started a theatre group for teenagers. I joined, and soon realized that I really loved working with the fictional world. I felt it was almost like a fairytale place where you could run off from reality, and be and do pretty much whatever you wanted. I wrote my first songs there, and my first all-night play there. One thing just led to another: I got a record contract, I got my first novel published, I wrote TV-series and plays for the national stage. I always tried to have fun, and just never stopped working.

I’m Travelling Alone is your debut thriller. It has caused a stir in Scandinavia, has been reviewed enthusiastically and the publication rights have been sold to 22 countries. What fascinated you about writing a thriller after having successfully published the two novels Pepsi Love and Speed for Breakfast in Norway?

What fascinated me most about the thriller-genre was the fast pace of it all. I have always been the kind of a person who never could sit still and I get bored very easily, so I wanted to try to write something where the excitement never ended, always kept going, one twist after the other. I wanted to write a project that ended up being something that you couldn’t put down or stop reading, and when finished with it you just wanted to read another one.

In I’m Travelling Alone, police investigate a series of murders. The victims are six-year-old children looking forward to their first day of school. You took a risk with a delicate subject, as writing about child murder is a balancing act: readers might easily be overwhelmed or disturbed. Do you share these concerns and if so, did they influence your writing in any way?

In all my projects I try to be as “true” as possible. That means I try not to work on projects that are too constructed, cruel, or written just to amuse people. When this story came to me, I was terrified in the beginning – I actually had to get up and turn on the lights in my apartment. I decided it needed to be written anyway, and then I of course tried to do it as gently as possible. Not one single act of violence is described in detail in this novel, and that was a choice I made very early on.

Pressure on the police is high to find the murderer as soon as possible. Two of the best investigators are appointed: Holger Munch, a corpulent inspector in his mid-fifties with the highest success rate among chief inspectors, and famous Mia Krüger whose instinct is infallible. Despite her ingenious investigative skills, Mia has quit police service and is now, in the beginning of her thirties, dealing with a personal crisis. Could you tell us something about these main characters and about their relationship?

It’s a bit funny because when I came up with the story – the plot – none of these characters existed. But I felt that the story was so gruesome and terrifying that I needed the best investigators ever, to be sure this murderer was caught. Mia came to me alone on an island, where she had hidden herself from society and decided to end her own life. She had lost her whole family, including her twin sister Sigrid to a heroin-overdose. Holger Munch is Mia’s opposite in a way, an intelligent but much calmer man, and the two of them have had a very close relationship in the past. Munch had recently lost his job, and the case brings them back together, which turns out to be a very good thing for the both of them.

Gabriel Mørk is an important member of Holger Munch´s team: He is a young computer nerd and hacker and has just started working in the homicide division. How does the story benefit from telling part of it from Mørk´s point of view?

I love this character, and telling some of the story from his point of view was very important. Gabriel in a way becomes you, the reader, because he has never been a police investigator, has never worked on any cases, and so looking through his eyes it is almost as though you enter the investigator’s world yourself. He asks all the questions and thinks how you might think, if you where put in the same position. I felt using Gabriel’s voice brought the story come closer to you, the reader, than it would have otherwise.

Could you tell us some details about your research, for example how you made yourself familiar with police work and psychological profiling?

When it comes to the police work I just tried to remember everything I had ever read, books from real cases, and crime novels, or what I had seen on films and in TV-series, and then work from there. Regarding the psychological profiling, I did no research at all. I just tried to be Mia Krüger and do and think as she would. It was pretty scary at times, but I think it worked out quite well.

I’m Travelling Alone impresses with well-conceived scene changes. Settings, rooms, objects and especially the places where the corpses are found are charged with symbolic meaning. Would you agree that your thriller is influenced by your work as a playwright in these aspects?

I think this novel is influenced by everything I’ve ever done – my plays, my novels, and also the lyrics I’ve written for my music. I’ve always tried to put an extra layer of meaning behind everything, trying to create images that would be colorful, symbolic and very visual, to give the reader the best experience possible every step of the way.

The closer Mia comes to solving the murders, the more she is confronted with her own past. Did you always plan for Mia´s own tragic history to be this essential to the whole plot?

To be honest, no. The plot and the story came first, and Mia’s character and story came later. But as I started writing, it became more and more clear to me that these two were interwoven in a way that I hadn’t planned at all. I knew who the murderer was but I actually had no idea that Mia was so involved as she turned out to be. At several points while writing the novel, I tried to write as fast as I could, I often stayed up for days, because I myself was very exited to know what was going to happen next. In the end, when the murderer confronts Mia with the real truth, I actually had no idea this was going to happen, or how all the pieces of the stories were so interconnected, before I wrote it.

You give an exact description of the psychological condition and inner development of your main characters. How important is the series of murders and solving them (or crime in general) for the characterization of your protagonists?

I have thought of this myself, and I think it’s a very difficult question to answer. The characters to me are so rich and interesting that one might think that writing about them without the crimes surrounding them would be possible, but then again, why not have it both ways? I think the combination of their psychological condition and inner life, and the crimes, is sort of the perfect way to get to know, and enjoy these characters.

Even the psychological condition of your minor characters is precisely characterized. Focusing on the lives of young children, you show what kind of experiences might cause emotional damage or mental disorders. Does your thriller convey some sort of social criticism in this aspect?

The answer to that is a definitive yes. Before I started to write this novel, which is my first genre-novel, I decided that I wouldn’t do it if I couldn’t also in some way portray my views on society in it.

Among the internationally acclaimed and successful contemporary crime novelists there are Scandinavians like Håkan Nesser and Jo Nesbø. Do you consider your thriller to be part of a literary tradition in this genre?

I think so, yes, this novel has a lot of the same dark-noir feeling that Scandinavian crime-writers are known for. When that is said, I wanted to give it something extra, try to do something new, maybe go psychologically deeper, and involve social criticism in a way that would maybe make it in part a literary novel, as well as a thriller.

I’m Travelling Alone is the first volume of a planned series about the investigator duo Holger Munch and Mia Krüger. Could you tell us a little about the second thriller and what you are currently working on?

I am currently writing the second thriller, deep in it at the moment actually, trying to get the characters to do what I want them to do, which is not always easy because they always seem to want to go their own way. Holger Munch is still trying to get over his ex-wife. Mia is out on suspension, needing a psychiatrist’s evaluation before she is allowed back to work. Then a seventeen year-old girl is found naked in the woods, laid out on a bed of feathers, surrounded by a pentagram of lights, with a white flower in her mouth. I think that is all I want to say about that, for now… 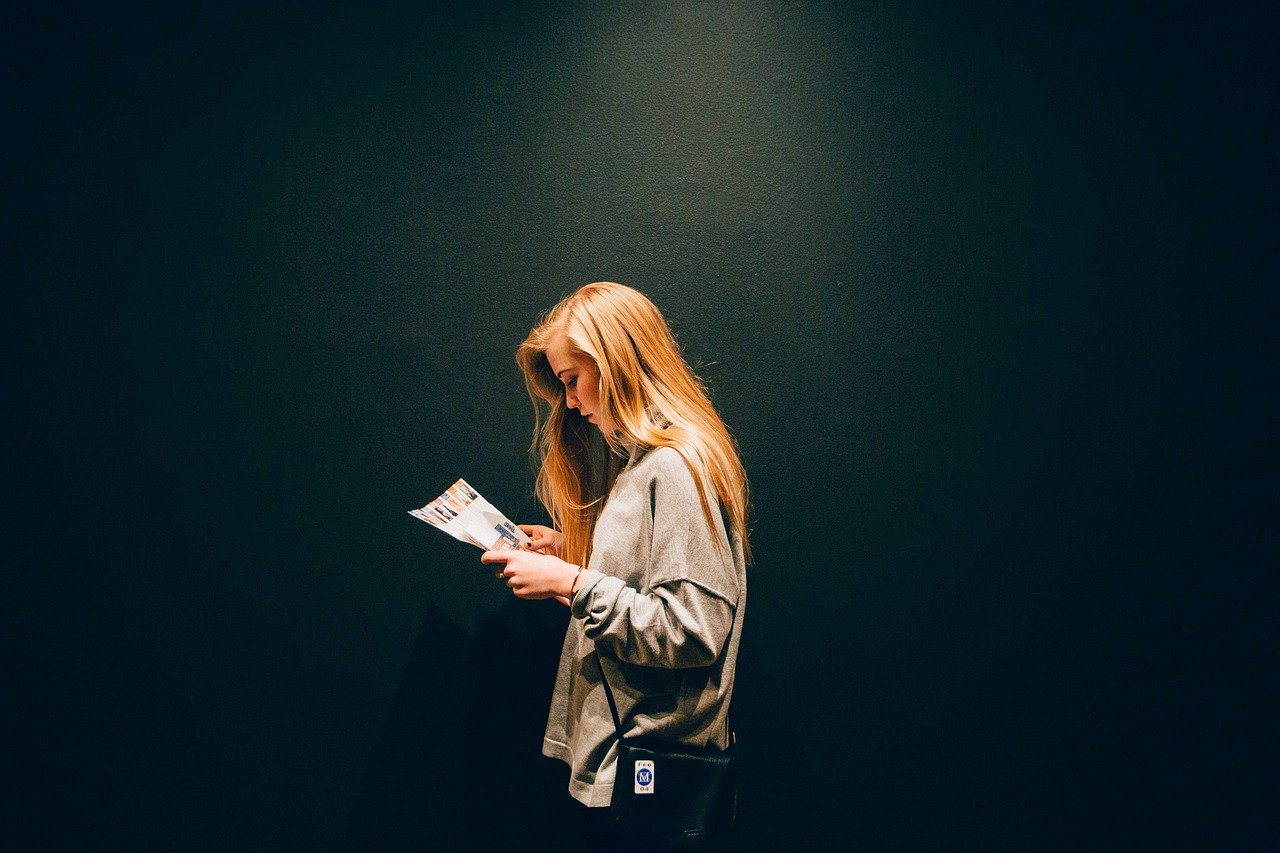