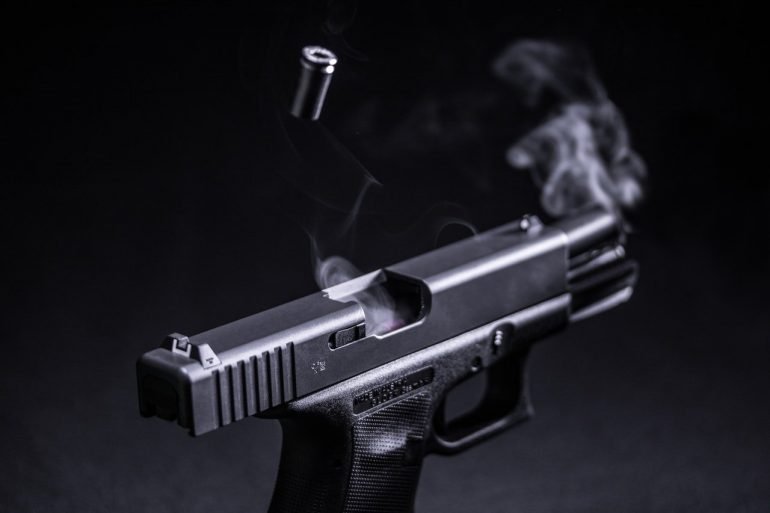 Instinct: A Flash Fiction About School Shooting By Philip Berry

In Instinct, a flash fiction piece by Philip Berry, the survivor of a school shooting recalls, vividly, the moment when he chose life. Short fiction by Philip Berry has appeared in Coffin Bell, Metaphorosis and Headstuff, among others. He lives in London, U.K.

The boys were bad, we all knew that. We had observed their black doodles, heard their grim poetry, peered through the hatched windows of their skewed creativity and seen two demonic minds orbiting one another. We might have guessed their intentions if only the violence of our imaginations had matched theirs.

I was in the last room. I saw how the fire melted Warren’s fingers to the desk and sealed pieces of Chris’s brain to the ceiling. In their tired, surrendered expressions I glimpsed regret.

They made their own Napalm, did you know that? I watched Warren release the first canister against the onrushing SWAT team. The fascination of acquisition, construction, comparison, had divorced them from its lethal potential. I do believe that. Their child-like minds did not know how to handle the visible consequences of the machines that we allowed them to collect.

But I am no better. Rather than hot metal or petroleum jelly, I used cold guile.

While Warren and Chris waited in the last room, I watched from behind the teacher’s desk. While they planned their final, futile moves I glanced at Anna’s polished shoes, which stuck out from behind her own hiding place like the slippered feet of the Wicked Witch of the East. They twitched for five minutes after Chris shot her in the chest. She whimpered and moaned for three, perhaps two… not four; I hope not four. She was the last. It should have been me.

That’s the way with school massacres. Some of it is personal, some of it is random. Anna was random, they hardly knew her. She had never gotten in their faces, never ridiculed their long black coats or Goth hair. She was earnest and kind. We studied together often. I used her for Math. Shamelessly used her mind, her time, her generosity.

The shots and the screams started from the other side of the campus and grew steadily closer. Then the sirens and the deeper, manly shouts of police officers and senior staff. Most of the teachers died for their pains, emboldened by authority which proved paper thin. Anna and I looked at each other with wide eyes, stayed quiet, and reckoned that we would be lucky. Why would a psycho kid – we hadn’t considered two – come in here? The classroom was empty. The school ran detentions in it, but it was not detention time. Nothing to see here.

Chris and Warren decided to regroup somewhere peaceful, count ammunition, hunker down for the final act. They paused outside the classroom and it dawned on us that they were going to come in. Anna looked around sharply, intelligently. She took charge. You go over there, I’ll go here. They won’t see us unless they come looking. It’s been quiet for minutes now, they’re done with killing. She seemed to understand evil. I nodded and crawled away. She slipped behind a standalone book cupboard.

The door opened. Warren was injured. An armed school guard had hit him in the thigh. He was crying, like the kid he was. His face said – I don’t wanna be here anymore.

Chris took a rucksack from Warren’s shoulder and muttered about burning the place down. They counted bullets. Loads left. Pocketfuls. The cotton of their trousers bulged like kids with too much candy. That’s when I began to feel sorry for them.

We were well hidden; there was no-one to shoot. They fell quiet. Someone sniffed.

Police had the building surrounded. An amplified voice informed the boys that there were snipers everywhere, they could not move, they could not escape. I didn’t think that was good strategy. Give them options man! I thought.

Chris, who like Warren had collapsed exhausted onto a chair, sprang up to find the source of the sniff. Wierd physics led him to believe that it came from my direction. I could see him swaggering, enlarging in the shiny metal rim of a small mirror that hung over a hand-sink. He held his gun high like a hero in a film. I was tempted to stand up and tell him, to bring it on… alter the shrinking odds, somehow. Did I consider it? Would I, really? Perhaps coax him to a window, put him in a sniper’s sights, watch him go down, watch him fold in the hot hail that would be unleashed.

I moved a little. My palm pressed on something sharp, a metal pencil sharpener. It made me wince, but I held the sound in. My fingers closed around it. Chris was approaching from the left. I slid to the right and skimmed the pencil sharpener across the floor towards Anna’s cupboard. It pinged against the side. Chris turned, then jumped towards her. She had seen it coming. She did what I had considered doing – stood up and gave him hell. She didn’t look in my direction, and I was glad of that. Our eyes were never to meet again. Chris shot her several times. He looked around, heard only the echoes, and seemed satisfied. Five minutes. Twitch, moan. Sick in my silent mouth.

Final warning from the men outside. Door twisting off its hinges. Wounded Warren said fuck it, throws napalm and ignites it and himself. Chris does the gun in the roof of the mouth pose and follows through against a fiery backdrop. I lie still and feel the heat. It licks and paws at me, but the men burst in and douse everything. They pick me up. A paramedic takes my pulse and places my hand on the edge of the gurney. My fingers are flexed, frozen in the throwing position.

The way it skipped across the floor like a pebble flung across a flat pond. The metallic ping. An uncertain memory, almost erased by denial, saved, made real again in these hard words. Forgive me Anna, they brought the evil out in me. As we allowed the evil to out in them.