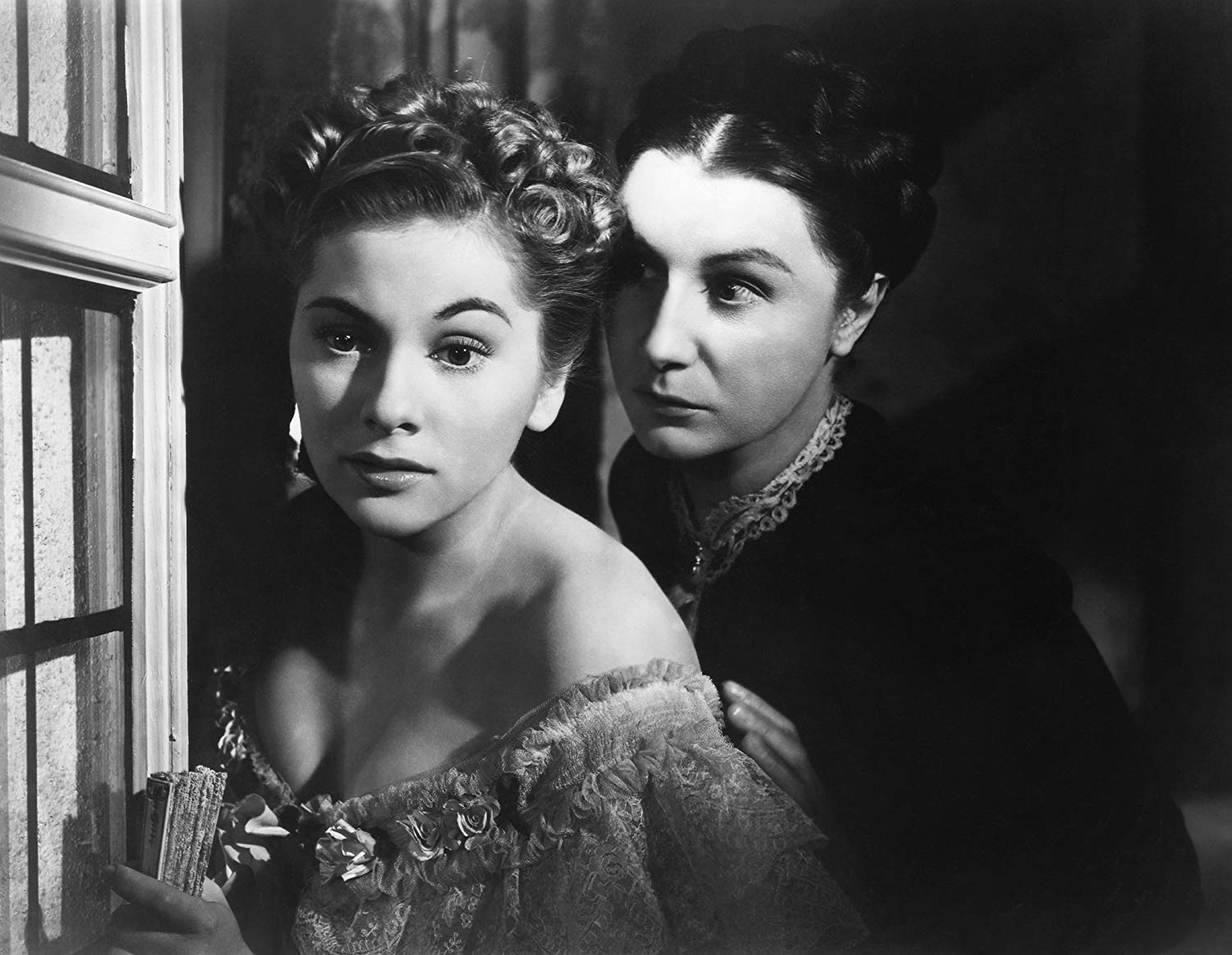 Kristen Lepionka takes a closer look at the queer coding in Alfred Hitchcock’s movies including Rope and Psycho.

October has a lot going for it. For one, it’s spooky season–time for all the ghostly decorations, haunted houses, and creepy movies. It’s also LGBTQ+ History Month.

These two things are not unrelated.

Listen: In art-house cinemas across the country this month, you’ll find horror-movie film festivals of all types. My local theater, the Gateway Film Center, calls theirs Hitchcocktober, perfect for lovers of noir and portmanteaus. I’m guilty on both counts.

But as any film buff knows, loving films from the 1940s and 50s as a queer person can be complicated–because depicting overt queerness was a strict violation of the Motion Picture Production Code that gripped Hollywood in a stranglehold beginning in 1934. So this month, let’s partake of a Hitchcock movie marathon while keeping an eye out for queer coding.

It all came about because Hollywood had an image problem. Scandals during the Roaring Twenties, such as the accusations of rape and murder against silent-film blockbuster comedian Fatty Arbuckle and the murder of bisexual film director William Desmond Taylor, attracted the attention of censors. Then movies started “talking”–all hell broke loose with the advent of recorded sound.

Leaders called for strict moral standards and a code of conduct for movie content based on the pearl-clutching premise that “no picture shall be produced which will lower the moral standards of those who see it.” The Motion Picture Production Code came to be known as the Hays Code, after the man in charge of the MPAA at the time–William Hays, former Postmaster General and devout Presbyterian.

The Production Code spelled out specific restrictions on language and behavior, particularly sex and crime–two of the most popular box-office themes. Among other things, it prohibited:

Depictions of these things could result in a film’s release being delayed or even prohibited.

It was all utter nonsense, of course. But anyway, early depictions of homosexuals were mostly child molesters, victims of violence, or drag queens. Queer characters were not allowed to appear “normalized” and were usually “punished” by the film–in the end, they were often disgraced or dead (or both!)

Hollywood is very different today, but queer representation still bears signs of the Hays Code, which was officially abandoned in the mid-sixties. While nudity and violence quickly made their way back into films, queer characters were–and are–so often presented as “other,” deviant, not entitled to a happy ending. (Just see the Bury Your Gays trope, which is well-documented–learn more here, here, and here).

But just because the Hays Code forbade overt mention of these things during the noir era doesn’t mean that writers and directors removed all mention–they just had to get creative. That’s how films from that era became filled with thinly-veiled innuendo and subtle (and sometimes not so subtle) clues. So in honor of Hitchcocktober and LGBTQ+ History Month, here are some such moments to look out for during your next noir marathon.

Basically this entire film is a queer-coded moment. Based on a 1929 stage play of the same name, the plot is a loosely-disguised retelling of the real-life Leopold and Loeb murder case. In essence, two aspiring philosophers murder a classmate and conceal his body in a trunk during a dinner party, as an intellectual exploration of “the perfect crime.”

The coding comes into play through the relationship between the two men, shaprly-dressed “roommates” Brandon and Philip. The film opens to a dark room in the immediate aftermath of the murder–the two men lower their victim into a wooden chest. Then, breathing heavily, Brandon reaches for the light switch. “Don’t,” Philip says, panting. “Let’s just stay like this for a minute.”

Then Brandon lights a cigarette. ”Pity we couldn’t have done it with the curtains open, in bright sunlight,” Brandon remarks a few minutes later “It,” of course, is the murder. But queerness is the other “it” of the film. Yes, these men are murderers–but the double-entendres, popping champagne corks, and undeniable sexual chemistry between the leads are what makes Rope so claustrophobic and fascinating.

Said leads–John Dall and Farley Granger–as well as the screenwriter, Arthur Laurents, were queer. The queer subtext was by no means accidental. While the depiction of gay men as psychopathic murders does us no favors now, there had to be something exhilarating at the time about “getting away” with more than a murder–with portraying a queer relationship in full view of the cameras.

Anthony Perkins was a real-life bisexual, and he’s terrifying as the eponymous psycho motel owner in this groundbreaking film. Like in many films of the time, the effeminate Norman Bates represents evil and “otherness.” Psycho is an exploration of abnormal psychology most of all, based in part on the Ed Gein case (inspo behind basically every serial killer movie ever) and leaning heavily into the Freudian concept of psycho-sexual development–Norman’s was stunted in the phallic stage through his inappropriate relationship with Mrs. Bates, leading him to “keep her alive” after her death by dressing in her clothes.

Norman, as Norman, is a soft-spoken, polite young man; Norman as “Mother” stabs Janet Leigh to death in a shower. Is the film equating Norman’s queer affect with abnormal psych? Maybe; it’s worth noting that homosexuality was considered a mental illness by the APA until 13 years after this film was made, and that gender dysphoria still is (in recent years, the term’s definition has been adjusted to apply specifically to people who are distressed about their cross-gender identification, not merely to all trans people). Also worth noting is that Norman Bates was the role of a lifetime for Anthony Perkins.

By 1960, the enforcement of the Hays Code was beginning to wane, but Psycho had to be recut more than once to get the stamp of approval. Interestingly, not because of Norman Bates, but because of the infamous shower scene (watch it again; you’ll see that it doesn’t really show anything at all) and, also, hilariously, the flushing of a toilet (which wound up making the cut, and becoming the first flushing toilet on film ever).

Daphne Du Maurier, the bi author of the novel of the same name, wrote Mrs. Danvers as more of a maternal figure (albeit still a creep). In the hands of Alfred Hitchcock, Mrs. Danvers becomes something else entirely. We never meet Rebecca de Winter in the book or the film; she’s dead, allegedly having drowned during a sailing accident.

At the start of the story, the gloomy widower Maxim de Winter takes a new bride–unnamed until she becomes the second Mrs. de Winter–and brings her home to the sprawling estate, Manderlay, which he shared with Rebecca before her death.

Mrs. Danvers is Manderlay’s housekeeper, and she is not about to stand for a Rebecca replacement. She skulks and lurks, refusing to change a thing in the house from the way it was kept when Rebecca was alive–treating the new Mrs. de Winter coldly throughout. Eventually, we reach The Scene. If you’ve seen the movie, you know the one.

Mrs. de Winter is wandering through the house and ventures into Rebecca’s room,  a room she has never set foot in before. Mrs. Danvers catches her there and remarks, “You’ve always wanted to see inside this room.”

Then she proceeds to show Rebecca’s clothes–tenderly, she takes a fur coat from a closet, rubs it against her face, then rubs it against Mrs. de Winter’s face, before adding, “I keep her underwear on this side.” She shows off Rebecca’s undies, talks of staying up until Rebecca came home so she could undress her every night, and finally takes out a sheer negligee and strokes it tenderly while Mrs. de Winter looks on, terrified.

The film won an Academy Award for Best Picture (the only one of Hitchcock’s to do so). But how did so much WLW subtext make it past the Hays Code? It’s hard to say–perhaps a queer woman was less offensive than a queer man, perhaps they didn’t pick up on the sapphic undertones, or, perhaps, it was palatable due to the fact that Mrs. Danvers dies horribly in the movie, crushed by a collapsing ceiling inside the house after she sets fire to it.

The queer coding is evident from the opening scene–we see the shoes of two men, walking. The shoes belonging to Bruno Anthony, a foppish, suave ne’er-do-well, are shiny patent-leather spectators. The other shoes belong to Guy Haines, a professional athlete–they’re sensible, practical.

Bruno has an effeminate affect from the beginning; he lets his mother do his nails, his father “disapproves” of him for reasons that are not made clear, and, perhaps most importantly, he’s obsessed with Guy. The splashy premise of the movie is this: Bruno, aware that Guy wishes to divorce his unfaithful wife, Miriam, so he can get remarried to a respectable woman, “jokingly” offers to murder Miriam if Guy will kill Bruno’s disapproving father in exchange.

Only it’s not a joke–Bruno goes right out and kills Miriam, then gets put out that Guy isn’t thrilled and keeps showing up at various social events, wanting to know when Guy is going to keep his end of the imaginary bargain.  In Bury Your Gays fashion, Bruno dies horribly in the end, crushed by a runaway carousel.

Strangers on a Train is based on the novel by lesbian crime writer Patricia Highsmith, but the two are very different stories. The film’s version of Guy is a pro tennis player and a man of infallible integrity who refuses to cave to pressure from Bruno. In the novel, Guy is a gloomy architect who does give into said pressure, ultimately committing the murder of Bruno’s father. Consumed by guilt, Guy comes undone while Bruno wants to, like, hang out. Bruno’s death in the novel–not at the hands of a runaway carousel, but a far less campy drowning–is not a moment of vindication for Guy, but one of torment.

My favorite example of queer coding in Hitchcock movies is in Suspicion–the characters in question are minor, but they’re allowed to just be, which is what makes them so marvelous. Cary Grant and Joan Fontaine’s married couple go to dinner at the home of Isobel, a mystery writer, and Phyllis, her live-in companion dressed in a man’s suit and tie, with a masculine haircut. Izzy and Phil, as they call each other, share an easy-going familiarity and appear to be excellent hostesses. That’s it. They aren’t psychopaths, serial killers, or deranged housekeepers. They’re just a chill same-sex couple hanging out in this scene, and it’s wonderful.

So the next time you sit down to watch a Hitchcock movie, don’t just keep an eye out for the director’s cameo–watch for other moments such as these.

To view the collection of columns by Kristen Lepionka, a regular contributor to Mystery Tribune, please see here.