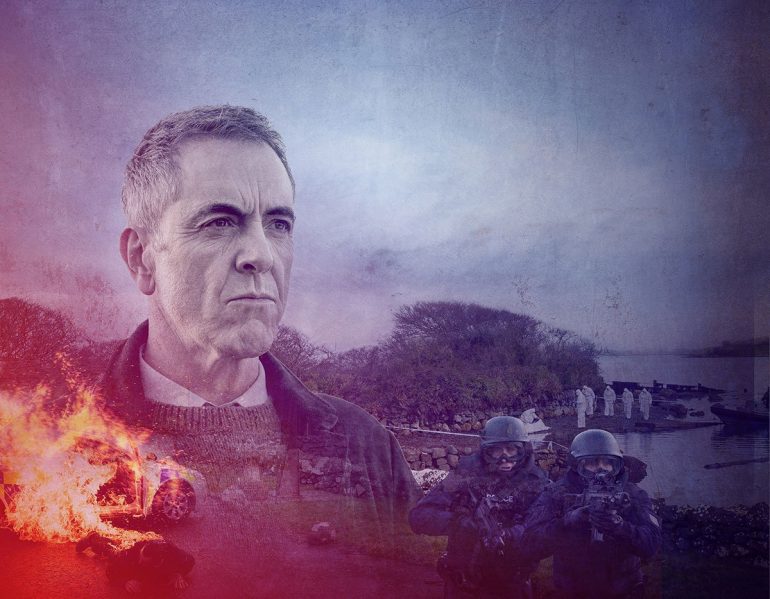 Irish crime thriller series “Bloodlands” is making its US and Canada debut on March 15, 2021 on Acorn TV.

The four-part drama stars Nesbitt as Tom Brannick, a veteran detective who delves into his own dark past to try and solve an infamous cold case with enormous personal significance: a series of mysterious disappearances linked to a turbulent period in Northern Ireland history over 20  years ago.

Bloodlands is co-executive produced by award-winning showrunner Jed Mercurio (creator and EP of Bodyguard and Line of Duty), as the first commission for his newly-formed production company HTM Television, and is the first-ever TV series by writer Chris Brandon (Red Rock).

When an expensive car belonging to a well-known crime associate and containing a possible suicide note is pulled out of the sea at Strangford Lough, Brannick instantly sees the connection to an infamous cold case with enormous personal importance. It seems someone is trying to force the police to re-open their investigation into a notorious and long-buried series of mysterious disappearances just prior to the 1998 Good Friday peace agreement ending The Troubles, the violent sectarian conflict that scarred Northern Ireland for three decades.

Bloodlands follows Brannick’s obsessive campaign to identify and unmask the legendary assassin behind these events, “Goliath,” nicknamed after one of the famous giant shipyard cranes that dominate the Belfast skyline.

Brannick has a special interest in the case; he believes his own wife, Emma – herself an intelligence officer involved in dangerous undercover surveillance of terrorists – was one of Goliath’s victims. Supported by his Detective Sergeant, Niamh McGovern (McKenna), Brannick launches an investigation without the approval of his superior officer and one-time friend Jackie Twomey (Cranitch). Brannick and McGovern embark on a journey to identify both Goliath – if such a person really exists – and whoever is behind this mysterious campaign to awaken the ghosts of the past. Bloodlands explores this conflict and investigates the impact of the violent past on the peaceful present.

Bloodlands is written and created by Chris Brandon (Red Rock), in his first-ever drama series commission. Executive producers are award-winning showrunner Jed Mercurio, Jimmy Mulville (Episodes) and Mark Redhead (The Secret, Bloody Sunday) for HTM Television and Tommy Bulfin for the BBC. . It was commissioned by Piers Wenger, Controller of BBC Drama and Charlotte Moore, Controller of BBC Content.