C. Matthew Smith, author of “Four Minutes on High”, is an attorney practicing in Atlanta with an undergraduate degree in English from Davidson College.

The instructions on the back of the box told him to heat the meal for four minutes on high. He turned the box back over and looked again at the photo. Sliced turkey breast, herbed stuffing, and carrots with something called a “cranberry demi-glace”. He sighed.

At his urging, Annie had gone to her sister’s farm for the Thanksgiving holiday ahead of him and had taken their son, Taylor, with her. “I have a deadline to meet,” he told her. “An installation. Exhibition opening this weekend. A holiday thing. I’m sorry. I’ll drive up Friday as soon as we finish, I promise.” The truth was, of course, that he didn’t install anything for a living, and he had no project to complete for work.

What he had was a feeling.

He dutifully slit a vent in the plastic cover with a filleting knife – one inch, not a speck more – and placed the container on the glass plate.

The microwave was brand new, purchased just yesterday. The old one had begun making a noise like a Cessna engine that once failed him near San Salvador. The shiny glass door – as yet free of Taylor’s fingerprints and the desiccated entrails of prior meals – appeared slick as the reflection of the first man slid across its surface. The door closed with a satisfying click, and he pressed the number “4” on the touch-pad. The interior illuminated, and his meal began to rotate with only the softest of whirs.

He thought, That is quiet.

He spun then, thrusting the filleting knife through the approaching man’s eye.

He thought, I hope the carrots will be that tender. I hate cold, chewy carrots.

He grabbed the man’s collar from behind and pumped his hand like a piston. The man’s skull struck the countertop so loudly that he worried it might crack the granite, not the other way round. The man slumped to the tile floor with a sound like those trash compactor bags Annie loves to overfill.

Man Number Two came from the mudroom. He knew because he heard the dog bowl rattle on the floor where it sat next to the running shoes and dusty galoshes. He kept low as he spun out of the kitchen and into the adjacent hallway. Number Two entered the kitchen just then, his bullets punching holes through the opposite wall. Chalky drywall clouds rained down on the bamboo laminate Annie had selected for the first floor’s hall and common areas.

He felt glass underfoot and looked down at the remnants of a digital picture frame that had been the subject of his and Annie’s last argument. He had picked one up for her as she requested, but when he brought it home, it was all wrong. Wrong frame, wrong size, not Bluetooth. She described the one she wanted in detail, but then he got it wrong a second time. After that, she huffed that she would just order it online herself.

He thought, Good riddance to that thing.

Then he thought, I better take the pieces with me tomorrow to replace it.

The display’s glass, it turned out, was just as good as any other glass at cutting. He used a triangular shard first to incise the tendons of Number Two’s pistol hand at the wrist when it peeked into the hallway. Then, when Number Two bent forward instinctively, howling his protest, he shoved it into the soft flesh of the neck and yanked.

The puddle forming on the floor reminded him of the cranberry demi-glace, and he thought, Was I supposed to stir at two minutes?

Then he thought, Does bamboo laminate stain?

He heard the faint creak of floorboards in the hallway upstairs – floorboards Annie had hinted a number of times he should replace. But they came in handy, he knew – alerting him, for example, when Taylor had left his bedroom in the middle of the night and would be sneaking downstairs to theirs. And so he conveniently had forgotten to do anything about them.

He knew Man Number Three likely had come in through Taylor’s bedroom, for it was the only room on that level with a rear-facing window. Annie had insisted on Taylor having the bedroom upstairs so bad men could not so easily access and kidnap him. He did not tell her that most bad men he knew weren’t limited to entering houses from the ground floor.

He thought, I hope Number Three didn’t knock the top off the terrarium.

Taylor kept the terrarium under the window in his room so his gecko, Mr. Bigeyes, could enjoy the sunlight in the morning. Months ago, Taylor had forgotten to replace the lid on the terrarium, and Mr. Bigeyes had gone on walkabout. Three nights later, they found him entombed in the bundled leg of Taylor’s freshly washed pajama pants. An early morning trip to the pet store later, and Mr. Bigeyes was restored to his home awash in dawn’s warm glow.

He thought, If Number Three let Mr. Bigeyes out, I’m going to be in a real pickle.

Beneath the stairs was an air conditioning vent where he stored a spare pistol. He unscrewed the cover with his pocket knife, reached his hand deep into the vent, and grasped the cool metal grip. A .22 semi-automatic: actually pretty quiet with the suppressor on. Creator of minimal mess.

He peeked out from beneath the stairs and shot Number Three between two of the balusters. He shot him first in the shin standing close to his head on the steps. Then, when Number Three collapsed on his fractured tibia, he plugged him again through the ear.

He moved quietly through the rest of the house, confirming that three was all they had sent and that Mr. Bigeyes was safe and sound.

When they re-did the stairs and the top landing two years ago, Annie had insisted on these spindly “modern” balusters for the railings. This, too, had resulted in an argument, as he was convinced Taylor too easily could break them with his kicking feet and ramming toy trucks. But Annie insisted they were “sleek” and “elegant,” and he relented as he usually did. Now suddenly he appreciated how spacious the gaps were between the thin balusters, how they allowed for a clear shot even at this awkward angle.

He thought, I will have to find a way to admit she was right.

He moved quietly through the rest of the house, confirming that three was all they had sent and that Mr. Bigeyes was safe and sound. He was glad Annie had agreed they should renovate their current house in the city instead of moving to a larger home in the suburbs. It was closer to Taylor’s school and to the building he told her held his office. It also was less square footage to search. He was upstairs in Taylor’s bathroom when he heard the microwave alarm.

Back downstairs, he removed the meal and set it on the island next to the pistol. He peeled back the corner of the clear plastic cover, and steam blistered his thumb and forefinger. The instructions on the box had warned him to “use extreme caution when peeling back the cover,” but he wondered what that actually meant. How would one peel it back, except with fingers in the inevitable path of steam that will burn them?

He thought, Maybe they mean for you to use pliers?

As he sat at the dining room table, he inventoried all he would have to do now before he could join Annie and Taylor. The Company would send a crew to assist with the bodies, but he was on his own for the rest. He needed to get that blood off the bamboo laminate as soon as possible. He needed to get the paint and spackle from the attic. He needed to pay someone a visit.

He picked up his phone, selected Annie’s number from the list of recent calls, and pressed to dial. “Hey, babe. How’s it going? Yep, just working away here. How’s Taylor?”

He lifted the fork to his mouth but set it down again as quickly.

He thought, Of course.

The cranberry demi-glace nearly burned the roof of his mouth. The carrots were still cold in the center. 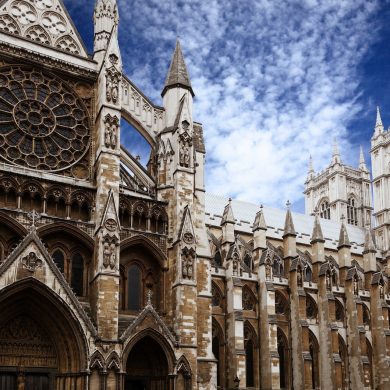 “Who Speaks For The Damned” By C. S. Harris Is A Smart Historical Mystery