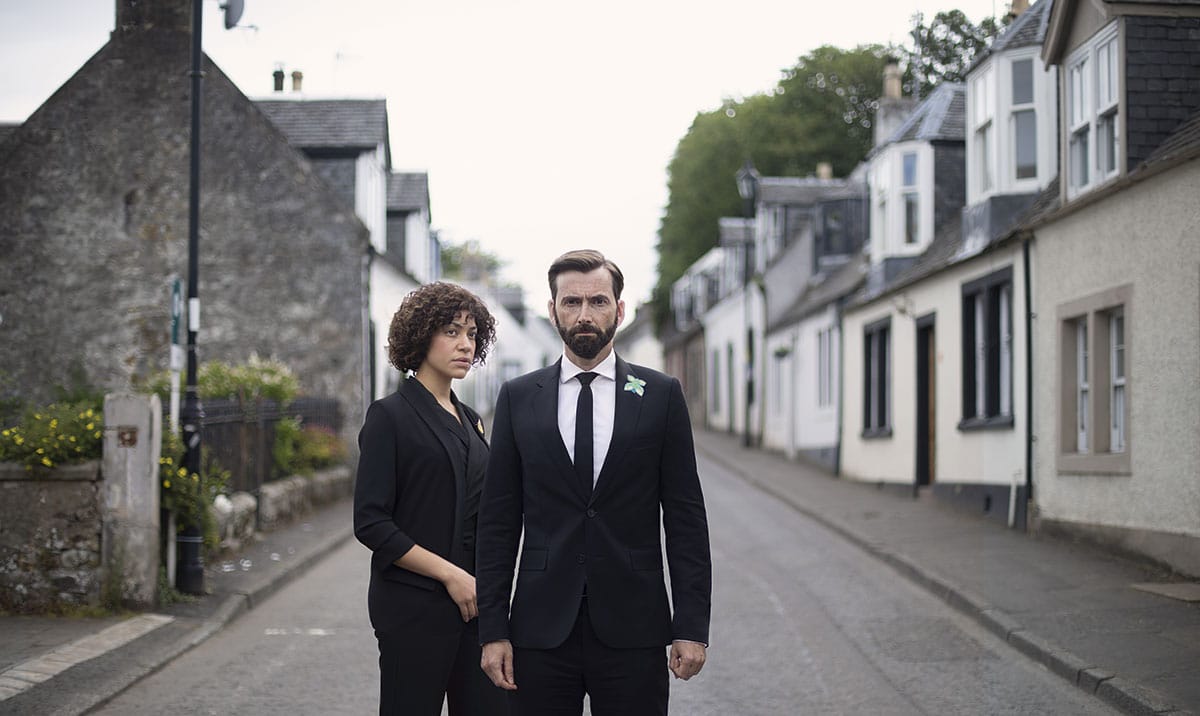 Scott Adlerberg takes a closer look at Acorn TV’s Deadwater Fell is a four-part miniseries that takes place in a rural Scottish village.

Acorn TV’s Deadwater Fell is a four-part miniseries that takes place in a rural Scottish village.  As it opens, we see a close-knit community.  Teachers lead a class of young children out from their school into the town center to watch a cross-country bike race pass through.  It looks like the entire village population, police officers included, watch and cheer as the cyclists go by.

Later, the townspeople gather for a kids and adults party where there is much laughter, conversation, light drinking and dancing.  When the party ends, everyone says goodnight and heads home in cheerful spirits.  The buoyancy ends abruptly, however, when that same night a fire breaks out in somebody’s house, and by the time the flames are extinguished, a family has been destroyed.  Three little girls are dead, and so is their mother, Kate Kendrick.

The only one rescued from the fire, though he is unconscious, is the father and husband, Tom Kendrick.  What could have happened?  The three children were found padlocked inside their room and all five family members were drugged through needle injections in their arms.  Another fact: the Kendricks property abuts the forest, and one of the girls had pine needles embedded in her foot.

It becomes clear fast that the Kendrick family was not the happy group most in the village took them to be, and when we learn that Kate had suffered from anxiety and post-partum depression and perhaps had even hinted in the past of not wanting to continue with her life, initial suspicion falls on her.  Mothers do commit familicide.  But Tom, as we discover, has darkness inside him as well, and so we have a situation where either parent could have committed the crime.

Written by Daisy Coulam, the creator of Grantchester, Deadwater Fell is partly a mystery and partly a look at a how a community deals with such a terrible event.  In this regard, and since it stars David Tennant, the series will bring Broadchurch to mind for Brit mystery fans.  Those who liked Broadchurch, I suspect, will also enjoy Deadwater Fell, although the more recent series is not quite up to the same level as Broadchurch.

Deadwater Fell is partly a mystery and partly a look at a how a community deals with such a terrible event.

That’s not to say Deadwater Fell doesn’t work.  It holds your attention for its duration and has a pleasing complexity.  Besides the Kendricks, whose married life we see unfold in flashbacks, we get to know their mutual friend Jess, played by Cush Jumbo, and Jess’ partner Steve (Mathew McNulty), a police officer investigating the crime.  Indeed, Jess is actually the series’ central character, a woman who was Kate’s confidant and helps raise Steve’s two young boys.

When Steve has differences with his ex, the boys’ mother, who has a boyfriend, Jess is the voice of reason who keeps things calm and functional among everyone.  Jess has seen Kate both up and down in mood, and she has trouble believing that her best friend would have killed her children.

A support for others, Jess has wants and emotional issues of her own; her second attempt at in vitro fertilization, so she and Steve can have a baby, fails.  Nobody in Deadwater Fell, which foregrounds relationships and human behavior as much as it does its mystery, is without their secrets and frailties, and the series does a good job showing how people cope or not with the pain and stresses in their lives.

Deadwater Fell…holds your attention for its duration and has a pleasing complexity.

And then there’s what’s known as toxic masculinity.  In ways organic to the story, Daisy Coulam explores this idea throughout the drama’s four episodes.  When Jess tells Steve that she had sex once with Tom behind Steve and Kate’s back, it prompts behavior from Steve that, while not violent, can only be called typically male.  Steve is essentially a decent guy, but in reaction to Jess’ revelation, he antagonizes her and indulges in a bout of anger and self-pity.

He does something ignoble on his job.  As a female co-worker of his says, rolling her eyes, “Men with their egos,” and Steve proves himself to be a man who has difficulty expressing his feelings about mistakes he may have made before.  Maybe he could have done something for Kate if he’d listened to her when she asked for his help.

And will he do better when he and Jess find that Steve’s younger son, grieving himself for the loss of his best pal, one of the murdered children, is picking at his arm and drawing blood – in a word, self-harming?  Steve is upset but tries to shrug it off at first, resistant to the idea of therapy for a boy so young, but both Jess and the boy’s mother work on him.  Like father, like son: has bottling up his emotions done much to make Steve’s life easier?  He’s a caring father, as it turns out, and has a mind open to the possibility of change.

Which brings me to the show’s other primary father: David Tennant’s ambiguous Tom.  The last time I saw the actor, he was wonderfully evil and charismatic playing the villain Kilgrave in the Marvel series Jessica Jones, and I suspected the worst about him here as soon as he became a suspect in the case.

Tennant is great at smiling with cold eyes, and in Deadwater Fell, his Tom is a person who exudes charm and politeness to the world while giving his wife an entirely different side of himself.  No wonder she’s depressed, and the cocktail of pills he plies her with “for her own well-being” does not help.  That he’s selfish and controlling is clear, but that does not mean he’s a murderer.  You can see why Anna Madeley’s Kate, her will ground down on a daily basis, would find it hard to simply leave him except perhaps by the ultimate solution.

Ambiguity holds sway in Deadwater Fell, and it takes a while for its mystery plot to coalesce.  At times, even as character information is revealed, motivations are a bit murky. But the murkiness has the feel of real life, where you wish you knew more about people and don’t, and anyway this a drama that puts more emphasis on the mystery of character and the unknowability of human beings than on the twists and turns of police procedure. I wouldn’t call it an A plus crime drama, but overall, it’s worth watching. 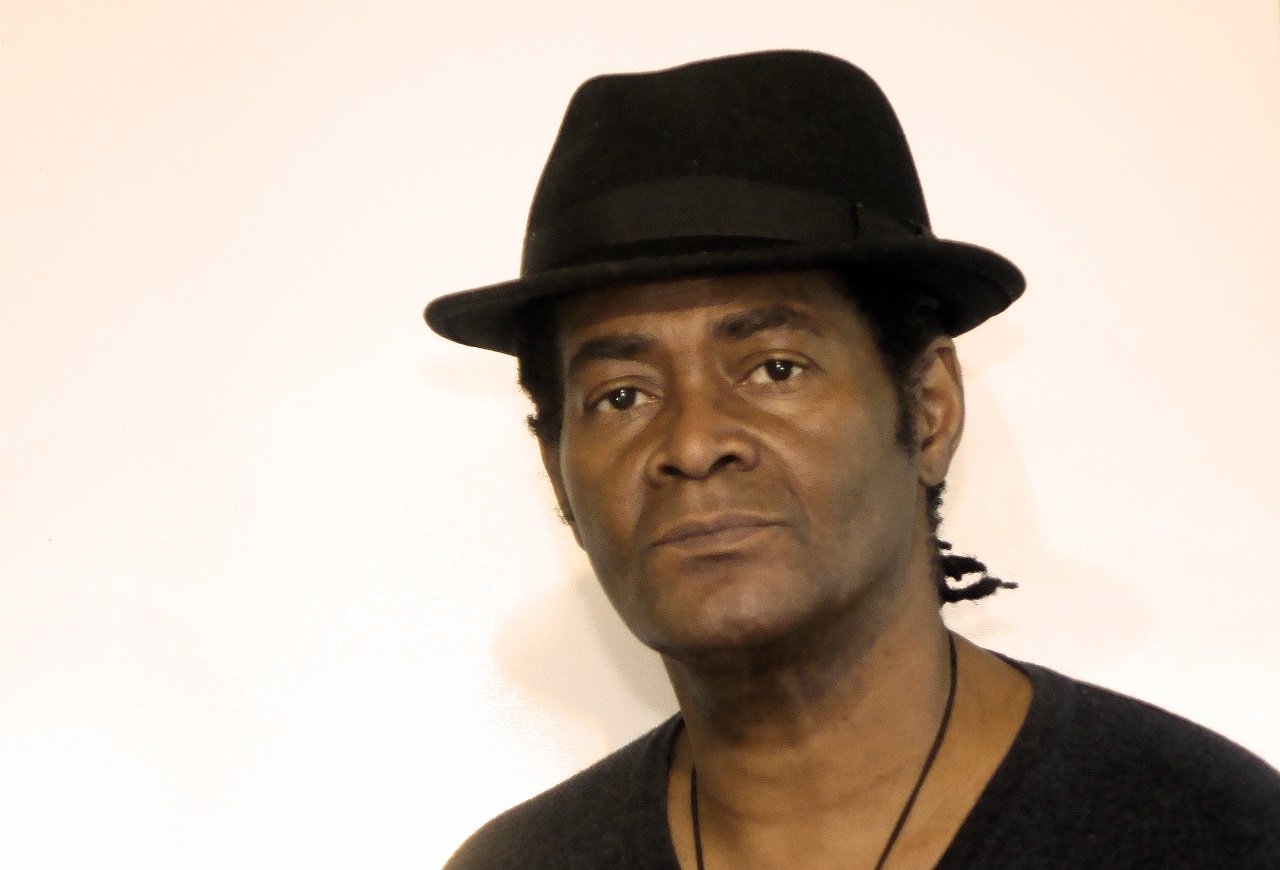