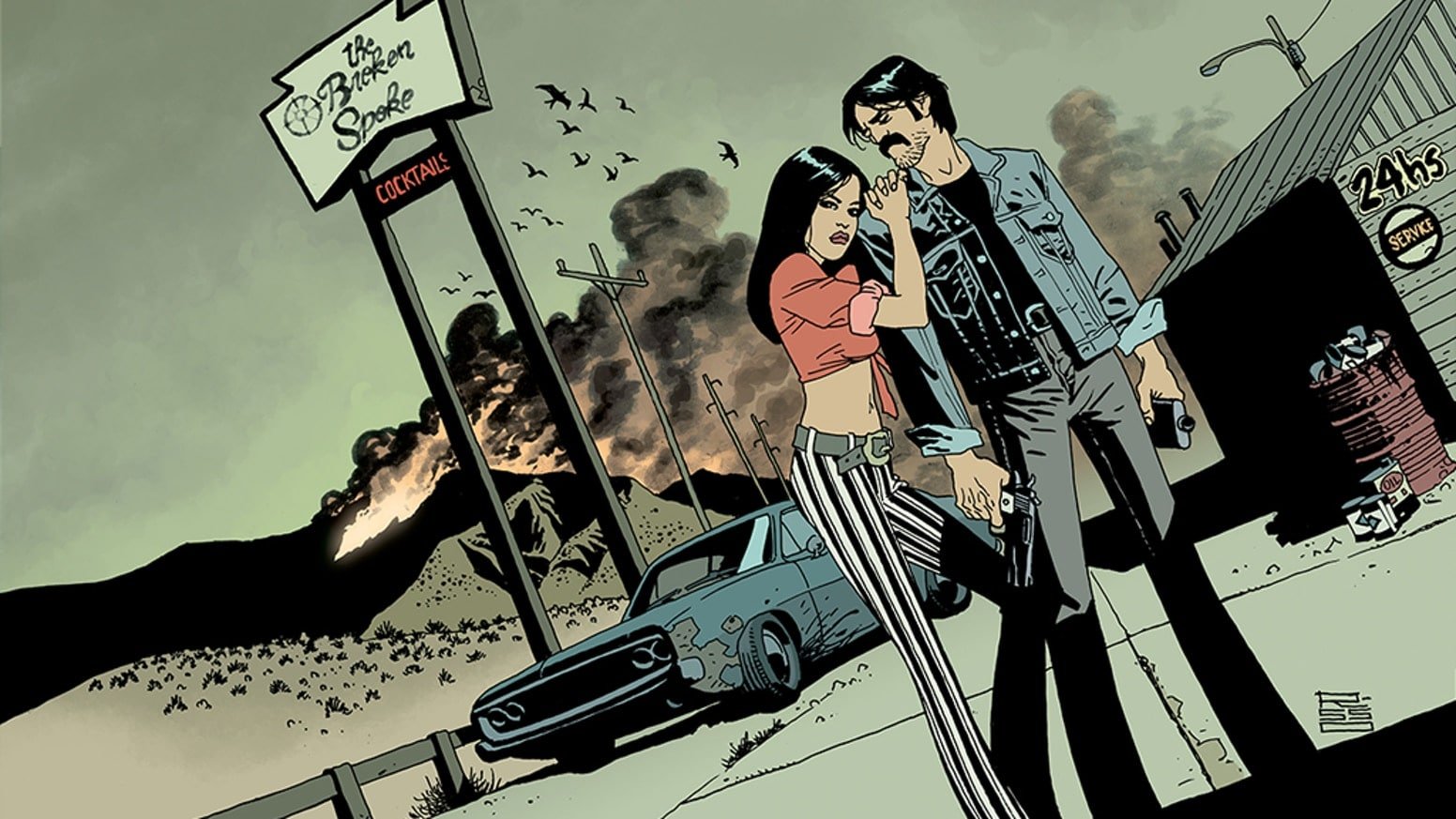 Crimes and Regrets in Words and Panels: On “Blacking Out” and “Bog Bodies”

Tobias Carroll takes a close look at “Blacking Out” and “Bog Bodies”, a pair of recent crime comics that offer taut, haunting looks into the violent aftereffects of violent ends.

In his excellent 2008 book Reading Comics, Douglas Wolk subtitled a chapter about 70s horror comics “The Cheap, Strong Stuff.” Ever since I first read that, it’s stuck in my mind as a memorable shorthand for a particular thread of pulp comics — some horror, some crime, and some that sit memorably on the border between the two. What could be more horrific than realizing that you’re the villain in a particular story, after all? And there’s a long line of great comics that, at their best, are as bracing as a shot of cheap vodka — or as head-clearing as a drink of spirytus, all 192 proof of it.

A pair of recent crime comics offer taut, haunting looks into the violent aftereffects of violent ends. One is set in a Southern California town beset by wildfires, while the other is situated in a rural corner of Ireland where the pastoral landscape cloaks harrowing secrets. Both feature impressive blends of all elements of the medium; both are also remarkably taut narratives, which makes the fact that both hit like a punch to the gut all the more intense.

Blacking Out begins, as many a classic noir narrative does, with its narrator enmeshed in a difficult situation and unsure of where to begin his narrative. Chip Mosher wrote the book, with Peter Krause on art; Giulia Brusco handled the book’s colors. (Initially funded via Kickstarter, the book can now be ordered via Indiegogo.) As its title suggests, protagonist Conrad is an ex-cop with a drinking problem. One of the book’s earliest sees him waking up in a stranger’s bed, unsure of how exactly he got there. 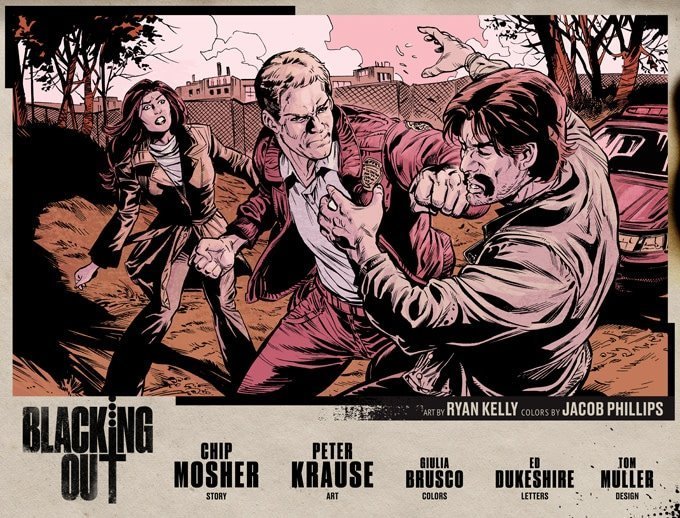 Conrad has been hired by Lund, an attorney, to search for evidence that might clear Lund’s client of the murder charges he faces in the death of his daughter Karen. And so Conrad goes in search of a piece of evidence that might prove Lund’s client’s innocence — a gold crucifix that’s gone unaccounted for. That this is a story of one man seeking redemption by literally searching for a cross feels a little on the nose at first — but given the relatively compressed nature of the story, dealing in archetypes is understandable.

That said, there’s also more going on here than one might think. It wouldn’t be a good noir narrative without a few twists, after all — and once I’d finished reading Blacking Out, I immediately looped back around to the beginning to see how Mosher had made clever use of Conrad’s flashbacks and narration.

Kraus’s work offers a good sense of place and distinctive looks for each of the characters, from Conrad’s leading-man good looks to the more uncomfortable demeanors of Lund and Conrad’s mechanic friend Mattie. As befits a book with flashbacks and unruly memories, Brusco’s color work helps keep things organized, and helps create a sinister mood even in broad daylight. And that’s before the fires get going.

If Blacking Out protagonist Conrad is a jaded observer of all he sees, Killian, the central character of Bog Bodies, is the proverbial walking contradiction. He’s a man tasked with lethal work for a crime boss in Dublin; he’s also introduced playing video games, and falls easily for a prank pulled by a colleague. From this graphic novel’s earliest pages, one is left with a sense that Killian might not be in the best line of work — and that’s a sense that grows exponentially as the story heads towards its conclusion.

Writer Declan Shalvey has written memorable dialogue for Killian, his colleague Keano, and several other people whose paths they cross on a fateful night. Shalvey first reached prominence in comics with his work as an artist, and he has an excellent sense for when to rely on a line of dialogue or an action beat and when to simply let the mood of the story take hold.

Gavin Fullerton’s art feels stylized without losing its grounding in realism — it’s at times akin to David Lapham’s work on Stray Bullets. And colorist Rebecca Nalty does utterly stunning work here; there are a few single-panel pages where the colors are utterly evocative — and a few single panels on the page where a sudden shift in color makes for a shocking turn of events.

Much like Blacking Out, Bog Bodies is a book where the twists are best experienced cold. Suffice to say, Killian finds himself in hostile territory, working with a young woman who’s also found herself in a perilous situation. As its characters wrestle with conflicts internal and external, all with a sprawling rural landscape around them, the video games and technology of its early pages drains away; this is a primal story at heart, one that could be told around campfires late at night.

Both Bog Bodies and Blacking Out touch on familiar tropes, but both Mosher and Shalvey are well aware of those tropes, how they work, and how they can be subverted. These are not stories for the faint of heart; they have within them lethal surprises, and their assurance as to where to start and end is just as impressive. 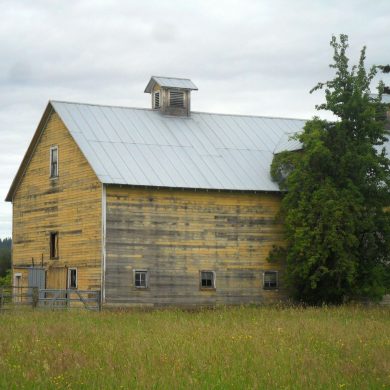