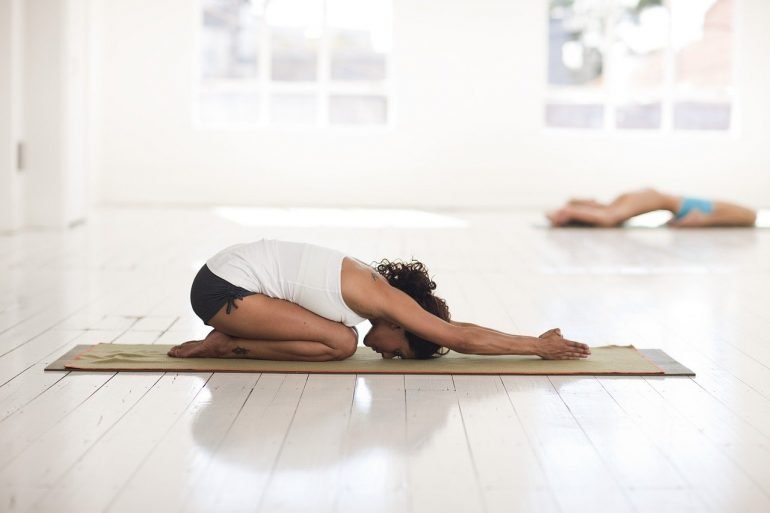 Philip Ellis, author of Corpse Pose, is a writer and journalist with bylines in Men’s Health, British GQ, Teen Vogue and VICE.

She didn’t know he was dead at first. When Maya first walked into the yoga studio and saw Kyle lying there, she assumed he’d simply fallen asleep during savasana. It wasn’t until she got closer, informing him in that tranquil-but-firm voice of hers that class was about to begin, that she noticed the blue tinge of his lips, and realised that Kyle was taking corpse pose literally.

Class was cancelled after that, obviously. Unfortunately, half of us had already arrived, so we were ushered into the women’s changing room while the police scoured the crime scene and conducted interviews.

We’re still here, waiting. We can just make out Maya talking to an officer in the next room, although it’s taking forever for them to take the short statement because she keeps hyperventilating. She needs to remember her pranayama exercises.

…she noticed the blue tinge of his lips, and realised that Kyle was taking corpse pose literally.

‘How much longer do you think they’re going to keep us here?’ Jenna asks. ‘I have an appointment with my nutritionist at four.’

I used to like Jenna when I started coming to yoga, but she’s one of those who really subscribes to the whole lifestyle, if you know what I mean. Bulgur wheat, burnt sage and bisexuality. It’s all in her newsletter, which I signed up to out of politeness, only to discover she believes she’s Birmingham’s answer to Gwyneth Paltrow.

‘I wonder if anybody’s called Kyle’s girlfriend yet,’ says Annie, and I blanch.

‘You mean he wasn’t gay?’ I ask. Wanda snorts in amusement.

‘Well I just assumed,’ I say, and I daren’t elaborate, because people are just so sensitive these days and I’m always getting things wrong.

I must admit, it does make me feel slightly better, knowing Kyle was straight. The gays have had such a terrible time of it. Although I imagine Kyle’s girlfriend, who I am just now hearing about despite having done downward dog next to the man for six months, will still be devastated.

‘Do they know how he died?’ I ask, thinking it best to change the subject, but apparently the police aren’t letting on if they know anything. Still, I can tell everyone else is curious. It’s human nature, isn’t it? Already, everyone here is planning how to tell the story in a way that best suits them. Wanda will be dining out on this at the pub later, Annie will call in sick to work tomorrow citing ‘psychological stress’, and Jenna is sure to find some way to make the entire thing about herself in her next newsletter.

I probably won’t mention it to anyone, though. It doesn’t do you any good to dwell on things like this, especially when you’re supposed to be avoiding stress, like I am. That was what brought me to Yardley Wood Yoga in the first place; my son Michael insisted I find a way to relax after my heart attack. The deep breaths and all that stretching have helped, to be fair. And after an hour of trying not to fall over in the middle of tree pose, I always feel like I’ve earned the iced bun I buy and eat on the walk home.

I’ve read lots of magazine articles about the importance of hobbies and social activity when you’re retired; they keep your body and brain limber, prevent you from becoming prematurely old. That’s what I always liked about Kyle. He was half my age, I could easily have been his mother, but he never condescended or made me feel out of touch like Michael does. He was a laugh, telling me ‘nice job’ when I managed to hold warrior three for the first time, and giving me a knowing look whenever Jenna would prattle on about her new favourite kale smoothie recipe.

We weren’t quite friends, but chatting with Kyle made coming to these classes feel less and less like something I was doing to keep my son off my back, and more of a genuine pleasure. I really am very sorry I killed him.

It was an accident, of course, although I don’t imagine the police would see it that way. Kyle had been telling me about his peanut allergy, and how severe it was, and I honestly thought he was joking! We’d made such a habit of ripping into Jenna, with all of her dietary quirks, I never for a moment thought he was serious. So this afternoon, I dropped a couple of KP dry roasted into his water bottle while he was fetching us a couple of mats before class.

When he started convulsing on the floor, I laughed, because I thought he was going along with the joke. Except he wasn’t, was he, and it was almost time for class to begin, and Maya was going to be there any second so I hung up my mat and grabbed the bottle and scarpered into the loo where I flushed the evidence. I hid there until I heard Maya scream, then I came out and pretended I was just arriving.

‘Such a tragedy’ I tell the nice officer, after he finishes questioning us all and says we’re free to go. ‘We’ll all miss him dearly.’

It’s true; yoga won’t be the same without Kyle. The guilt walks beside me as I make my way home, like an invisible witness. But I can’t let it get to me. I have to avoid stress, Michael keeps saying. I skip my usual visit to Greggs and go straight home, where I practise the deep, calming breaths I learned from Maya.

As I inhale, I think of Kyle’s girlfriend, who will have been informed by now. I think of the awful gagging sound Kyle made, and how I just stood there, frozen. I hold it all in my mind. The horror, the shame. Then, as I exhale, I let go of all that unpleasantness.