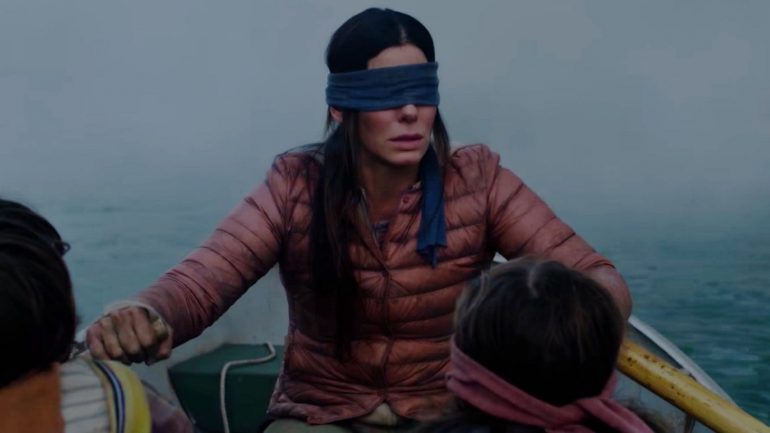 Bird Box: Ultimate Guide To The Book And Netflix Movie

The new Netflix movie Bird Box, starring Sandra Bullock, has already set a new Netflix viewing record in its first week. According to the video streaming company, since its premiere on Dec. 21, the original drama movie has been viewed by over 45 million accounts.

Bird Box became a viral sensation after several moments from the movie (most notably, an image of Bullock blindfolded rowing the boat down the river) became memes on social media.

Directed by Susanne Bier from a screenplay written by Eric Heisserer, Bird Box is based on the 2014 novel of the same name by Josh Malerman.

The film film follows a woman, played by Sandra Bullock, who, along with a pair of children, dubbed Boy and Girl, must make it through a forest and river blindfolded to avoid supernatural entities that take the appearance of their victims’ worst fears, regrets, and losses that cause them to die by suicide.

While on Rotten Tomatoes, the film holds an approval rating of 67%, general reaction to the movie is much more positive with 90% of reviews on Google like Bird Box.

Malerman is the American author and also one of two singer/songwriters for the rock band The High Strung, whose song “The Luck You Got” can be heard as the theme song to the Showtime show “Shameless.”

Malerman wrote the rough draft of Bird Box prior to the release of the 2008 M. Night Shyamalan film The Happening and the 2009 film The Road (although the novel The Road was written in 2006), which caused him to worry that the book “might get lost in the shuffle.”

Critical reception for Bird Box has been positive and Malerman has received comparisons to Stephen King and Jonathan Carroll.

The A.V. Club gave the book a B rating, writing “Malerman overreaches a bit in his debut, which could use as much attention to the cast as to the mood, but the mood is chillingly effective. Reading it feels like accepting a dare to walk into a strange place, eyes closed, with no idea who, or what, might be reaching out to make contact.”

Bird Box was made with the budget of around $19.8 million with the filming days in California taking around 45 days. The following represents the description of the movie plot (Disclaimer: This section includes spoilers).

A tense mother, Malorie, sternly informs two unnamed children, a girl and a boy, that they will be going on a dangerous journey down a river in a boat. She strictly instructs them to not remove their blindfolds—or else they will die.

Five years earlier, a pregnant Malorie is visited by her older sister Jess while painting. Before going to a routine pregnancy checkup, they briefly discuss a strange news story regarding mass suicides in Russia; however, Malorie dismisses the news story as irrelevant.

While they are leaving the doctor’s office later, Malorie sees a woman bashing her head into a glass panel, and realizes that the mass suicides from the news are now happening mere feet away from her. As panic and chaos erupt in the city, they attempt to escape in Jess’s car.

While Malorie is distracted by a ringing cell phone in the back seat, Jess briefly sees something that frightens her. She crashes the car in an apparent attempt to harm herself. An injured and horrified Malorie is unable to stop her sister, visibly affected by what she has seen, from stepping in front of a large truck and killing herself.

Malorie runs in the chaotic crowd from something no one can see or understand. She is rescued by strangers and joins a band of survivors hiding in a house, although one of her rescuers commits suicide in the chaos.

As media communications go off-line, they try to figure out what has happened. One survivor named Charlie surmises that demons are the cause. They all concur that simply seeing the creatures can cause humans to go insane and commit suicide. They cover the windows to shield themselves from the chaos and creatures outside.

As time passes, food supply concerns give rise to the discussion of leaving their safe house. Malorie, Charlie, and a few fellow survivors, Tom, Douglas, and Lucy, decide to go to a nearby supermarket to get supplies. They black out the windows in the car and use the car’s proximity sensors to navigate their drive to the supermarket.

During the drive they encounter the creature but manage to drive off, arriving at the store. Inside the store, Malorie finds pet birds which she decides to adopt. Douglas gets drunk and suggests that the group stays permanently in the supermarket, but others reject this idea. Hearing someone call for help, they open a loading dock door to let a man into the store.

As the door opens, the birds begin to screech and flap their wings, indicating that they can detect the creatures without seeing them. The man in the loading dock attacks the group because he is controled by the creatures in order to infect other humans. Charlie sacrifices himself to save the others, who are able to make it back safely to the house.

Later, Lucy and Felix steal the car, effectively abandoning everyone at the house without any means to return to the supermarket.

Soon thereafter, Olympia, a pregnant survivor, lets a wandering survivor, Gary, into the house against Douglas’s protest, and the group locks up Douglas in the garage. Gary speaks of infected survivors who are insane and are compelled to force unaffected humans to look at the creatures.

When both Olympia and Malorie go into labor, Gary reveals himself to be one of the insane people he described. He attacks the survivors in the house and proceeds to remove all the coverings from the windows. Gary forces Olympia and several other survivors to view the creatures and they quickly kill themselves.

Tom barely manages to kill Gary and save Malorie and the two newborns, but all the other survivors are dead.

Five years later, Tom and Malorie are living together with the children, whom Malorie calls only Boy and Girl, when they receive a transmission from a survivor stating that they are well and safe at a community, downriver. Tom wants to go to the safe community, but Malorie fears it is a trap.

Shortly after the communication, Malorie flees with the two children when a group of infected survivors finds them in the house in which they are hiding and attempt to kill them. Tom manages to kill all the infected, but while doing so he looks at the creatures which causes him to kill himself. 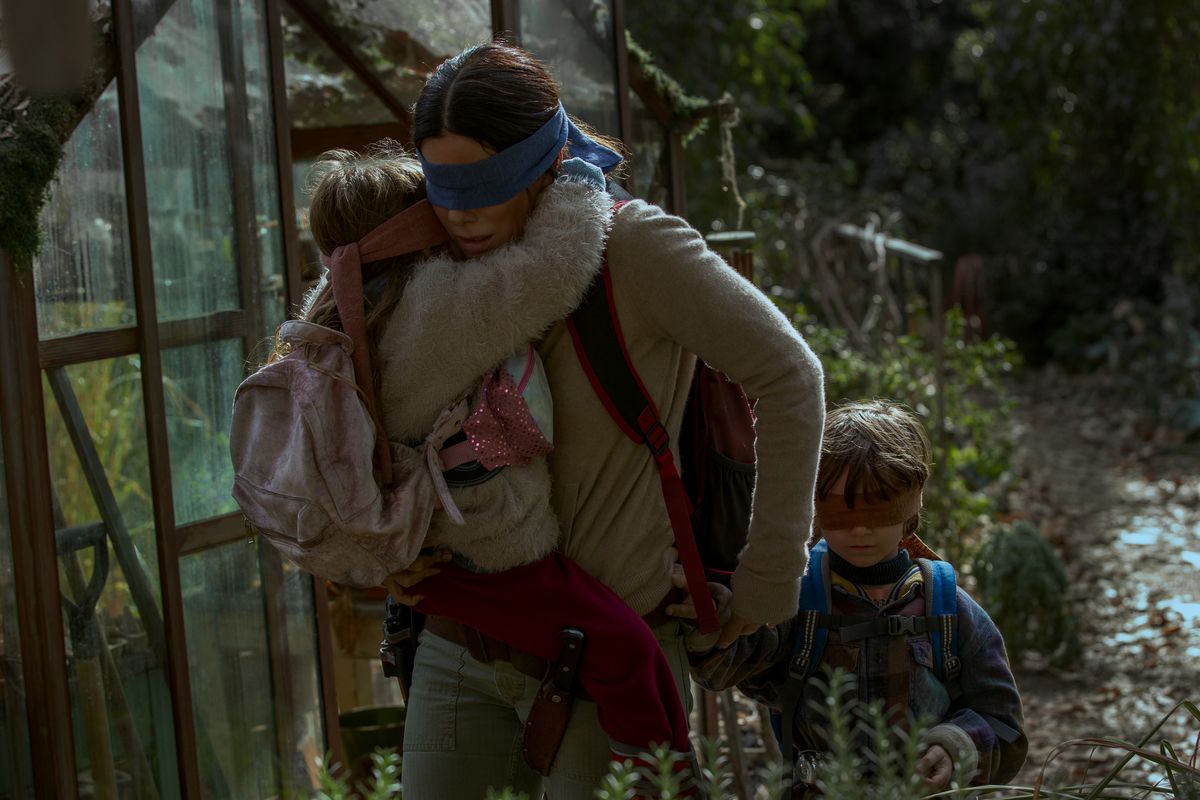 Malorie decides they have to seek better shelter. Blindfolded, she takes the children, also blindfolded, and the pet birds to a rowboat next to a river. Their journey is harrowing and dangerous. After surviving raging rapids, an infected insane man, and capsizing, they make landfall.

The entities tempt the children and Malorie to remove their blindfolds by mimicking their loved ones but are unsuccessful, and the small family eventually reaches the community.

Malorie learns that the compound is an old school for the blind, and most members of the community are blind, making them immune to the entities. She also reunites with Dr. Lapham, the doctor who attended her during her pregnancy a few years prior. She finally gives the children names, Olympia for the girl, and Tom for the boy, and releases the birds that have long kept her family from harm.