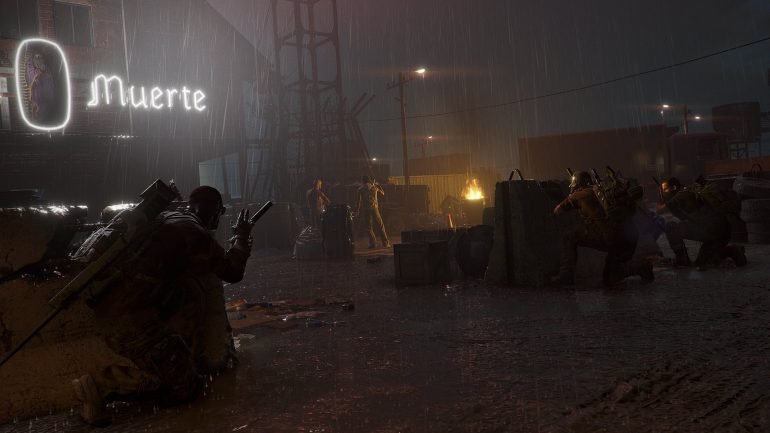 If you are looking for best PS4 games in the action and thriller genre, the following awesome picks are great starting points.

Hitman 2: Travel the globe and track your targets across exotic sandbox locations in Hitman 2. From sun-drenched streets to dark and dangerous rainforests, nowhere is safe from the world’s most creative assassin, Agent 47.

Your mission is to eliminate the elusive Shadow Client and unravel his militia, but when 47 learns his target’s true identity and the truth about his past, it changes everything.

Hitman 2 brings you brand new sandbox locations to plan out the perfect assassination. Hugely complex environments provide you with endless opportunities to take out your targets in creative ways.

Fallout 76: Bethesda Game Studios, the award-winning creators of Skyrim and Fallout 4, welcome you to Fallout 76, the online prequel where every surviving human is a real person. Work together, or not, to survive. Under the threat of nuclear annihilation, you’ll experience the largest, most dynamic world ever created in the legendary Fallout universe.

Reclamation Day, 2102 – Twenty-five years after the bombs fall, you and your fellow Vault Dwellers—chosen from the nation’s best and brightest – emerge into post-nuclear America. Play solo or join together as you explore, quest, build, and triumph against the wasteland’s greatest threats.

America, 1899. The end of the wild west era has begun as lawmen hunt down the last remaining outlaw gangs. Those who will not surrender or succumb are killed.

After a robbery goes badly wrong in the western town of Blackwater, Arthur Morgan and the Van der Linde gang are forced to flee. With federal agents and the best bounty hunters in the nation massing on their heels, the gang must rob, steal and fight their way across the rugged heartland of America in order to survive.

As deepening internal divisions threaten to tear the gang apart, Arthur must make a choice between his own ideals and loyalty to the gang who raised him.

As she races to save the world from a Maya apocalypse, Lara will ultimately be forged into the Tomb Raider she is destined to be.

Yakuza Kiwami 2: This game is the story of two rival clans on the brink of war. One year after the 10 billion yen incident, Kazuma Kiryu begins to build a peaceful life with Haruka Sawamura. Tearing him away, an assassination threatens to erupt in an all-out war between the Tojo Clan and the Omi Alliance.

Kiryu, the Dragon of Dojima, must travel to Sotenbori, Osaka in an attempt to broker peace between the rival clans, but Ryuji Goda, known as the Dragon of Kansai, will stop at nothing to get his war. In this world, there can only be one dragon.

Rebuilt from the ground up, Yakuza Kiwami 2 uses the Dragon Engine to update one of the series stand-out titles into a modern classic. Play fan favorite mini-games including updated versions of the Cabaret Club simulator and Clan Creator, or check out all new additions like an arcade port of Virtual On, golf bingo, and Toylets. Also new to Kiwami 2 is the “Majima Saga” which features Goro Majima in his own playable adventure revealing events that occur prior to the game.

The Inpatient: Discover who you are before it’s too late in The Inpatient; a PS VR Exclusive set in the Blackwood Sanatorium, over 60 years prior to the 2016 BAFTA award-winning Until Dawn.

With deep immersion that places YOU in the game, you take on the role of an amnesiac inpatient who must find out who you are and why you are in the Sanatorium. With a branching narrative, and different endings; every choice you make can drastically affect the way the game plays out.

Detroit: Becoming Human: Enter the near-future metropolis of Detroit in 2038 – a city rejuvenated by the introduction of highly advanced androids that exist only to serve mankind. But that’s all about to change.

Step into the shoes of three distinct android characters as this brave new world teeters on the brink of chaos. Your decisions dramatically alter how the game’s intense, branching narrative plays out. With thousands of choices and dozens of endings, how will you affect the future of Detroit?

As special police investigator Connor, your mission is to assist the Detroit Police Department in tracking down deviants – androids that have broken their programming, abandoned their owners or turned to crime.

Will you remain cool, calculating and ruthlessly analytical in your job? Or will you begin to feel empathy for the plight of your fellow androids and question the legitimacy of your mission?

The second character is Markus – Played by Jesse Williams (Grey’s Anatomy; The Cabin in the Woods): Your chance to spark the fire that could lead to an android insurrection lies through Markus, another ‘deviant’ who has broken free of his programming.

After escaping his master and joining a growing underground faction of dissidents, Markus takes charge in the organised liberation of Detroit’s android population – but in sending a strong message to humans, will you take him on the path of pacifist disruption… or defiant violence?

The third character is Kara – Played by Valorie Curry (The Twilight Saga: Breaking Dawn – Part 2; Blair Witch): See the impoverished and run-down side of Detroit through the eyes of a newly-manufactured android that has broken her programming.

Classed as a deviant and on the run with an innocent girl she’s sworn to protect, Kara is thrown into a brutal world where you must guide her to either accept the inequalities around her… or strive to do something about them in an effort to keep her surrogate child safe.

Hidden Agenda: Can you hold your nerve in the hunt for the infamous ‘Trapper’ killer? Use your mobile device to make tough decisions that impact the branching storyline in this PS4 exclusive crime thriller from the PlayLink range. And with Until Dawn developer Supermassive Games at the helm, you never know what’s lurking around each dark and sinister corner.

But this chilling mystery has a twist from the very start: bring up to five friends into play and you’ll each have an objective to work towards.

Will you be driving towards a common goal, or working against each other?  Influence is power and each choice may alter the unfolding story… but how far will you go to fulfil your own agenda?

Uncharted: The Lost Legacy: This game follows treasure hunter Chloe Frazer on her journey to recover an ancient Indian artifact.

In order to recover an ancient artifact and keep it out of the hands of a ruthless warmonger, Chloe must enlist the aid of renowned mercenary Nadine Ross and venture to India’s Western Ghats to locate the Golden Tusk of Ganesh.

In Chloe’s greatest journey yet, she must confront her past and decide what she’s willing to sacrifice to forge her own legacy.

For the first time, Uncharted: The Lost Legacy will take the series to the south-western coast of the Indian peninsula— the home of the former Hoysala Empire—which will feature an exotic mix of urban, jungle, and ancient ruins environments.

Tom Clancy’s Ghost Recon Wildlands: This game is the very first military shooter in a massive open world that you can play entirely solo or in four-player co-op.

A few years from now, Bolivia has become the largest cocaine producer in the world. The Santa Blanca cartel has turned the country into a narco-state.  As a Ghost, you must stop the cartel by any means necessary.

You can create and fully customize your Ghost, weapons, and gear. Enjoy a total freedom of playstyle. Lead your team and take down the cartel, either solo or with up to three friends.

The game also allows you to explore Bolivia: Journey through Ubisoft’s largest action-adventure open world. Discover the stunning diverse landscapes of the Wildlands both on and off road, in the air, on land, and at sea with over 60 different vehicles.

This remarkable action game has been developed by Ubisoft.