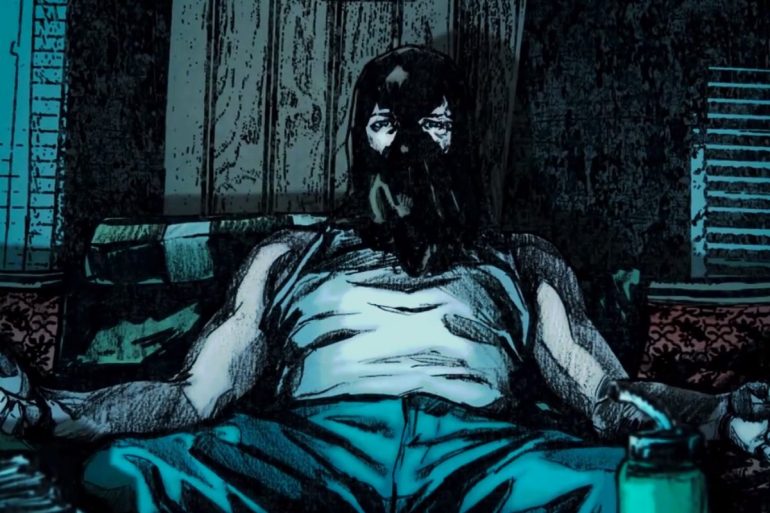 Some of best crime comics of the year are being released this year, in a wide spectrum ranging from action thrillers to cerebral serial killer stories.

Green River Killer by Jeff Jensen (Author) and Jonathan Case (Illustrator), features the story of one of America’s most notorious serial killers and the true detective who cracked the case. This second edition true-crime graphic novel also features an introduction by Brian Michael Bendis.

Throughout the 1980s, the highest priority of Seattle-area police was the apprehension of the Green River Killer, the man responsible for the murders of dozens of women. In 1990, with the body count numbering at least forty-eight, the case was put in the hands of a single detective, Tom Jensen. After twenty years, when the killer was finally captured with the help of DNA technology, Jensen spent 180 days interviewing Gary Leon Ridgway in an effort to learn his most closely held secrets–an epic confrontation with evil that proved as disturbing and surreal as can be imagined.

Torso by Brian Michael Bendis and Marc Andreyko is the gripping tale of Eliot Ness’ chase of America’s first serial killer: the mysterious torso killer! This 1999 Eisner Award-winner for Comic Book Excellence is completely reformatted in this newest edition to the Jinxworld library!

Cleveland. 1935. Eliot Ness, fresh from his legendary Chicago triumph over Al Capone and associates, set his sights on Cleveland. He went on a crusade that matched, and sometimes even surpassed, his past accomplishments. But dismembered body parts started washing up in a concentrated area of Lake Erie Sound. Headless torsos that left no clues to their identity or reason for death.

Elliot Ness and his colorful gang of The Unknowns chased this killer through the underbelly of Cleveland for years. As far as the public was concerned, he was never captured. But what really happened is even more shocking.

Written and illustrated by Brian Michael Bendis, the awrd-winning author Daredevil, Ultimate Spider-Man, New Avengers and more, and Marc Andreyko, this new trade paperback edition of Torso is a must-read.

Polar Volume 0: The Black Kaiser is a great action thriller by Victor Santos who is both author and illustrator for this upcoming title. Black Kaiser is now also a Netflix Movie with Mads Mikkelsen.

A Cold War espionage agent with ice in his veins comes to the United States aiming to take out a political target, but the mission is never what it seems.

The Black Kaiser, a name whispered in dark corners amongst power czars across the globe. A cold knife in the dark. A secret agent. Delve into the origin of the most feared assassin as his current mission lands him on American soil and in direct conflict with the nefarious agency known as the Damocles Initiative.

New York Times Bestseller Victor Santos (Filthy Rich, Violent Love) takes you back to the beginning with the origin of his iconic character Black Kaiser! A violent and fast-paced thriller. Now a Major Motion Picture.

Tyler Cross: Angola by Fabien Nury (Author), Bruno (Illustrator)  features one of our favorite crime comics characters: Tyler Cross, criminal for hire. In this new story, a hell called “Angola,” is the biggest high-security prison in the United States, surrounded by swamps and crushed by the sweltering Louisiana sunshine.

And then just to put the cherry on the cake, the Scarfo clan has put a price on his head, and there are a whole load of Sicilians among Tyler’s fellow inmates. If Tyler ever manages to get out of this penitentiary hell, it sure won’t be for good conduct.

Sherlock Holmes: The Vanishing Man is a well-crafted title which will delight the fans of traditional mysteries: Michael Williams is a family man. A reliable man at both work and home. When he disappears, there are no clues left behind.

Now, it is up to Sherlock Holmes and Dr. Watson to find out what happened to him and what danger may be lurking around every corner.

When a chance encounter with a captivating femme fatale leads to a violent mob retaliation, hard-boiled detective Mike Hammer finds himself dodging both bullets and hard broads as he undertakes the most dangerous case of his career.

The Black Hood, Vol. 3 is the return of the biggest Dark Circle title, featuring a dark, revenge-driven crime story.

This is the third installment of the series as the name implies: The series starts with the story of a man driven to the brink, blacklisted and left brutally changed who must crawl through the wreckage of his life to defeat a gang of deadly criminals hell-bent on setting the streets of Philadelphia aflame.

Fueled by rage and empowered by years of experience upholding the law, the new Black Hood is a visceral, conflicted and flawed urban vigilante–but he’s also the city’s last hope.

In the third installment in this series, “The Nobody Murders”: The Black Hood is no more. Sure, there are rumors that the former cop known as Greg Hettinger is still out there, blending in with the homeless population — and emerging only to stop a violent attack before vanishing again. But the ruthless assassin known as The Nobody considers the Black Hood a loose end, and he’s willing to slaughter dozens to flush him out.

How high must the body count rise before Greg steps forward to face an opponent he can’t possibly beat?

In Lowlifes by Brian Buccellato (Author), and Alexis Sentenac (Illustrator, Artist) , Human lives are supposed to be priceless. Theirs are worthless. Los Angeles is not all sunshine, surfing, and red carpets. Behind the facade, the City of Angels is an illicit, morally ambiguous world of fading dreams. Grand is a revenge-seeking cop clinging to the good man he was.

Leonard is an addict who wants his family back. Rip is a haunted thug embroiled in underground fighting. And Wendall is the criminal corruptor pulling all of their strings. In the seedy L.A. underworld, lives intersect like freeway overpasses. When Wendall’s poker game is robbed, three lowlifes attempt to stay one step ahead of each other, because redemption or destruction is their only ticket out.

The Damned Vol. 3: Prodigal Sons is the third volume of the fan-favorite series by the award-nominated creative team behind The Sixth Gun.

Years of playing every side in a world of Prohibition-era crime and violence spearheaded by demonic crime families, Eddie’s unfortunate gift of never staying dead may have reached its limit. While he seeks out their mother in the afterlife, Eddie’s cursed brother Morgan has tried to keep them both out of the hands of those are determined to make sure Eddie stays dead this time around.

Corto Maltese by Hugo Pratt enters the crossroads of magic and the occult, astrology and history, religion and mythology in the first English-language translation of Pratt’s award-winning book.

Visiting the writer Hermann Hesse while researching alchemists with his old friend Professor Steiner, Corto drinks from the “source of the Alchemy Rose” and becomes immersed in a surreal and dreamlike adventure that involves Klingsor, the quest for the Holy Grail, Death, the Devil, and the Sandman, among others. This complexly plotted graphic novel was among Hugo Pratt’s most philosophical ruminations on the imagination.