Julian Gustave Symons (pronounced SIMM-ons; 30 May 1912 – 19 November 1994) was a British crime writer and poet. He also wrote social and military history, biography and studies of literature. He was born in London and died in Kent.

Julian Symons was born in London to a Russian or Polish-born father and an English mother of French and Spanish antecedents. He was a younger brother, and later the biographer, of writer A. J. A. Symons. He left school at 14. He founded the poetry magazine Twentieth Century Verse in 1937, editing it for two years. “He turned to crime writing in a light–hearted way before the war and soon afterwards established himself as a leading exponent of it, though his use of irony to show the violence behind the respectable masks of society place many of his books on the level of the orthodox novel.”

As an early Trotskyite, he applied for recognition as an anti-capitalist conscientious objector in World War II, but was refused by his tribunal. He chose not to appeal, and ended up in the Royal Armoured Corps 1942 to 1944, when he was invalided out with a non-battle-related arm injury. After a period as an advertising copywriter, he became a full-time writer in 1947. During his career he won two Edgar Awards from the Mystery Writers of America and, in 1982, received the MWA’s Grand Master Award. Symons served as the president of the Detection Club from 1976 till 1985.

Symons’s 1972 book Bloody Murder: From the Detective Story to the Crime Novel (published as Mortal Consequences in the US) is one of the best-known critical works in the field of crime fiction. Revised editions were published in 1985 and 1992. Symons highlighted the distinction between the classic puzzler mystery, associated with such writers as Agatha Christie and John Dickson Carr, and the more modern “crime novel,” which puts emphasis on psychology and motivation.

Symons published over thirty crime novels and story collections between 1945 and 1994. His works combined elements of both the detective story and the crime novel, but leaned clearly toward the latter, with an emphasis on character and psychology which anticipated later crime fiction writers such as Ruth Rendell and P.D. James.

His novels tend to focus on ordinary people drawn into a murderous chain of events; the intricate plots are often spiced with black humour. Novels typical of his style include The Colour of Murder (1957), the Edgar-winning The Progress of a Crime (1960), The Man Whose Dreams Came True (1968) The Man Who Lost His Wife (1970) and The Plot Against Roger Ryder (1973).

Symons wrote two modern-day Sherlock Holmes pastiches, as well as a pastiche set in the 1920s. In A Three Pipe Problem (1975), the detective was “…a television actor, Sheridan Hayes, who wears the mask of Sherlock Holmes and assumes his character. The book neatly reversed the usual theme of the criminal behind the mask by having a rather commonplace man wearing the mask of the great detective.”The Kentish Manor Murders was written in 1988. 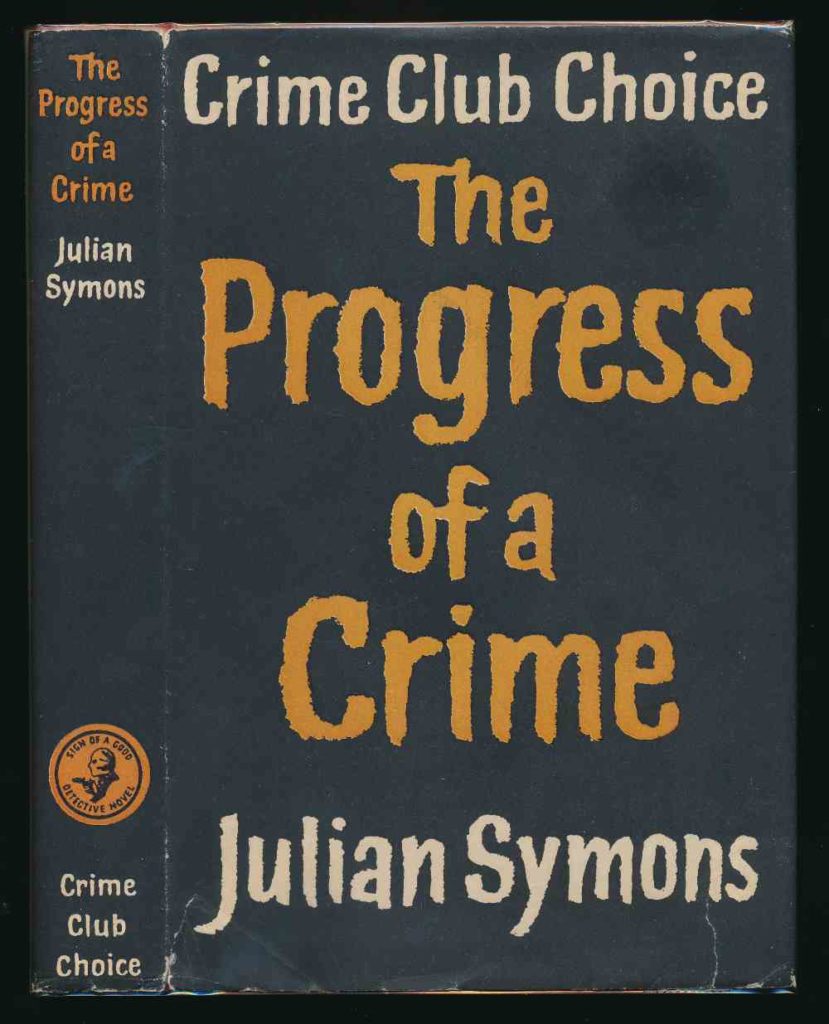 For his 1981 book The Great Detectives, he wrote a Sherlock Holmes pastiche instead of a biographical sketch. Entitled “How a Hermit was Disturbed in His Retirement,” the events of the tale take place in the 1920s as Sherlock Holmes is drawn out of retirement to solve an unusual missing persons case. The story was included in the collection The Further Adventures of Sherlock Holmes, in which it was given the more Doylean title of “The Adventure of Hillerman Hall.” He also made occasional forays into historical mystery, such as The Blackheath Poisonings(1978), which was filmed for television in 1992.

The Progress Of A Crime

Hugh Bennett, young reporter on a local paper, witnessed a terrible crime – a group of boys stabbed a man to death on Guy Fawkes’ night, right in front of the fire on the village green. But as Bennett attempts to write the story for his paper, doubts begin to creep in about what he had actually seen, and he finds himself facing an immense moral dilemma. On first publication, The Progress of a Crime was seen as setting new standards in crime fiction.

Start typing to see results or hit ESC to close
thrillers featured news our picks book review
See all results
Subscribe to our newsletter and stay in the loop on the best of mystery art and writing
More Stories
BookRix: Good Source For Finding Free Mystery and Thriller eBooks