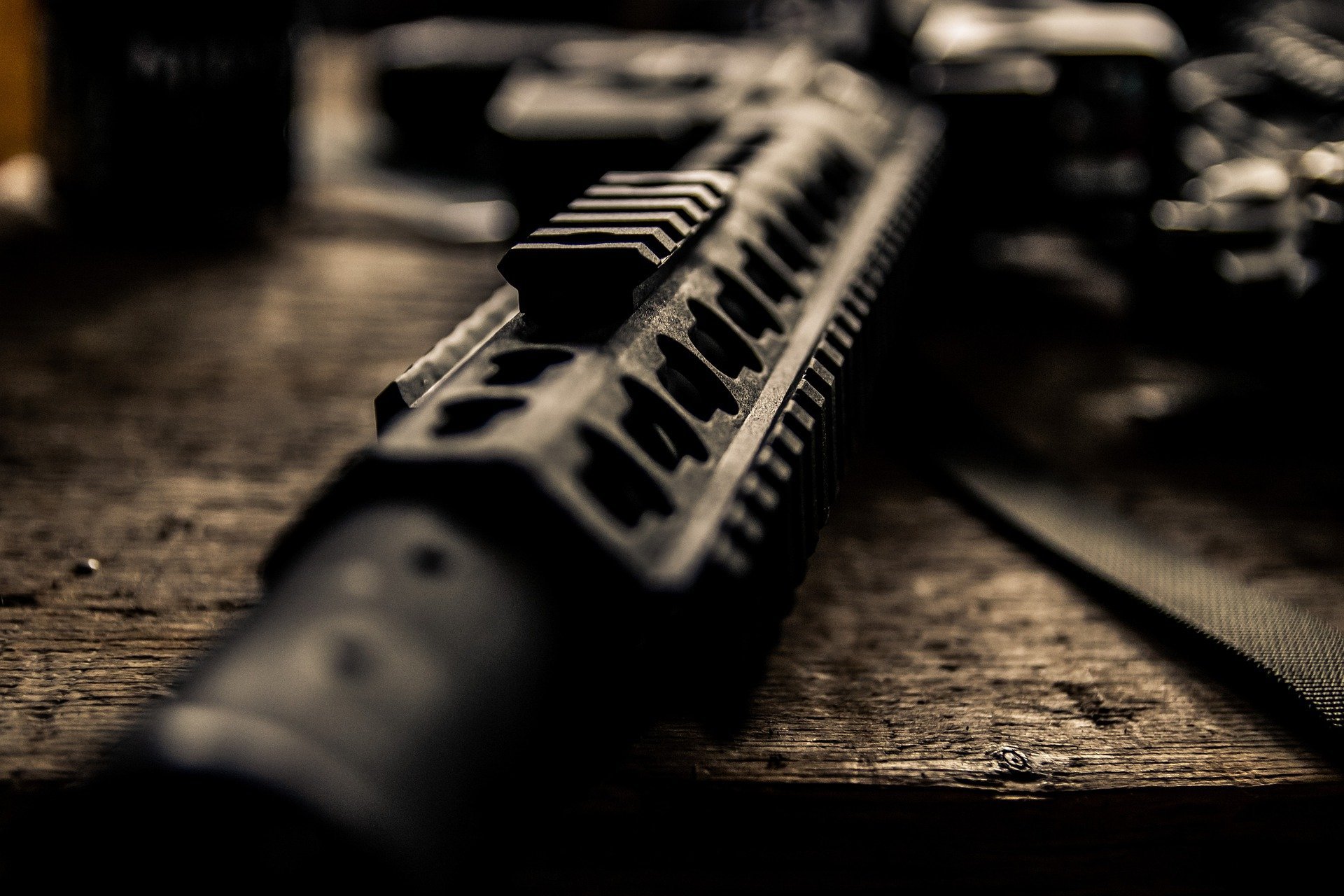 Sean Tuohy, author of All Clear” is the Co-Founder of the Writer’s Bone Podcast network. He currently resides in New England.

“What are you doing here?”

The roar of Lieutenant Robert Hanks’s voice caused the buzzing mobile command bus to fall silent. A dozen officers cramped in the narrow work area froze. Hanks stood at the far end of the bus, glaring at me. I fought the urge to shrink under his accusing finger.

“All officers needed,” I said after a moment, “that’s what it said on the radio.”

“All active officers,” Hanks snarled, “Last time I checked, Scott, you were desk-bound.”

“This is an active SWAT situation, I only need SWAT officers.”

Hanks towered over me but he knew to keep his distance. He had seen me spare at the department gym. It never ended well for my opponents. I met his glare.

“I am still a member of this team,” I said through clenched teeth.

“This is my team now,” Hanks said, hands on hips, “I don’t need some burn out on my team.”

“You mother-” I started to launch myself toward Hanks. Seeing the uncapped rage boiling in my eyes, Hanks began to stumble back. A pair of powerful hands clasped me from behind and kept my boots planted on the ground. John Harris had to use all two hundred fifty pounds on his six-foot-seven frame to hold me in place.

Angry embarrassment replaced fear on Hanks’s face. He pointed toward the door.

“Get her the hell out of here!” He ordered, “She’s god damn psycho!”

I could only see red; my rage centered on Hanks. I was ready to smash his head through a window. John tugged me, speaking in a gentle whisper.

He was right, of course. I allowed my body to go slack. I gave Hanks one final hard glare and stormed out with John covering my back. I walked through the mobile command, SWAT techs kept their eyes downcast. A flash of embarrassment sliced through my anger, followed by disappointment. Did I just prove Hanks point? Was I burn out?

I gave Hanks one final hard glare and stormed out with John covering my back.

We stepped off the bus under bright blue skies and looming buildings. I leaned against the bus, taking deep calming breaths in vain. John stood with me.

I shut my eyes, continued breathing, and shook my head no. I hadn’t been good for a long time. As the anger slipped away, I caught a flashing image of my late husband David smiling at me. A surge of joy cut through me.

“Hanks is an asshole,” John said.

I nodded in agreement. I’ve been dealing with cops like Hanks my whole career. Guys who thought my place was in the kitchen, not working in SWAT. They could never see me as a cop.

I opened my eyes, my heart slowing down. I took in the scene. Winter Street is a narrow lane in downtown Boston, running between Park street and Downtown crossing. Usually, brimming with walking tourists making their way to the Common. Today, both ends were barricaded. Police cruisers with silent roof bar lights flashing red and blue filled the street. SWAT officers position their weapons at the entrance of First National Bank.

Observing the scene, a charge of excitement coursed through me. The tension dialed up high. These were the moments I lived for. The excitement dropped away when I realized I could not take part in it.I was sidelined.

“You think Hanks can handle this?”

I threw John my hardest, no stare, “Have you ever seen him handle something like this?”

“He handled  that nut job a couple weeks ago, the one holed up in his apartment.”

“Didn’t that guy kill himself?” I reminded my partner.

I let out a long sigh. Less than thirty feet from me, three gunmen held six hostages inside the FIrst National Bank. Staring back at me through the floor to ceiling windows of the bank were six terrified weeping faces.

“You could handle it,” John said, honestly brimming in his eyes.

Less than thirty feet from me, three gunmen held six hostages inside the FIrst National Bank.

Smiled at my partner,”Maybe but didn’t you hear? I’m a burn-out.”

“The captain never should have pulled you,” John said and then looked at the bank, dread creeping into his voice, “I beat he is regretting it now.”

Before I could reply heavy foot falls caused me to turn my head. Storming off of the bus was a tall pasty skin SWAT Officer named Duncan. He had his scoped rifle slung over his shoulder. The kevlar vest fitted to his chest did not matchw ith the fresh face and innocent eyes. He spotted John and I, shook his head in disappointment as he approached us.

“Rachel, that was bull shit.”

“Hanks has no idea what he’s doing.”

“Yeah, isn’t that the truth” I pointed my chin toward his rifle, “Where are you off to, kid?”

“Hanks wants me on overwatch,” Duncan paused for a moment, worry spread over his young face.

“I don’t know,” Duncan said with concern, “Hanks is planning to storm the bank.”

I looked at John, “What the hell is he thinking?”

One glance at the bank told me that storming it would be a bad idea. The hostages stood in the windows as human shields. There was only one way in, the front doors. That meant those human shields would be used.

“The chief okayed this?” I asked Duncan.

Duncan shrugged, “Above my pay grade.”

Duncan left to take a position with his rifle. I stared at the bank. A ball of dread expanded in my chest.

David returned my thoughts. A warm memory of him comforting me after a rough day on the job. I was in the middle of a breakdown, debating leaving the force.

David’s caring eyes blinked away. I made my decision to get those people out. I slipped my Glock out from the holster and handed it over to John.

John stared in bewilderment as I set off across the street toward the bank. As I approached the front door, I raised my hands in the air, keeping my eyes forward.  Behind me, I heard harsh whispers of concern from my fellow SWAT officers.I blocked them out. I focused on my breathing.

I stopped in front of the door. A middle-aged woman  stared back at me from the other side.Nose pressed flat against the glass, tears streaming down her cheeks. I focused on my breathing still.

A man in a colorful Clown mask appeared behind the woman. She stiffened with fear. Tears poured out harder. The man leveled the barrel of a sawed-off shotgun against her head.

“What do you want?” The man’s voice muffled by the mask.

“I’m Officer Rachel Scott. I need to check on the hostages.”

“Screw you,” he shouted back, “We want a car in thirty minutes, or we start shooting hostages.”

The woman released a scared yelp.

“Hey asshole,” I said, “I  go in and check on the hostages, or the two dozen cops behind go in there. They won’t ask nicely like me.”

The Clown froze. He stared at me for a long moment before he swore under his breath and unlocked the door. He yanked me inside, slamming shut the door behind me. I kept my hands up in the air. The bank was a small branch with teller windows on the far end, with a still sealed vault behind them.

I stood on the smooth marble floor. In front of me, leaning on the teller window, was a heavyset man with a white mask on. His black t-shirt was tight over bulging muscles. His tree-trunk arms dotted in crude prison tattoos. Spotting me caused him to jerk up. He held a pistol in a dual grip with the barrel pointed at my head.

“What the hell is this?” The big man bellowed.

Clown came up behind me, “She says she needs to check on the hostages.”

“Screw that,” the big man said and thumbed back the hammer on his pistol, “She’s a cop.”

An explosion of fear erupted from my gut. I pushed it back down. Kept my breathing even.

“You put a bullet in me, and you won’t walk out of here alive,” I told him.

The Big Man kept his pistol trained on me. The Clown spoke up, “Listen to her.”

Begrudging, he lowered his pistol to his side. Clown stood in front of me, his shotgun hanging by his side. I noticed to my left the third suspect. A tall, long-limbed man with a Harry Potter mask on his head. Unlike his hardened partners this guy was all nervous energy.

Keeping my hands up in the air, I spun in a circle, making a big show of sweeping the bank.

“Any way you fellas will lay down your guns and walk out of here?”

“We’re not walking out of here in handcuffs,” The Big man said.

I was halfway through my rotation. Building up speed.

I shook my head, my circle almost complete.

Clown brought his shotgun up to his shoulder, “And why the hell not.”

I came in faster then Clown expected. My foot came off the ground in a high and round kick. My heel connected with the shotgun with enough force to knock it from Clown’s grip. The shotgun clattered to the floor.

Before he could react, I stepped forward and threw all my weight into shouldering Clown. The force sent him flying backward. The Big man was bringing up the pistol when Clown slammed into him. The two went flaring back into the teller window.

I charged forward. Clown was struggling back onto his feet. I drove my elbow into his red plastic nose. There was a sickening crunch. His head flew back, and he fell to the ground.

The Big Man was back on his feet, still gripping his pistol. My heel launched forward, snapping into the Big Man’s knee. There was a resounding pop. He yelled in pain and began to fall to the ground. I snatched the pistol and wrestled it from his hand. Over the sound of my heart pounding I heard movement behind me. I spun around, pistol at my side.

Clown stood on rubber legs. Blood poured out from his mask, he was bringing his shotgun up. I began to bring the pistol up, but I wouldn’t make it in time.

The pistol butt cracked Clown in the back of the head. He let out a grunt before falling face first to the floor. Harry Potter stood there, chest heaving. He dropped the pistol, held his hands up.

“On the ground,” I ordered.

He obeyed. I cuffed him, along with his partners.

“I’ll let them know what you did here today,” I told the kid.

He nodded his head, “Thank you.”

I let out a long-held sign. From the corner of my eye, I watched as the SWAT officers advanced toward the front door.

If you’ve enjoyed All Clear by Sean Patrick Tuohy, you can visit our free digital archive of flash fiction here. Additionally, premium short fiction published by Mystery Tribune on a quarterly basis is available digitally here.