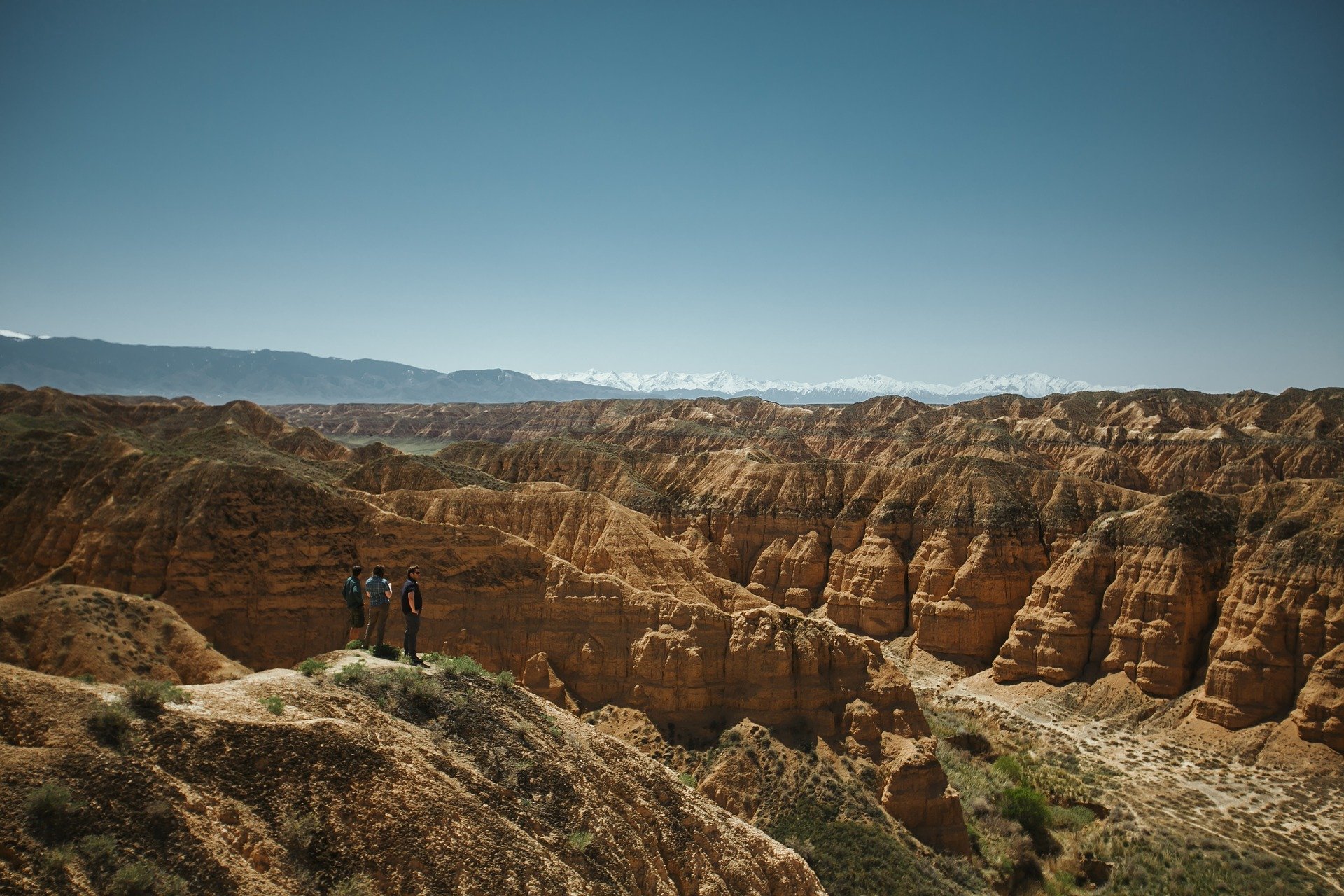 Deep Past, the new novel by Eugene Linden, draws on his celebrated non-fiction investigations into what makes humans different from other species to create a fascinating adventure thriller. The book mixes fact and the fantastical, the realities of academic politics, and high stakes geopolitics—engaging the reader throughout the story.

In Deep Past, a routine dig in Kazakhstan takes a radical turn for thirty-two-year-old anthropologist Claire Knowland when a stranger turns up at the site with a bizarre find from a remote section of the desolate Kazakh Steppe. Her initial skepticism of this mysterious discovery gives way to a realization that the find will shake the very foundations of our understanding of evolution and intelligence.

Corrupt politics of Kazakhstan force Claire to take reckless chances with the discovery.  Among the allies she gathers in her fight to save herself and bring the discovery to light is Sergei Anachev, a brilliant but enigmatic Russian geologist who becomes her unlikely protector even as he deals with his own unknown crisis.

Ultimately, Claire finds herself fighting not just for the discovery and her academic reputation, but for her very life as great power conflict engulfs the unstable region and an unscrupulous oligarch attempts to take advantage of the chaos.

What follows is an excerpt from the book, provided to Mystery Tribune by Rosetta Books.

It was three weeks after that day that Claire got the news. It came in the form of a phone call while she was with the research staff. Pete had looked with alarm at Claire’s stricken face after she put down the phone. “What? We didn’t get the funding?” Claire shook her head. “Oh, we got the funding, all right. All we wanted.” Pete sighed with relief. “If you don’t mind me saying, you’ve got a strange way of conveying joy.”

Claire was distracted. “Oh, sorry, Pete. That was just something that has come up at Rushmere that I’ve got to deal with. I’ll be back in a bit.” As she left, she patted Pete’s hand. “Don’t worry, funding’s secure.”

Claire went back to her cabin to think about the call. She shook her head at the irony. Things with Delamain had gone well—too well. The call had come not from Delamain, but from William Friedl, the chairman of her department at Rushmere. Like Flo, a baseball fan, Friedl had begun the conversation jovially, saying, “Well, Claire, you hit a four-bagger with Delamain.” Claire was instantly on her guard.

Friedl, a legendary sourpuss, did not do jovial without some ulterior motive. “Thanks, Bill. I’m glad. But why did they call you, not me?” Friedl had cleared his throat. “Well, turns out that they have a problem, and it’s actually a problem for Rushmere as well.” He paused, as though gathering his thoughts, and then said brightly, “And they were so impressed with you that they think you’re the solution.”

At this point, Claire thought back with bitter irony to her taking stock moment of a few weeks ago when she had thought that she had a predictable and satisfying glide path to her career.  That’s flattering, Bill, but what can I do for Delamain from Florida that I’m not already doing?”

There was a long pause. “You’re right, Claire. You can’t solve our problem from Florida.” He let that sink in. Claire could barely get out the words. “So where would I have to be to solve their and your problem?” Again Friedl cleared his throat. “Maybe I should give you a bit of context.”

“I think it would be a good thing to do this, Claire. I know you did some work on domestication as a grad student…”

Claire was alarmed, “Where are we talking about, Bill?”

“Hold your horses.” Friedl laughed for reasons that soon became apparent. “I think you know that yours is not the only project affiliated with Rushmere that Delamain is funding.” Friedl went on to explain that the lead investigator of a project investigating the domestication of horses, Russell Clausner, had become gravely ill.

He’d been picked up by medevac and flown back to the US, and it was unclear when he would be able to return to the field. “Just where is this field site?” Claire interrupted with a bit more edge in her voice. She’d been out of touch and the sprawling Center for the Study of Evolution, which housed anthropology, sponsored many field projects.

“I’ll get to that, but hear me out. This study is a big ticket for both Delamain and us. As you know, the mandate of Delamain is to promote the understanding of the relationship between humans and animals”— Claire knew that the Delamain spinster whose money funded the foundation had died without heirs, but for seventeen cats—“The project has to do with a new theory about the domestication of horses. It’s a big deal for them, and with the field season just beginning, they don’t want it to be leaderless.”

“But I’m needed here,” Claire said, only partially succeeding in keeping a plaintive note out of her voice. “Actually, the trustees said that you’d so effectively set things up that—and I think I’m quoting you—‘The project could run itself.’”

Fuck, thought Claire, as the tumblers fell into place on the surprise visit and the arched eyebrow.

Sensing that he had the advantage, Friedl had plowed on. “I think it would be a good thing to do this, Claire. I know you did some work on domestication as a grad student, and if you’re going to get that full professorship in the anthropology department, don’t you think it would help if you actually did some research that directly related to humans?” The message was loud and clear: “Don’t rock the boat.”

The research team had been standoffish and nervous at first. Claire had explained that the project had to be a high priority for both Rushmere and Delamain…

Claire wanted to say that her work was related to humans, but she knew she was trapped. “So, where?” There was silence. “Where, William? If I’m going to go there, you’re going to have to tell me at some point.”

In the Quonset, Clair fretted with her dirty-blond hair and stared at her laptop as she turned her attention to the email that she had been dreading, a report to her funders that would—without laying blame—give them a sense of her first impressions of where the project stood. Claire was settling in. She’d been at the site for three weeks now.

The research team had been standoffish and nervous at first. Claire had explained that the project had to be a high priority for both Rushmere and Delamain, as they had requested that she put aside her own work to make sure the research continued here. She’d also said that she had no ambitions to bigfoot onto their territory, take credit for their work, or change the direction of the project. She told them that she was just there as an administrator until Russell could return.

The trouble was, Russell’s three years of exploration really hadn’t turned up much. Which was too bad, because she had been pleasantly surprised when she dug into the proposal and initial field reports. Russell had proposed to explore the origins of horse domestication in the Botai culture of northern Kazakhstan. The Botai and horses had been bound together sometime around fifty-five hundred years ago, when the relationship shifted from predator-prey to partnership.

It would have helped, however, if, over the past three seasons, the researchers had subsequently found one horse bone dated more than fifty-five hundred years old to submit for DNA sampling, or any archaeological evidence at all that might have supported Russell’s thesis that  domestication did not occur in Kazakhstan, but Mongolia, and had traveled West with nomads.

Russell had been intrigued by new evidence that cats had domesticated humans—DNA evidence showed that domestic cats from the Middle East traveled into Asia, suggesting that rather than different peoples domesticating their local cats, the cats themselves had chosen to follow nomads and invaders eastward—he had wondered whether other animals, horses for instance, also had undergone a more complicated history of domestication.

Claire now had plenty of time to bone up on the project, since she was confined by the weather to quarters on the harsh verge of the Kazakh Desert. A particularly sharp gust of wind rattled the Quonset and brought her thoughts back to her initial status report. Claire was about to take another stab at writing when she heard a knock at her door.

She started to get up to answer when she remembered that she wasn’t really dressed. “Just a sec,” she called as she threw on a khaki

shirt and pulled on a pair of shorts, wondering who in the world would be out in this storm. Most likely it was one of her research assistants.

She prayed it wasn’t Tamerlan, the creepy minder from the government she had taken an instant dislike to when she had made the initial round of introductions. It wasn’t. She opened the door a crack to see a tall, rangy man she didn’t recognize, covered in dust and shielding his face from the stinging wind. “Dr. Knowland,” he said from behind his shielding arm, “I’m Rob Rebolet, head of security for Transteppe—you know, the mining company.”

Mystified, Claire didn’t know what to say. “Uh-oh. Has one of the team taken a bulldozer for a joy ride? I promise I’ll make them return it,” she stammered. The man offered a small smile and said, “Maybe I could step in?”

“Uh, sure.” Claire cracked the door so he could slip through along with a few pounds of windblown sand. Once inside, he remained standing. There was no place to sit except for Claire’s chair. “OK,” said Claire, all business. “What’s up? Something must have happened to cause the chief of security to trek forty miles in this weather.”

The big man looked at his hands. “Well, that’s the thing . . .” He paused and changed directions. “I heard that the team here is researching horses, ancient horses, right?” Claire relaxed and nodded cautiously. She knew this drill. On any dig, someone, usually a tribesman, would show up with samples of what they were looking for, usually concocted in the previous few weeks.  “You should know that I’m brand-new here. Russell, the project leader, got sick and had to be taken home.”

“I’d heard about that. I think we supplied the medevac helicopter. I hope he’s OK.” Claire nodded her head. Nobody was hoping for Russell’s speedy recovery more than her. “We all do. Thanks. So what’s up?”

The big man looked at his hands. “Well, that’s the thing . . .” He paused and changed directions. “I heard that the team here is researching horses, ancient horses, right?”

“Anyway, in the lower quarter of the concession, which is basically desert, the wind uncovered something—bones.” Rob, sensing her skepticism, looked embarrassed. “The thing is, the bones were arrayed, they were big, but I don’t think they were horse bones.” Claire made an effort to sound interested. “Have you seen many horse bones?”

“Some—my family works a ranch outside Prescott.” Claire realized that she was sounding like a jerk and changed her tone. “If they aren’t horse, what do you think they are?”

“Bigger ’n any horse bone I ever saw.”

Claire was disappointed. The ancient horses she was looking for were much smaller than the present-day animals. Knowing now that he came from a ranching background, she said,

“Cow?” Rob shook his head, “Seemed thicker, longer—would be a cow for the ages.” Claire pulled out the chair for her desk. “Please sit down.”