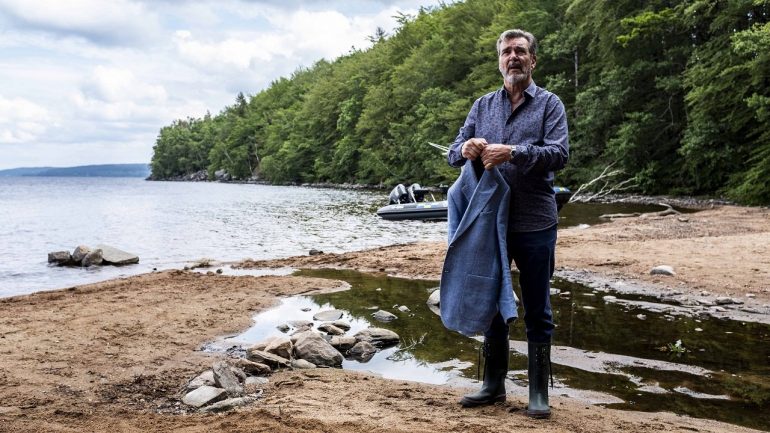 Please see below for our April’s selection of binge recommendations for gritty crime series:

When a car containing a possible suicide note is pulled from the sea, veteran Northern Ireland police detective Tom Brannick (James Nesbitt, Cold Feet) sees the connection to an infamous cold case that holds enormous personal significance for him – a notorious and long-buried series of mysterious disappearances 20 years ago during a dark period in Northern Ireland history, including that of his wife.

This intense Irish crime thriller follows Brannick’s obsessive campaign to identify and unmask Goliath, the legendary assassin behind these events- in an explosive cat-and-mouse game where the stakes have never been higher. Co-executive produced by Jed Mercurio, creator/EP of Bodyguard and Line of Duty. Streaming on Acorn TV following its BBC One UK premiere in February.

This intrepid series based on the popular Swedish crime novels by Leif GW Persson follows smug detective Evert Bäckström (Kjell Bergqvist), an occasional TV expert famous for having solved 99% of all cases he has taken on. But when a bullet-ridden skull is found in the Stockholm archipelago, DNA results confirm it belongs to a victim of Thailand’s 2004 tsunami. Bäckström is faced with an inexplicable mystery that not even he could have imagined.

When an expensive car containing a possible suicide note is pulled from the sea, veteran Northern Ireland police detective Tom Brannick (James Nesbitt, The Missing, Cold Feet, The Hobbit) instantly sees the connection to an infamous cold case that holds enormous personal significance for him. It seems someone is trying to force the police to re-open their investigation into a notorious and long-buried series of mysterious disappearances over 20 years ago during a dark period in Northern Ireland history.

This intense Irish crime thriller follows Brannick’s obsessive campaign to identify and unmask the legendary assassin behind these events, a semi-mythical figure nicknamed Goliath: it’s an explosive cat-and-mouse game where the stakes have never been higher. Bloodlands premiered on BBC One prior to its North American launch on Acorn TV. Co-executive produced by Jed Mercurio, creator/EP of Bodyguard and Line of Duty. (1 EP, 2021)

Regarded by many as the New Zealand version of Midsomer Murders, this acclaimed detective series filmed amid the beautiful landscape of the country’s North Island returns with six feature-length, standalone mysteries featuring compelling characters, dry humor, and piquant wit.

Into this mix, Faith is confronted by a terrible and long-buried figure from her past: her mother, Rose Fairchild (Celia Imrie, Better Things, The Best Exotic Marigold Hotel), whose reappearance uncovers secrets in Faith’s background and will force audiences to ask the question: “Who is Faith Howells?”. Faith’s ordeal across the series transforms her from a stay-at-home, fun-loving and carefree mother to detective, action hero and lover. She takes risks and gambles to keep her family out of danger and finds a new inner strength. (2 EPS, 2021)

A crime drama exploring the lives of undercover detectives Liam Ketman (Nick Berry, EastEnders, Heartbeat) and Garth O’ Hanlon (Stephen Tompkinson, DCI Banks, Drop the Dead Donkey). While experiencing the pressure of living double lives, they are in for a shocking awakening when they realize just how unpredictable life can be. (8 EPS, 2003)

Based on Leif GW Persson’s popular Swedish crime novels, this series centers around detective Evert Bäckström (Kjell Bergqvist) – a rock star among cops who is famous for having solved 99% of all cases he has taken on.

Starring as a TV expert doesn’t help his ego or reputation -he thinks he’s a genius—and he is, at solving crimes. When a woman’s skull is found, it seems she was murdered recently, but DNA points to her death in the 2004 tsunami. Prosecutor Hanna Hwass (Livia Millhagen) believes it’s a mistake, but Bäckström sees a case only he can solve: a woman who has died twice. (6 EPS, 2020)

A dark crime drama with a supernatural edge, One Lane Bridge takes us to a small town upended by a mysterious killing. The story revolves around unexplained events that occur on an infamous One Lane Bridge that connects two ends of town. While investigating the murder, an ambitious Maori detective Ariki Davis (Dominic Ona-Ariki, The Commons), inadvertently reawakens a spiritual gift that endangers his life, but may help solve the mystery of One Lane Bridge. Also starring Joel Tobeck (Ash vs Evil Dead) and Sara Wiseman (A Place to Call Home). (6 EPS, 2020)

In this bittersweet drama set in the picturesque market town of Shrewsbury, Jess (Brenda Blethyn, Vera) and Jacob Copplestone (Kevin Whately, Inspector Morse) have been happily married for twenty years and now live with Jacob’s cantankerous and demanding mother, May (Rosemary Harris, The Undoing), his sweet and good natured aunt, Brenda (Anna Massey, Oliver Twist) and his devout and elderly cousin, Nathan (Peter Sallis, Last Of The Summer Wine).

With selfless dedication, Jess has given up her job as a librarian to care for “the oldies.” But when her husband disappears, Jess’s world starts to fall apart. She now has to question the entire basis upon which her life has been built and come to terms with her newly found freedom while contending with her exasperating relations. (TV Movie, 2003)

Mystery Tribune’s recent coverage of Acorn TV and the most notable shows and movies on this streaming service is available here.