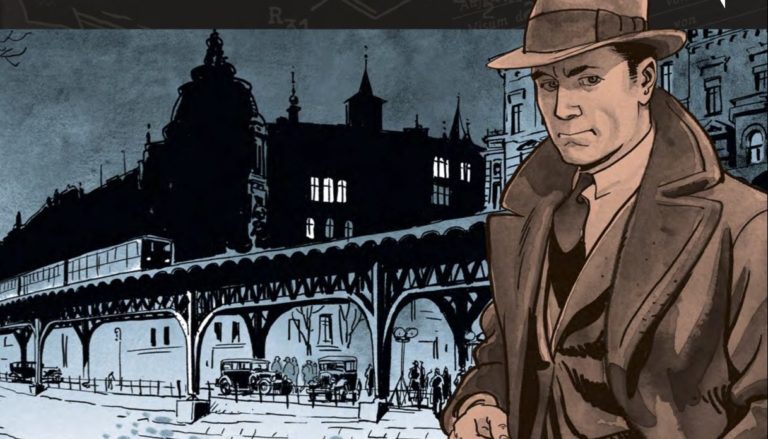 A Conversation With Arne Jysch On Graphic Novel “Babylon Berlin”

Arne Jysch is the name behind texts and illustrations of Babylon Berlin, the Hard Case Crime graphic novel adaptation of the book that inspired the new Netflix series of the same name.

In Babylon Berlin, following an unfortunate incident of manslaughter and at a moment of radical change in Germany, Detective Inspector Gereon Roth moves from his old position in Cologne to a new appointment in Berlin. He stumbles into an ever-growing criminal investigation into a pornographic sex ring, discovering that he can trust no one, not even the police.

How the story-line changes direction to Russian Gold is an intriguing part reserved for readers immersing themselves in this new title. However, Arne Jysch had plenty of other interesting views to share with Mystery Tribune in regards to Babylon Berlin and other comic topics.

Babylon Berlin is not only a crime graphic novel but an interesting foray into history of Europe and social and political tensions of the time. How did you decide to purse this project?

Actually, I wanted to tell a story set in the 1920s Berlin since I was a Film student in town and, around 2006, I had already finished a rough exposé about a revue dancer and a murder case. It’s so fascinating to imagine how it must have felt to live back then. From our perspective it’s this short period after the war when Germany was trying to establish it’s first ever democracy for the first time. A hayday of freedom and artistic achievements where a pleasure-seeking new middle-class was trying to live their lives excessively on the one hand and political unrest of left- and right-wing extremists where common on the other. The creepy part of it, from our perspective, is that we know, how this all was going to end later.

It was my interest in the history of the country and the fun and entertainment part of a roaring twenties crime novel what attracted me immediately when Volker Kutscher’s Book was published in 2008. I thought: “Well, know someone has done it!” The novel is such a painstakingly well researched time window into the year 1929 while, at the same time, providing the pleasure of a cool crime novel which isn’t shying away from some genre cliché. I imagined it as a movie first, but when my Graphic Novel “Wave and smile” came out in 2012 and the publisher asked me what book I wanted to do next, It became clear that it will be “Der nasse Fisch” (“The wet fish” means cold case) [Babylon Berlin’s German title].

The publisher and I decided to find a style in black and white. At first, it was an economical choice to illustrate in black and white. But when I startet to look for the appropiate drawing style I found it’s much easier to immerse the present reader in the past by using the atmosphere of contemporary 1920s black and white artwork, movies and photographs. In comparison to my previous book which had a dusty, light watercolor look, I wanted to use a lot of blacks and shadows for “Babylon Berlin”. Which, of course, is also a reference to the noir movies of later decades.

But the black and white style of my book with it’s grainy watercolor shading draws a lot of inspiration by 1920s illustrators like Jeanne Mammen or Russell Patterson whom I really learned to admire. So, I wouldn’t say I prefer black and white but it felt right for this story.

The question often occurs not only because of the TV series but because the original Novel is the first of six books with the cases of Gereon Rath. Volker Kutscher himself, really would love to see at least the second book “the silent death” to be turned into a graphic novel and I like the Idea. We’ll see.

The architectural references and scenes in Babylon Berlin are amazingly realistic. Yet the book happens in a specific period in Germany’s history which is later affected by WW II destruction. How did you accomplish the task of researching the local scenes given this challenge?

This is hard and easy at the same time. “Hard” because you don’t find any building which looks exactly like before WWII in present Berlin. “Easy” because there are so many photographs of that 1920s era that are well preserved in picture books. So that kind of books became my main source for the establishing images of street scenes. Not only for the architecture, but for the depicting of the common pedestrian and the traffic, as well. I was looking for clear shapes and elements which are distinctively different from today.

For example, a lot of typical buildings before the war seem to be one level higher than today because of all the nicely decorated turrets and pediments which had never been rebuilt after the destruction. On the photographs I discovered a lot of traffic lights which had been attached to cables over the middle of street crossings, giant commercial signs and large blinds on the face of the buildings…. These all are things that you don’t find in the Berlin of today. So, I created this vintage impression by emphasizing those kind of elements in the graphics.

Both illustrations and story for this title are written by you. Is this something you prefer? Why did you decide to manage both?

In the German comic scene you don’t have much of a choice. There is no such thing like the comic book writer and the pure Illustrator. Most of the comic artists are both author and illustrator.

After the experience with working on “Wave and smile” for which I had done a lot of research on German military and I’ve had developed the story all on my own I wanted to do something where I could research something historical. I had met Volker Kutscher several times since 2008 and was hoping that maybe he can write the adaptation for the comic book. But he was to busy. So I started to write my version of “Babylon Berlin” in 2013.

I don’t like writing very much,  – for me it’s mostly a necessary process to express what I want to draw later on. Because of that, I was happy to have Volker, the inventor of the original, as a help. Whenever I was unsure about the intention of a certain scene, or the motivation of a character, for example I could ask him. I actually send him several drafts of the comic script and the sketched out storyboard pages to make sure it stayed true to his vision.

Finally, I enjoyed the writing on this book, because I was able to enhance some of the given, already exciting scenes of the novel. It was fun to flesh out some acting and the dialogue of the characters without having to worry about the plot, because the plot was so well crafted in Kutschers original.

What projects are you working on write now which you can tell us about?

Now, I’m working as a commissioned storyboard artist and Illustrator on different projects. For example, there will be a large movie production to start this year where I have to draw lots of storyboads for musical dance scenes.

Do you read comics? What comics are you reading and enjoying right now?

I’m not a comics enthusiast but I grew up with the Franco Belgian classics by Hergé and Franquin. What really stands out and what I enjoyed reading in recent years was DMZ by Brian Wood and Riccardo Burchielli. I liked the episodic, multi-perspective storytelling, powerful drawings and how the city is part of the narrative. What I also liked is the French underground book series “Doggy Bag” by different artists under the label 619, and what I enjoyed because of its atmospheric Pirate setting and dynamical drawings is “Long John Silver” by Mathieu Lauffrey and Xavier Dorison.

Note: Please see our other coverage of crime comics at 15 Best New Crime and Noir Comics To Check Out This Winter.