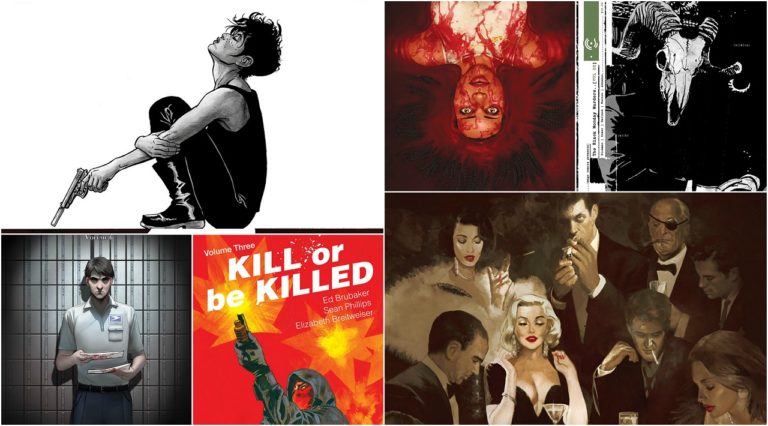 New installments of some of the best crime and noir comics series in recent years are coming up for release this winter and this is a welcome news for mystery comics fans. The upcoming titles include the works of legendary duo by Ed Brubaker and Sean Phillips, illustrator Dennis Calero, and Isaac Goodhart.

The following list represents not only the most exciting crime titles when it comes to the story themes, but also style and execution. It is important to note that the numbering is for referencing purposes only.

Kill Or Be Killed Vol. 3 is one of our favorite picks. This is the third book in a bestselling series by crime comics legends Ed Brubaker and Sean Phillips. It is brutally realistic, cerebral and dark and features a young lost soul named Dylan in New York City. He tries to kill himself one night on the roof of his rent-stabilized building in lower Manhattan.

However, instead of dying, he ends up being a killer: The whys behind this transformation and what happens after the suicide night is what has been happening in the three volumes released so far.

Top Cow’s Postal is another bold series which brings readers into the fictional town of Eden, Wyoming, a place founded by criminals for criminals. A place where, despite its inhabitants, no crime is allowed.

Local postman Mark Shiffron, the main character of the stories, has a peculiar and rare disease called Asperger’s, and through his peculiar eyes we see a town struggling to keep its fragile peace, a town on the constant brink of chaos.

This is a well-done series which a slightly dark theme: The team behind Postal have developed a riveting story, woven around an original concept, that is sure to have you yearning for more.

Postal Vol. 6 gives readers a continuation of its exciting story-line, which includes some brutal struggles between FBI and the bad characters in the series. This installment collects Postal #21-24.

A note of caution for readers expecting the glitzy movie version of Bond: This graphic novel has tried to stay true to the original Fleming stories as much as possible and as a result is far from fantasy version portrayed by the likes of Roger Moore.

In Casino Royal, Bond is sent to a French casino in Royale-les-Eaux, and aims to eliminate the threat of the deadly Le Chiffre by bankrupting the ruthless SMERSH operative at the baccarat table. However, when the luck of the draw favors his enemy, 007 becomes the target of assassins and torturers in a high-stakes game of cat-and-mouse.

Some critics have characterized this series as “something of a cross between The 9th Gate and China Town.” Like China Town, this series has definitely some elements of noir but at the same time, the plot progresses and revolves around murder(s) and the occult nature of the case.

This series’ mixed media approach pours off the page and makes for a ravenous reading experience.

Megan Abbott, the acclaimed mystery writer, along with a team including the author Alison Gaylin,‎ and Illustrators Steve Scott, Rodney Ramos,‎ Lovern Kindzierski,‎ Fay Dalton have developed a retro crime comics story which will be particularly appealing for mystery novel readers.

In Normandy Gold Vol. 1, readers meet the lead character Sheriff Normandy Gold. When her younger sister becomes the center of a brutal murder case, tough-as-nails Gold is forced to dive headfirst into the seedy world of 1970s prostitution in Washington DC.

Babylon Berlin is the graphic novel adaptation of the international bestselling series from Volker Kutscher that centers on Detective Gereon Rath caught up in a web of drugs, sex, political intrigue, and murder in Berlin as Germany teeters on the edge of Nazism.

This book has inspired a highly sought-after TV series, and now a graphic novel as well.

Following an unfortunate incident of manslaughter and at a moment of radical change in Germany, Gereon moves from his old position in Cologne to a new appointment in Berlin. He stumbles into an ever-growing criminal investigation into a pornographic sex ring, discovering that he can trust no one, not even the police.

Set in the 1920s, at the birth of the Weimar Republic amid great economic and political difficulties, this is a tale of corruption, trafficking, and scandal.

James Robinson, one of the industry’s finest writers (Squadron Supreme, Scarlet Witch, Starman) has teamed up with illustrator Tom Feister to deliver the surprising, funny, violent, and sexy tale of romance that comics have been missing.

In Grand Passion, James “Mac” McNamara’s a cop. Mabel’s a crook. They’re two wayward souls, fated to fall in love at first sight: Even as Mabel swears to kill him if it’s the last thing she does. It’s harlequin romance meets hard-boiled crime, as only Robinson and sensational artist Tom Feister can deliver.

As one critic puts it “The story is told by an unknown third person in a very ‘hick America small town’ type of voice.” This gives the story a nice flavor and the illustrations works perfectly with this narration style.

Badlands is a fictional crime drama that depicts the events leading up to the assassination of JFK and examines the longstanding question–was there a second shooter?

Conrad “Connie” Bremen is an ex-con carrying the stench of a sordid, secret past. Connie just wants to get on with his life, but he’s attracting the attention of all the wrong people: the mob, the CIA, and the FBI, just to name a few. They all have plans for Connie, whether he likes it or not–and some of those plans include the murder of a president. For Connie Bremen, the road to Dallas begins and ends here, in the Badlands.

The team behind this title is legendary: This second edition features a brand new cover illustrated by Tim Bradstreet. Steven Grant, the American comic-book writer best known for his 1985-1986 Marvel Comics mini-series, Punisher has written the story and the comics icon Frank Miller is also one of the illustrators.

In Crosswind Vol. 1, a slick and ruthless Chicago hitman. A smart but downtrodden Seattle housewife. When an inexplicable event strikes these two random strangers, their bodies, souls, and lives are switched—to potentially deadly effect. This volume collects Crosswind #1-6.

The series starts with the story of Mia who is a special investigator hired to uncover possible sabotage taking place at a deep-sea research station. What she uncovers is a mind-blowing crime scene filled with suspects with terrible secrets, strange deep-sea creatures, and an impending flood.

In the third installment of the series, Dept. H Volume 3: Decompressed, Mia gets one step closer to solving the murder of her father. But things won’t be that easy, as the small team of survivors but grapple with psychic jellyfish and exposure to mind-altering and potentially lethal pathogens that might just drive them insane before they can reach the surface.

The main plot and the backstory are both sufficiently complex and are set-up well along with an introduction into the murder mystery, characters and potential suspects.

Jimmy’s Bastards Vol. 1 collects the first five issues of a crazy and beautiful story which many critics have been raving about.

Jimmy Regent, Britain’s number one super-spy, has got it all: intrigue, adventure, a license to shoot whoever he likes and beautiful women falling at his feet. He also has a new partner who isn’t quite as impressed by Jimmy as all other women appear to be. Now, there’s a price to pay for Jimmy’s multiple romantic conquests — the results of which are about to come calling in the worst possible way…

From the creator and writer of Preacher and The Boys comes a brand-new series that had to be told in comics form.

Beautiful Canvas Volume 1 collects the first few issues of a 2017 smash hit warped crime miniseries about Lon Eisley discovering the similarities and differences between her job as a hitwoman and her new role as a mother-to-be when she finds out her girlfriend is pregnant.

Going from destroyer to creator/protector is a major swerve, but parents still have plenty of violent and brutal moments to contend with, especially when the world is full of pyrokinetic sleeper agents, animal/hybrid muscle-squads, and one hell of a nasty boss pulling your strings.

From the creative team of Sami Kivela (Abbott) and Ryan K Lindsay (Negative Space, Eternal, DC Writers Workshop) comes this gonzo world of future noir, where the story aims to deliver a brutal blow to your heart and piss in your brainpan.

Following the global success of blockbuster movie Kingsman: The Golden Circle (starring Channing Tatum and Colin Firth), Kingsman: The Red Diamond is a sequel to the hit comic-book series by Mark Millar and Dave Gibbons.

Kingsman: The Red Diamond is a brand new Eggsy adventure as he follows in his mentor’s footsteps, but still rough-around-the-edges for a Kingsman agent.

In this awesome six-issue volume he embarks on a rescue mission to save Prince Philip and unravel an international terror plot, in a story that starts where James Bond draws the line. Rob Williams (Suicide Squad) and Simon Fraser take the helm for this six-issue mini-series. Book One collects issues 1-6.

In Glitterbomb Vol. 2: The Fame Game, Kaydon Klay wants to be famous. She wants it more than anything else she’s ever known. The dream is hers for the taking. All she has to do is embrace the national tragedy that’s put her in the spotlight….The entertainment industry feeds on our insecurities, desires, and fears. You can’t toy with those kinds of primal emotions without them biting back. This volume collects Glitterbomb: The Fame Game #1-4.

If you have not read Incognegro, you definitely should: This tenth anniversary edition of the acclaimed and fearless graphic novel features enhanced toned art, an afterword by Mat Johnson, character sketches, and other additional material.

In the early 20th Century, when lynchings were commonplace throughout the American South, a few courageous reporters from the North risked their lives to expose these atrocities. They were African-American men who, due to their light skin color, could “pass” among the white folks. They called this dangerous assignment going “incognegro.”

Zane Pinchback, a reporter for the New York-based New Holland Herald, is sent to investigate the arrest of his own brother, charged with the brutal murder of a white woman in Mississippi. With a lynch mob already swarming, Zane must stay “incognegro” long enough to uncover the truth behind the murder in order to save his brother — and himself. Suspenseful, unsettling and relevant, Incognegro is a tense graphic novel of shifting identities, forbidden passions, and secrets that run far deeper than skin color.

This story is fast-paced and gripping and the reader is always kept curious about what would happen next. A work of fiction with some elements rooted in history, this is an astonishing work of graphic fiction about a challenging period in the 20th century history. 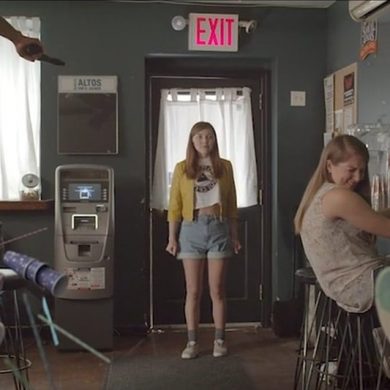