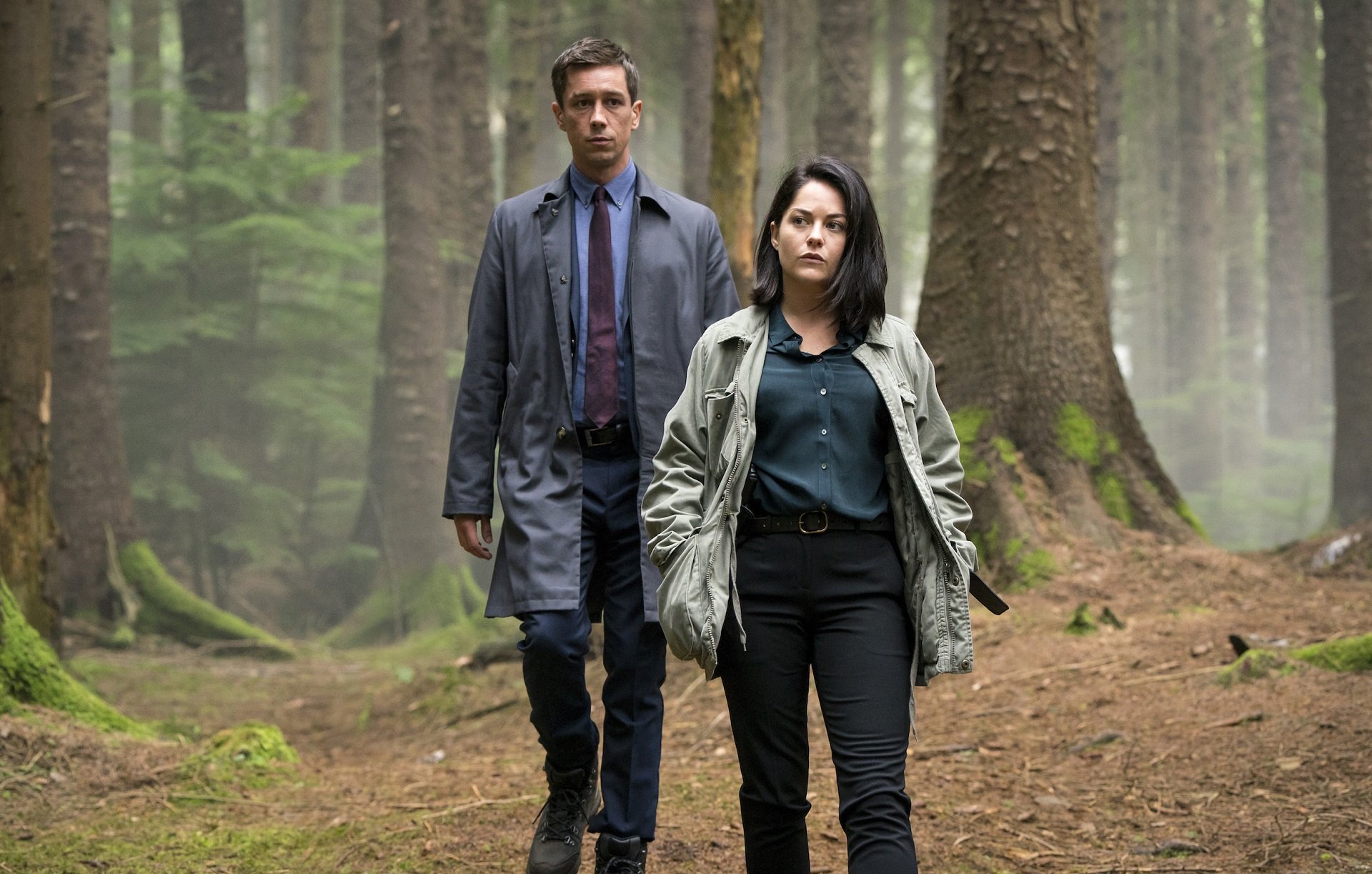 Acorn DVD is a popular destination for those old school mystery fans who prefer to watch British crime and drama series offline. Being part of the RLJ Entertainment group (parnet of Acorn TV), the company offers many interesting titles from the United Kingdom, North American and Australian producers.

We have done the homework for you in terms of identifying the most exciting TV series on Acorn DVD and what follows is our take on 14 best shows that are available via this service.

Note: If you want to check our streaming picks on Acorn TV, our 2020 list is available here.

Doc Martin. Is there a dyspeptic doctor in the house? Successful surgeon Dr. Martin Ellingham abruptly leaves his London practice to become general practitioner in the sleepy fishing village of Portwenn, where he spent the holidays during his youth.

But his luxury car and lavish wardrobe immediately rub the locals the wrong way, and once they get a load of his abrasive attitude and lack of bedside manner, he quickly alienates most of the townsfolk.

The new woman in his life is his assistant, Detective Kristin Sims (Fern Sutherland, The Almighty Johnsons), a by-the-book investigator nearly 20 years younger than her boss’s car, who quickly has to get used to his lone-wolf ways.

As Shepherd adapts to the slower pace of life away from the city, he soon discovers that Brokenwood is a place of secrets and suspicions. Everyone and everything is connected, and the serenity of the countryside can easily be shattered by violence and death.

Dublin Murders. Detectives Rob Reilly and Cassie Maddox find themselves dispatched to investigate the murder of a young girl on the outskirts of Dublin, Ireland.

Based on the books “In the Woods” and “The Likeness” by American-Irish writer Tana French, this psychological thriller features a cast of mostly Irish actors, including Killian Scott and Sarah Greene as the leads. The series follows the detectives, who put their friendship to the test, as they are pulled deeper into the intrigue and darkness that surrounds the case.

Vera. With her caustic wit and singular charm, DCI Vera Stanhope and her trusted right-hand man face a series of captivating murder mysteries set against the breathtaking Northumberland landscape.

Midsomer Murders. Based on the crime-novel series by author Caroline Graham, `Midsomer Murders’ follows the efforts of Detective Chief Inspector John Barnaby to solve crimes that occur in the wealthy, isolated English county of Midsomer, a picturesque and peaceful place on the outside but one filled with amoral and snobbish eccentrics with all kinds of vices.

Chief Inspector Barnaby is the younger cousin of DCI Tom Barnaby who retired in 2011. His right-hand man is Detective Sergeant Jamie WInter, who is young, keen and smart as a whip. ‘Midsummer Murders’ is the UK’s longest-running contemporary detective drama, having aired on ITV since 1997.

Foyle’s War. As World War II rages on, criminals try to take advantage of the resulting chaos. In Hastings, they aren’t having much luck, thanks to Detective Chief Superintendent Christopher Foyle. As Foyle’s son Andrew, a fighter pilot in the RAF, fights the enemy at war, Foyle battles the black market, profiteering and murder on the home front.

He is dogged in his pursuit of justice, honest to a fault and frequently underestimated by his opponents. Following the war, Foyle takes on a new role as a senior intelligence officer, and he focuses his attention on the world of espionage in support of Britain’s security and defense.

Dixon of Dock Green. A classic long-running series now on DVD. This is a BBC television series about daily life at a fictional London police station, with the emphasis on petty crime, successfully controlled through common sense and human understanding. The central character was a mature and sympathetic police constable, George Dixon, played by Jack Warner in all of the 432 episodes, from 1955 to 1976.

Broadchurch. When the corpse of an 11-year-old British boy, Danny Latimer, is found bloodied and dirty on an idyllic beach, a small Dorset community becomes the focus of a police investigation and media madness.

Out-of-town Detective Inspector Alec Hardy gets the point position over Detective Sgt. Ellie Miller — who feels the job should have been hers. Now she must engage in an efficient working relationship with taciturn Hardy.

Slowly, more members of the community of Broadchurch are drawn into the investigation, with a telephone engineer drawing great attention when he admits to a special connection to the case. While dealing with so much unwelcome attention, Danny’s family tries to cope with its grief. When a suspect is named and charged, the ensuing trial sees the defendant promising to expose more of the townspeople’s secrets.

Miss Fisher’s Murder Mysteries. Fledgling detective Phryne Fisher is known for her sharp wit and pearl-handled pistol, which she uses to fight injustice in Melbourne during the 1920s.

The glamorous sleuth makes her way through the city’s alleyways and jazz clubs while she fights crime as part of a larger mission — making sure that Murdoch Foyle, who she believes is responsible for the disappearance of her younger sister, stays behind bars. She fights for justice for people who can’t help themselves, including exploited workers and missing girls.

Ripper Street. Jack the Ripper was a serial killer who butchered a number of women in and around the Whitechapel District of London in 1888.

This drama begins about six months after the final murder, with now-peaceful East London hoping that the reign of terror is over. Among the hopeful are members of H Division, the police precinct tasked with keeping order in the district, including Detective Inspector Edmund Reid, a forward-thinking detective haunted by a past mistake that ended in tragedy.

While trying to keep order in the chaotic streets of Whitechapel, Reid is soon drawn into the seedy criminal underworld of Victorian London, where each new murder elicits fear that the Ripper may be back.

Rellik. “Rellik” unravels the obsessive hunt of U.K. police detective Gabriel Markham to find the serial killer who left him both physically and mentally scarred. Telling the tale backward, it begins with the capture of the killer, and reverses from kill to kill to the very beginning of the murderer’s spree.

Gabriel and his partner, Elaine, form an unlikely duo, with Gabriel pulling out all the stops to track down the person that left him disfigured, and Elaine the bright yet eager-to-please sidekick.

Line of Duty. At Anti-Corruption Unit 12, police officers Steve Arnott and Kate Fleming, with the help and oversight of Superintendent Ted Hastings, investigate possible corruption within the Central Police force.

London Kills. London’s best detectives take on its worst crimes in this sleek British mystery series from the creator of Suspects. Veteran DI David Bradford (Hugo Speer, Father Brown) heads an elite murder squad, but he’s been on leave following the unexplained disappearance of his wife.

In his absence, ambitious DS Vivienne Cole (Sharon Small, The Inspector Lynley Mysteries) has been leading the investigations, and when Bradford returns to work, the two clash over their methods and lines of inquiry.

Together, the team probes the staged suicide of an MP’s son, a groom killed at his bachelor party, the corpse of a married man discovered by his mistress, and a body washed up near the Thames.

The only case David can’t crack is the most personal to him—until one of their investigations uncovers evidence linked to his missing wife.

Marcella. This is a must-have DVD pack if you’re into atmospheric stories. Acclaimed writer Hans Rosenfeldt continues his first British drama following the international success of the Swedish/Danish series “The Bridge.” Anna Friel stars in the lead role of Marcella Backland, a British police detective working in contemporary London.

Set in Rosenfeldt’s unique style of “Nordic noir,” the body of a missing child is discovered inside a wall and a task force is assembled to catch the killer.

A complex set of characters from all walks of life and interweaving storylines take viewers on a dark and emotional journey with turns at every corner.