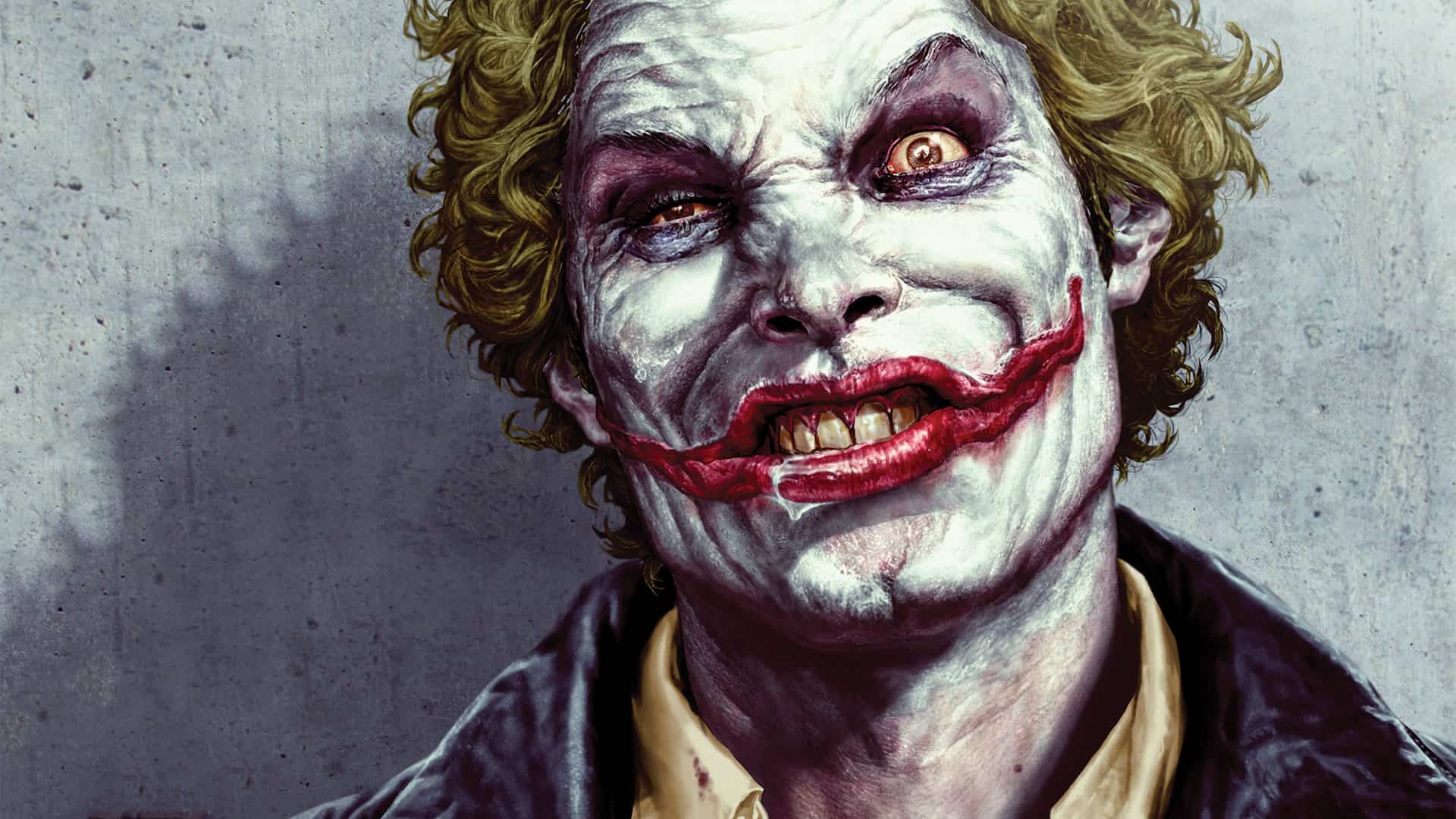 For fans of the new Joker movie who are craving for more, we have compiled an exciting collection of best comic books and graphic novels featuring Gotham’s famous villain. These picks include stories from iconic names like Brian Azzarello and Alan Moore as well as notable classic titles. Where to start? If you’re new to the space, we suggest you start with Batman: The Killing Joke or

Joker. Written by Brian Azzarello with art by Lee Bermejo, this is one of our top picks for this list and essential read for all Batman fans. Brian Azzarello brings to The Joker all the visceral intensity and criminal insight that has made his Vertigo graphic novel series 100 Bullets one of the most critically acclaimed and award-winning series of all time.

This original graphic novel tells the story of one very dark night in Gotham City. The Joker has been mysteriously released from Arkham Asylum, and he’s none too happy about what’s happened to his Gotham City rackets while he’s been “away.”

What follows is a harrowing night of revenge, murder and manic crime as only The Joker can deliver it, as he brutally takes back his stolen assets from The Penguin, The Riddler, Two-Face, Killer Croc and, of course, The Batman, and heaven help them all. Told through the eyes of his loyal (but naive) henchman Jonny Frost, JOKER is a true noir crime novel: a harrowing journey into a city of rain-soaked streets, dirty sheets and nothing but bad choices. 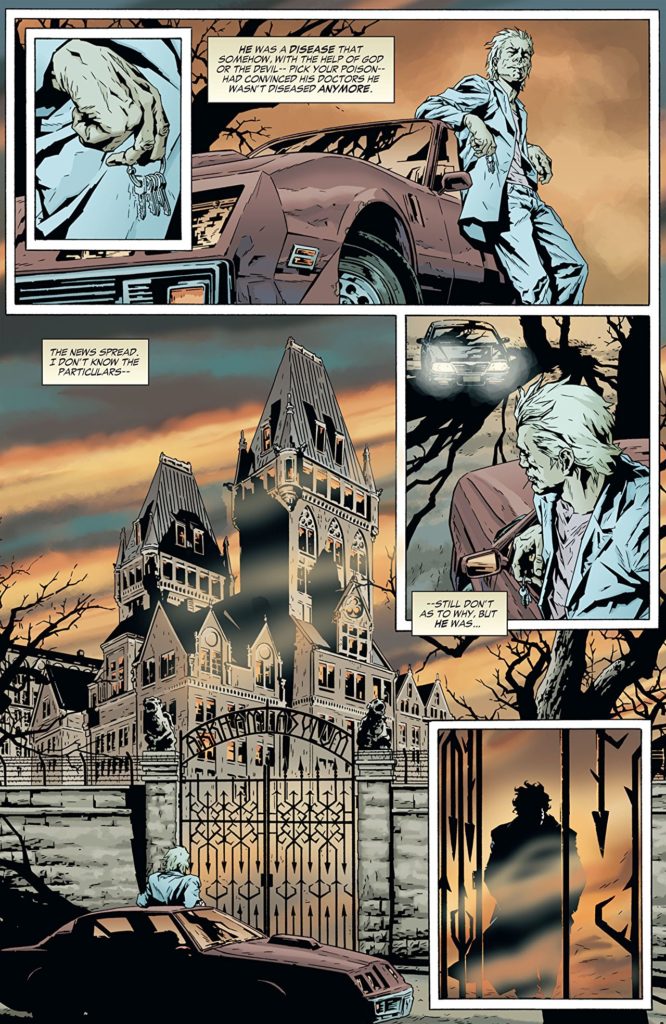 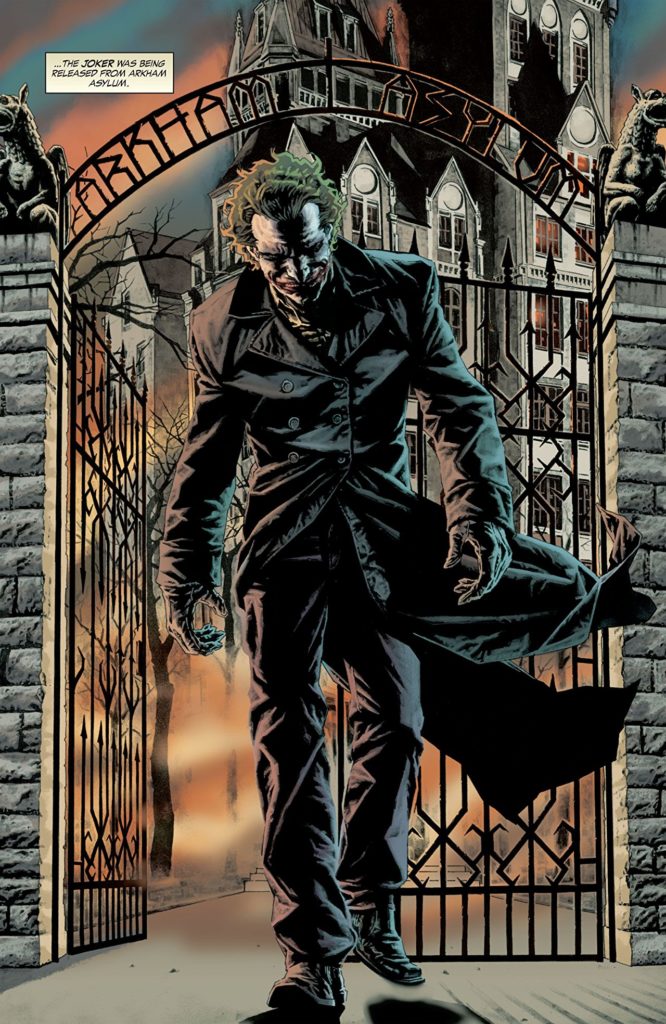 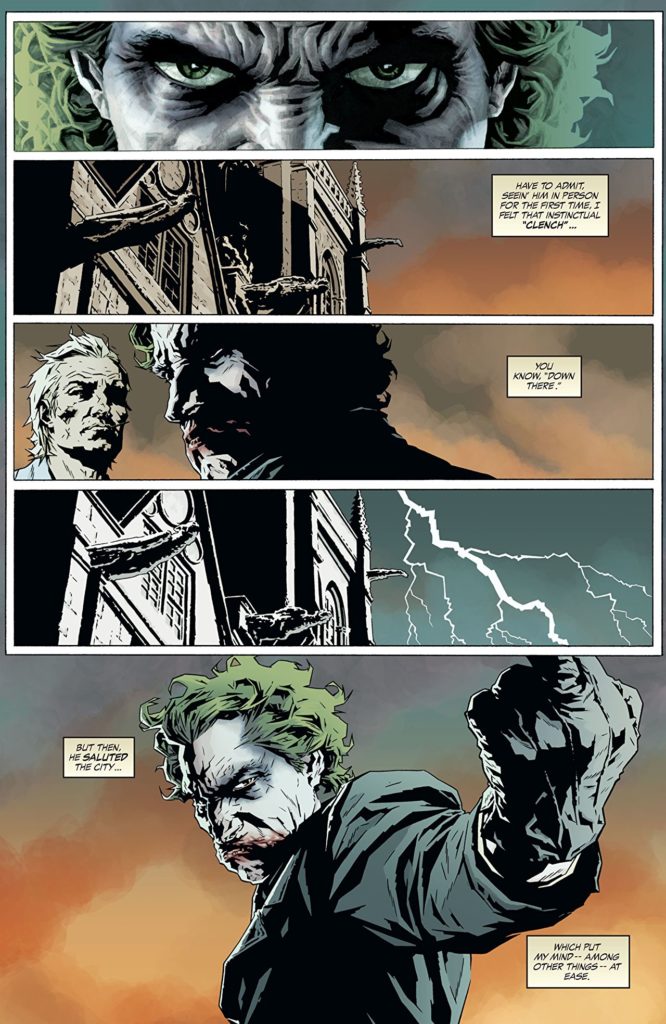 Batman: The Killing Joke. This is another one of our favorite titles and a NY Times bestseller. With stark, stunning new coloring by Brian Bolland, this is Alan Moore’s unforgettable meditation on the razor-thin line between sanity and insanity, heroism and villainy, comedy and tragedy.

According to the grinning engine of madness and mayhem known as the Joker, that’s all that separates the sane from the psychotic. Freed once again from the confines of Arkham Asylum, he’s out to prove his deranged point. And he’s going to use Gotham City’s top cop, Commissioner Jim Gordon, and the Commissioner’s brilliant and beautiful daughter Barbara to do it.

Gotham Central Book 2: Jokers and Madmen. Witness the gritty side of the Gotham City Police Department from their perspective, as they take on psychotic criminals like The Joker and grudgingly look to The Dark Knight for help.

This volume collects two cases of the Gotham Special Crimes Unit. First, The Joker terrorizes the city at Christmastime when he begins randomly executing people with a rifle, and no one from the Mayor on down is safe. A second story focuses on an old case and unfinished business for disgraced detective Harvey Bullock.

Joker: Last Laugh #1. This is the first installment in a six-part story. The Joker receives some shocking news while under lockdown in the Slab: he has a malignant tumor in his brain and is going to die. But it’s not like the Clown Prince of Crime to bow out without putting on one last show–and he kicks it all off with a prison riot.

Joker’s Asylum (2008-2010): Clayface. This is the first installment in a ten-part series. The Joker gives readers a look into the life of Clayface with the film “The Terror” and the Children of Clay that idolize the shape-shifting villain.

Joker/Harley: Criminal Sanity (2019-). In Gotham City, where heinous acts of violence are a daily occurrence, the GCPD relies on Harley Quinn, a young forensic psychiatrist and profiler, to consult on their toughest cases. But Harley is haunted by one unsolved case-the night she discovered her roommate’s body marked with the signature of a notorious serial killer known as The Joker.

Five years later, the case remains unsolved and a new series of horrific murders occur throughout the city. As the murders escalate, Harley’s obsession with finding the depraved psychopath responsible leads her down a dangerous path. When the past and the present finally collide, Harley has to decide how far she is willing to go-and how many lines she is willing to cross-to solve these cases once and for all. 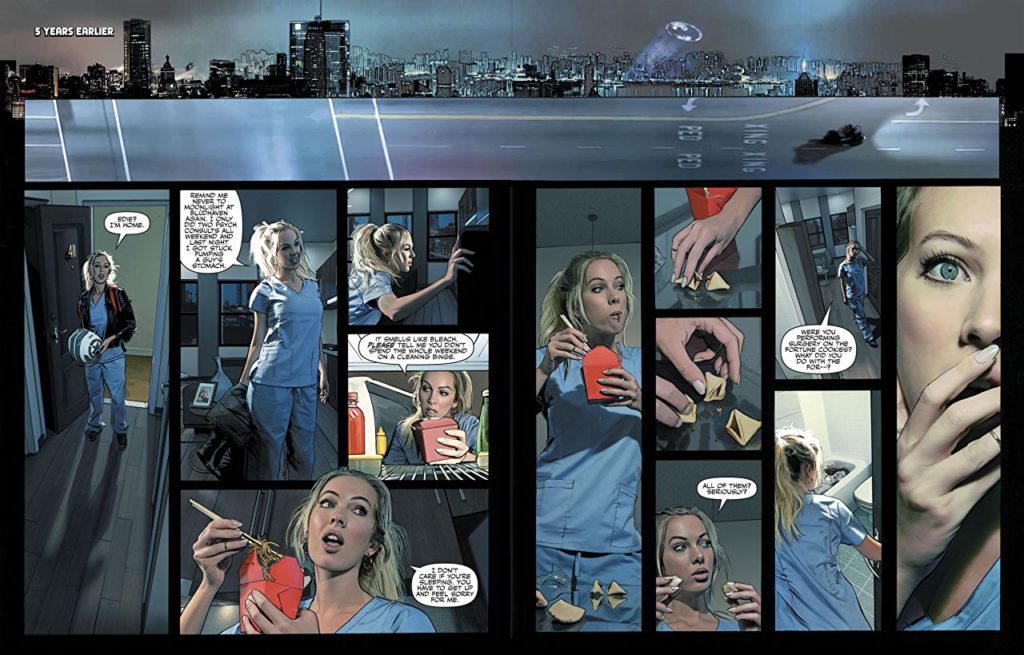 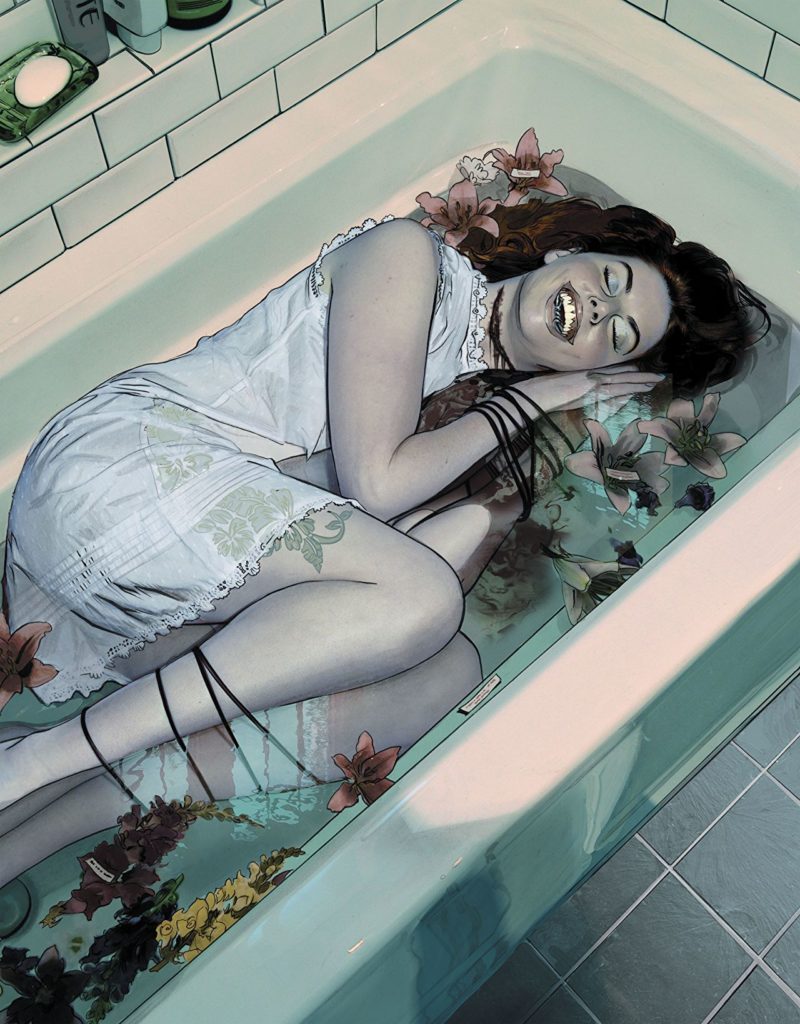 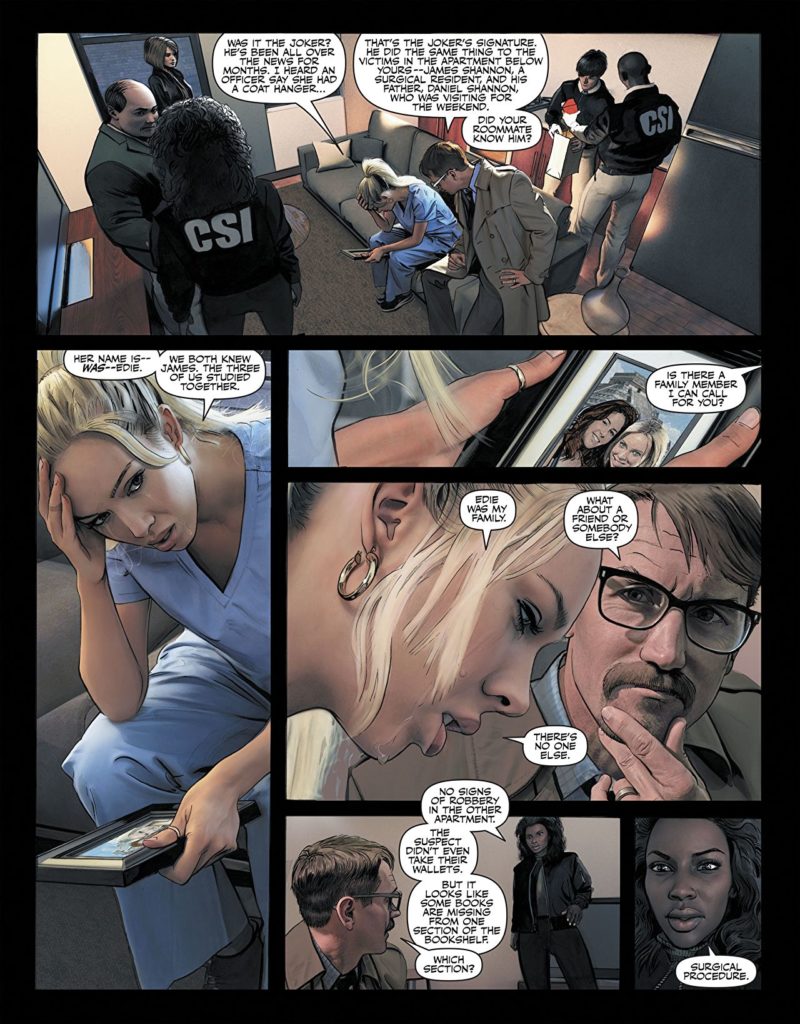 Batman: I, Joker #1 (DC Elseworlds). This is an Elseworlds tale. In the year 2083, the legend of the Batman sparks a strange and deadly religion based on the Dark Knight. As the annual death race between the religion’s leader and a group of sacrificial “lambs” surgically altered to resemble Batman’s greatest foes approaches, one would-be Joker tries to break the cycle and become the true inheritor of the heroic mantle of the Bat.

The Joker (1975-1976) #6. The Joker battles wits with the World’s Greatest Detective-ut this time we don’t mean Batman! An actor convinced he is the great Sherlock Holmes chases after the Clown Prince.

Joker: Year of the Villain (2019-) #1. In the Year of the Villain, what’s a Clown Prince of Crime to do when the world has started to accept doing bad as the only way to live? Out-bad everyone else, of course! The Joker is on a mission to get his mojo back and prove to the world that there is no greater villainy than the kind that leaves you laughing.

This special one-shot is co-written by legendary film auteur John Carpenter (The Thing, Halloween) and Anthony Burch (the Borderlands video games), making for a Joker comic that’s twisted in ways you never imagined.

Superman: Emperor Joker. It’s another typical day in Gotham City. Superman, the world’s most dangerous criminal, has burst free of his cell in Arkham Asylum. The only one who can track him down is the world’s greatest hero, Bizarro. Their epic battle destroys property owned by the bald but brilliant billionaire Lois Lane…wait—what?!

If Superman isn’t crazy, that means the whole world has gone insane, and only one man can be responsible. Somehow Batman’s greatest nemesis, the Joker, has received the power to reshape reality to his own mad whims. The world now is defined by chaos and death, and there is absolutely nothing anyone can do about it.

It’s impossible to defeat a god. Unfortunately, someone forgot to tell Superman. Armed with nothing more than his will, the Man of Steel will put an end to the reign of Emperor Joker or die trying.

We are Robin (2015-2016) Vol. 2: Jokers. All over Gotham City, teenagers came together with the common purpose of protecting their home. Drawing inspiration from the teen heroes who’ve fought at Batman’s side, they wore his colors as they fought against crime and corruption. They were vigilantes. They were heroes. They were Robin.

But now being a Robin means being a criminal. Robin colors are illegal, and the Robins have gone back underground. Some of them—like Duke Thomas, on a quest to find his parents—have other things on their mind. Some of them are exploring new, more dangerous ways to become vigilantes.

In the void left by the Robins’ absence, a new group of teens has taken control of the city streets…but they don’t draw their inspiration from the forces of good. Led by a sadistic killer with a permanent grin, these Jokers are paying tribute to Batman’s deadliest adversary…and they want to see the entire city die laughing. When the Jokers strike, will the Robins fly once more?

Batman Arkham: Joker’s Daughter. Duela Dent claims to be the child of many of Gotham City’s most infamous super-villains, including Catwoman, Scarecrow, the Riddler and the Penguin, but there’s one name she is always known by: the Joker’s Daughter! This mysterious young woman started out as a villain and became a heroic member of the Teen Titans before finally returning to her criminal roots. Batman has learned that when dealing with the Joker’s Daughter, it’s best to expect the unexpected.