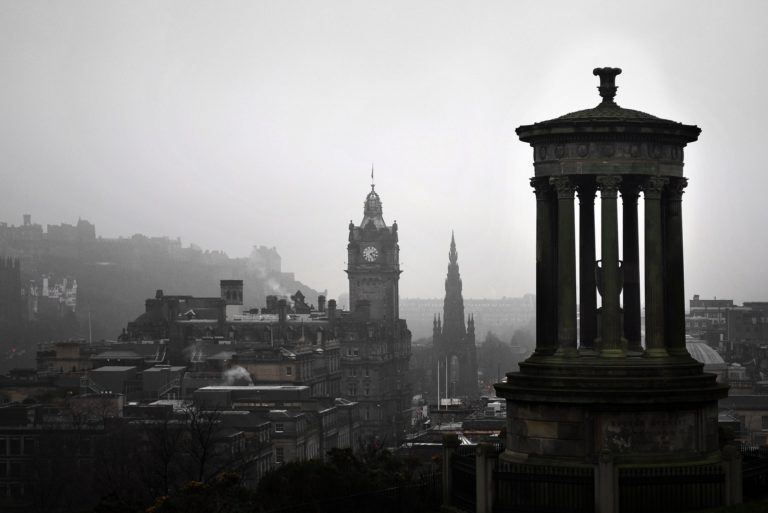 Crime fictions from Scotland have seen a phenomenal surge in popularity in the last 10 years and and authors like Ian Rankin or Quintin Jardine are household names in many countries. They are certainly not alone: Edinburgh seems to be a favorite backdrop for the activities of countless detectives; Glasgow isn’t forgotten with novels by Denise Mina and Stuart MacBride bases his stories in Aberdeen. And of course we mustn’t forget that Sherlock Holmes was the product of a Scottish writer and inspired by an Edinburgh pathologist.

What comes below is a list of 10 new hot releases set in Scotland which will make great additions to your thriller bookshelf:

Rather be the Devil by Ian Rankin

The master of Scottish crime fiction teams up his two most famous detectives (though one is obviously more famous than the other), John Rebus and Malcolm Fox in Rather Be the Devil. Rankin’s latest sees the duo come up against infamous gangster, and Rebus hater, Big Ger McCafferty.

Out of Bounds by Val McDermid

The latest in the Karen Pirie series has the lead detective of the Historic Case Unit (HCU) as various incidents lead her to reopen unsolved murder cases from 1994 and 1996. Out of Bounds is another pulsating Edinburgh thriller from one of the best crime writers in the business.

Jack Parlabane, the Scottish journalist who just can’t manage to stay out of trouble returns for a seventh outing in Black Widow. All of Brookmyre’s best moves are present here, with snappy well observed dialogue, female characters that aren’t just there to prop up the hero, and in Parlabane, one of the best representations of the good, bad, and ugly sides of journalism.

The Blade Artist by Irvine Welsh

While not a crime thriller in the purest sense, Irvine Welsh’s latest novel set in the Trainspotting universe is set up like a detective novel as Francis Begbie returns to Edinburgh, under the guise of artist Jim Francis. It’s Welsh’s best book in years and is a great contrast to the police-led thrillers on the rest of this list.

In the Cold Dark Ground by Stuart MacBride

If you want something a little different than the Glasgow and Edinburgh set thrillers then look no further than Stuart McBride’s Detective Sergeant McRae series. Set in Aberdeenshire, McBride’s latest novel, In the Cold Dark Ground has the reluctant DS McRae investigating a murder after discovering a dead body that is about to make his quiet little patch a whole lot noisier.

D.I. Alex Morrow returns in Blood, Salt, Water, as she investigates the disappearance of Roxanna Fuentecilla: a woman that Morrow and her team had been shadowing as part of an investigation into drugs and money laundering.

In the whopping 17th instalment of the No, 1 Ladies Detective Agency Precious Ramotswe and Grace Makutsi help a woman try to piece together her past by finding a missing loved one with nothing to go on but a faded photograph. They’ve done more with less.

The Darkest Goodbye by Alex Gray

What Rebus is to Edinburgh DCI William Lorimer is to Glasgow. Alex Gray has thrown down the gauntlet when it comes to excellent crim thrillers set in Glasgow and, like Ian Rankin does with Edinburgh, Gray makes the city a character in and of itself. The Darkest Goodbye is only the latest example of Gray at the height of her talent.

If your tastes are less contemporary and more period based then Beloved Poison is the novel for you. Written by Edinburgh University lecturer E.S. Thomson, the novel is set in a crumbling hospital in the 1850s as pharmacist Jem Flockhart discovers six tiny coffins with nothing but dried up flowers, what follows is a tale of gothic tinged murder.

None But the Dead by Lin Anderson

The eleventh instalment in the Rhona MacLeod series, the forensic expert is called into the island of Sanday when the remains of a child are found in the local primary school which may have links to the death of an old man in Glasgow. With None but the Dead, Lin Anderson proves that Tartan noir is genre for the best crime fans.